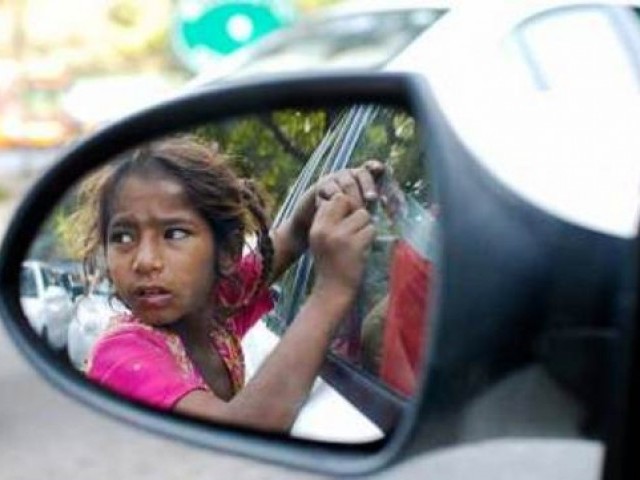 “Even if we’re begging, it’s not as if we’re stealing or looting.”

These were the hard hitting words of the signature beggar in my film Beggars of Lahore.

The film was shot in the Summer of 2005, initially as part of an MPhil thesis, the interest for which arose out of my hybrid origin as a British Pakistani trying to come to terms with the intense scale of begging within the walled city and cultural hub of Pakistan, that is Lahore. I, too, couldn’t understand why people scorned upon the beggars so much for merely pleading poverty. I later also learned that begging is criminalised according to a Punjab Ordinance Act inherited from colonial rule.

Eleven years later I am now based in Karachi and in both sight and sound, the begging scene hasn’t changed. I see the same poverty as I saw in Lahore, again manifested in the begging phenomenon. Beggars can be seen at traffic light intersections, in and around the bazaars, outside restaurants, anywhere where there are potential donors. I hear the same sort of pleas when I am out and about in the city.

A child, as if with all the worldy wisdom will often say,

(Sister, give me Rs10, God will make your life better.)

An older person will offer a blessing in return for money,

(My child, God will make you wealthy; help a poor person.)

A transgender beggar will at first flatter you and then, when you don’t give anything to them, a series of curses will follow.

Amidst these blessings and curses, the fierceness of the begging industry is only getting fiercer. With regards to the number of people engaging in begging as a livelihood, this is a statistic which is unascertainable as a result of the peripatetic and fluid nature of this demographic. However, in terms of figures we do have, they are of some concern. According to a statistic released earlier this year by the ruling party, 60 million Pakistani citizens are currently living below the poverty line.

As a concept and in practice, begging is a complex, ambivalent phenomenon which can be witnessed all over the world but in terms of scale remains larger still in developing countries such as Pakistan.

Within the context of Pakistan, people are often divided on their views on begging, creating a dichotomy of standpoints; those who empathise with the issue and those who are critical of it. The phenomenon cannot be understood in a binary fashion as there are so many complexities attached to it. Causes for it are multi-dimensional, ranging from socio-economic to crime. Likewise, the beggar does not belong to a homogenous group. The beggars are heterogeneous in nature belonging to many different categories, from child beggars to adolescent beggars, the elderly and the disabled to name but a few. Further, the motivation for begging amongst these two groups also differs and to name again a limited number of reasons, these can range from socio-economic need to an allegiance with illegal networks.

In the realm of efforts to alleviate child poverty, initiatives such as the Child Protection & Welfare Bureau (CPWB) are praiseworthy with regards to curbing and thereby protecting children against the practice of begging. The operation which was established by the Government of Punjab, back in 2004, is expanding. However, despite, an organisation such as the CPWB along with efforts by NGOs, child begging persists. Moreover, as noted earlier, the begging phenomenon is not exclusive to children, this is a heterogeneous demographic and outreach efforts should be introduced that are inclusive of all sections of the begging population.

With regards to the blanket overlooking that takes place by many who link begging to a mafia and therefore believe the begging phenomenon is not real, this mind set needs to be sensitised to the fact that if people are working for a mafia then there must be a grave need for them to be exploited in order to beg for a third party, receiving only a fraction of their earnings. Hence, alongside coordinated efforts between the state and the private sector in continuing outreach, emphasis on the legal implementation of protecting people from exploitation of illegal networks also needs to be prioritised.

The writer is an assistant professor of media and communications at IBA’s Department of Social Sciences and Liberal Arts. She tweets @drshebasaeed [twitter.com/drshebasaeed]

A father, a daughter, and the tug of being in three places at once