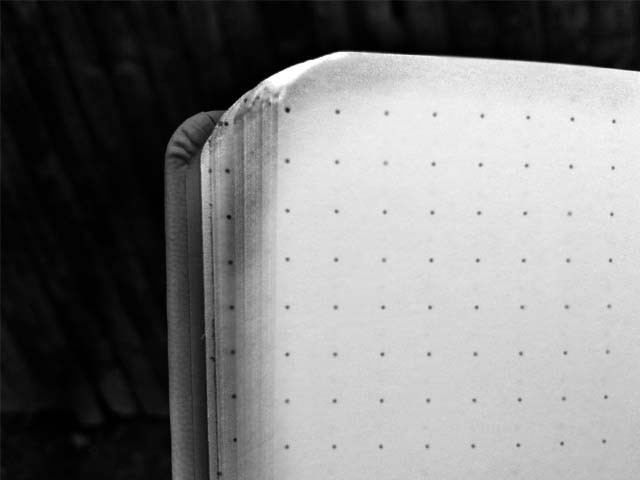 “What about the rest of the dots in the notebook? Have you seen so many deaths?”

He picked up his notebook, and he saw that it was filled with equidistant dots, page after page.

“What does each dot stand for?”

“Every life that left due to a man-made cause.”

“Whose life does the first dot represent?”

“My maid’s son. When I was seven, I saw my grandmother embrace his mother. In that embrace, in that uncontrollable grief of a mother, her tears trying to fill up the void left by her son, and my grandmother’s attempts to soothe her with words, silence and both, I realised an absence. But as time passed, my maid was the only one who saw her son’s silent disappearance, felt it, lived with it, and sometimes inside it. For the rest of us, we only remembered him when his name was mentioned or when we saw his outline in his mother’s moist eyes. That ease with which loss was replaced inside me, made me uneasy. And so I made a dot to remember him.”

“What about the rest of the dots in the notebook? Have you seen so many deaths?”

“No, only some. As I aged, and I began to read the newspaper, history books, and watch television, I heard daily about people dying. In road accidents. In blasts. In firing. In rivalries. In hate.”

“But so many people died? How do you keep count?”

“As I began to read more, my dots began to stand for more than one life. Somehow the dot always seemed to take everyone in. The number(s) didn’t matter. As I read about wars of the past and the present, the dots began to represent a hundred lives, sometimes a thousand lives.”

“I don’t know. The number of lives which have been cut short by us can never make sense, but I just want to try. Try to somehow remember them. Without knowing them. Without differentiating the cause. Without putting them in different categories of age, gender, caste, status. And remember each life as an equal loss to all of us. So, not only those whose pictures and epitaphs are carried by newspapers, those with marked graves, whose mourning is a public ceremony, who left behind legacies, whose works produced a hundred/thousand others, but also those who left behind no trace, who the media mentioned in numbers and not by name, who were too ordinary to be known, too common-place to make a difference, too soft to produce a ripple in any institutions or existing theories. But they were remembered by their loved ones in the heat of a long afternoon, during sleepless nights, in the sound of water, in the orange hue around a setting sun, in the length of a child’s smile, a shy wrinkle, the slightly bitter taste of a tear, a lesson and often in an incomplete thought.”

He listened and with a strange mix of anxiety and excitement, began to open other notebooks, and saw some of them had words. No sentences. No paragraphs. Just words. Familiar but unrelated. Some standing and others crouching next to each other.

He shook his head, and started reading from one.

As he finished reading the story, he put the notebook aside,

“What are you trying to do? Do you even know what it means to suffer?”

“A thousand people have died over the last few months. And tens of thousands of families have been permanently broken. Their experiences and ours have diverged permanently. The way they look at the world, the way oncoming generations will is altered. It’s become part of their past and for you, it’s a word and a dot, which you think is a story. But for them, there is no other narrative. No other tale. No other past. While they suffer, all you care about is penning stories.”

“It’s what I think is my capacity and my purpose.”

“But what will these words do? What have they ever done?”

He looked down at his notebook and each word looked back. A hundred and fourteen characters, all with different eyes, expressions, and fully alive to the conversation.

Tell him, the words whispered.

Yes, tell me, he said. He had heard the whisper, too.

And so he asked the words to tell their story,

“We bring ourselves into this broken and beautiful world.”

“Because a person’s speech and/or writing is a window into their thoughts.”

“Are all words windows?”

“No, we take up numerous shapes and forms. Some of us are doors with handles and some without. Sometimes we are pillows which you cling onto when uncertainty hovers. Streams of light you clasp when darkness penetrates your sight. Soft wedges which fix broken beings and relationships. Firecrackers delighting you instantaneously and disappearing as if we had never existed. Crutches which aid you. Clothing that you adorn yourself with. Pallets which you choose your traits from. We can be sponges to dry streams of tears. And some of you use us to elevate yourself and others to compress themselves, firmly but politely from the shoulders.”

“But all of you are imaginary.”

“Yes, but we ignite associations in you. When you hear “beautiful” it’s just a nine lettered word, but you make it come alive.”

“How? What came first, the word or its association?”

“We don’t know. But we know that each time you saw your mother’s smile, saw the leaves move (ever so slightly), trees shake with zeal, felt the wind caress you, saw a broken man find a needle and a thread, saw Him in a million faces, you would have wanted a word, which could capture what you had felt.”

“But do you capture all our feelings?”

Each word smiled at the question, the listener was intelligent, they thought, and continued,

“No, each time you say the word beautiful, we come to you, but we are just a cue, the real action happens when you absorb us to produce a thousand different images. We only give what you pack within us. Nothing more. Nothing less.”

“But don’t words mix with each other over time? Doesn’t what is beautiful cross over into the domain of other similar words?”

“What do you mean?” The words asked, getting excited at this cross-questioning.

“When I see a man in regret, fighting silently within himself, day in day out, and finally emerging just to realise that a bigger fight awaits him, I feel so many feelings at once and I am at a loss for words, and the word, beautiful, is what appears.”

The words smiled and admitted their inadequacy,

“If we had each thought packed inside us, then we won’t have enjoyed racing towards you, it’s because of what we find inside your mind and how we are transformed by it, that we are so receptive to your calls. But in all of this, please remember that it’s not us (words) which do so much, it’s how we are sent out and how we are received. Sometimes words which are soft can be said in ways which make them impregnable, and sent outward with such vile that they scar the listener. These vile words often find a life of their own and chase the sender for quite some time. And sometimes words which are rough, unkempt, and invulnerable are said so sweetly, softly, and lovingly, that it melts the word in the process, and the listener not only hears us but also our struggle, and feels our transformation.

And don’t get boggled with our numbers. Sometimes people drown themselves with our help, shoving us in thousand on top of them, lying listless below our weight, but it often only takes just one of us to lift the individual back again.”

He nodded, and smiled.

“I’m sorry, but somehow I’m not convinced,” he said.

“A word can never bring back someone. Neither can it fill our insatiable longing for love, nor satisfy the infinite range of our feelings. All of you are inadequate attempts to dive into a sea which has no regard for a coastline, nor for instruments which may want to measure its depth.”

The words nodded; maybe they had said what had to be said.