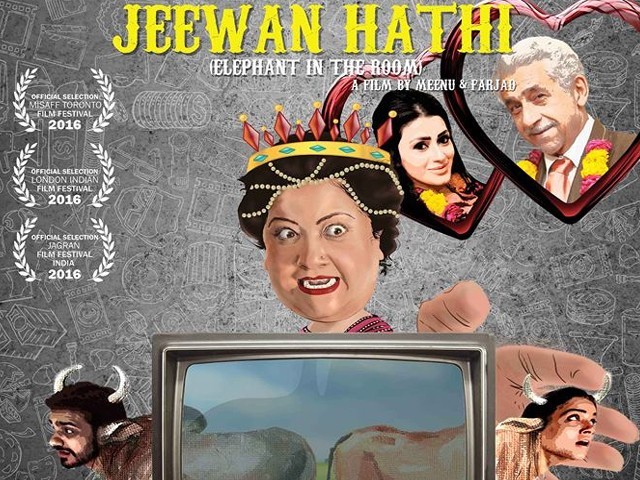 There are some actors that directors and writers depend on a bit too much, even more than they should. Everyone in Pakistan wants to be the next Anwar Maqsood and Moin Akhtar (late) combination. But it’s not as easy it sounds. I suppose Fasih Bari Khan thought he could build the same association with Hina Dilpazeer.

Jeewan Hathi revolves around the lives of people involved in the television industry; an ageing TV hostess (Hina Dilpazeer) and the owner of a famous TV channel she is married to (Naseeruddin Shah).

The movie is about how Dilpazeer feels once she discovers that her husband plans to replace her with a much younger presenter and give her a grander morning show. He also plans to marry the replacement.

Naseeruddin Shah as the owner of a famous TV channel.

Jeewan Hathi also features a married couple that participates in a morning show to win a 60 inch colour LED TV. The movie  goes on to unveil what happens when the media gets involved in their lives.

A married couple that participates in a morning show to win a 60 inch colour LED TV.

Performance wise, Jeewan Hathi is a terrible attempt. Hina Dilpazeer is a huge let down. Considering the level of performance she delivered earlier this year on a small screen, Jeewan Hathi is anything but impressive. She wasted her opportunity by not doing justice to a character that had so much potential; a range of emotions and expressions that were not successfully conveyed. Naseeruddin Shah only emerges in the movie for two scenes and a song; thus, his character is wasted as well, as his capabilities were not utilised efficiently. Considering Naseeruddin Shah’s calibre, Jeewan Hathi is one of his below average characters.

Adnan Jaffar is bad, he’s good looking but he seems to enact the same role he played in Jalaibee. Samiya Mumtaz is just passable. Saife Hasan is simply unbearable; he gets on your nerves. The only actors who performed fairly well are Fawad Khan and Kiran Tabeer.

With respect to directing, Meenu Gaur and Farjad Nabi fail to add any substance – to the extent that I’m not even sure if they took that part seriously, considering it just didn’t add up on screen.

Jeewan Hathi is an attempt at comedy, featuring a horrible script under the guise of wit. Most of the jokes surround the sizes of the blouses women from Pakistan and India wear. Secondly, the movie is sleazy and distastefully vulgar, which adds to how disappointing Jeewan Hathi is. Comedies that involve sexual content can be successful, provided that it is derived by a mind that can develop the content maturely.

In Jeewan Hathi’s case it’s just plain bad. The writer and actors thought the audience would find humour in jokes involving ‘chaddi’ and ‘baniyan’ sellers or by using the term ‘sissy’. Come on – the audience isn’t interested in watching a clichéd and immature sense of humour comprising of juvenile jokes, repeated accents, and below average entertainment on a silver screen.