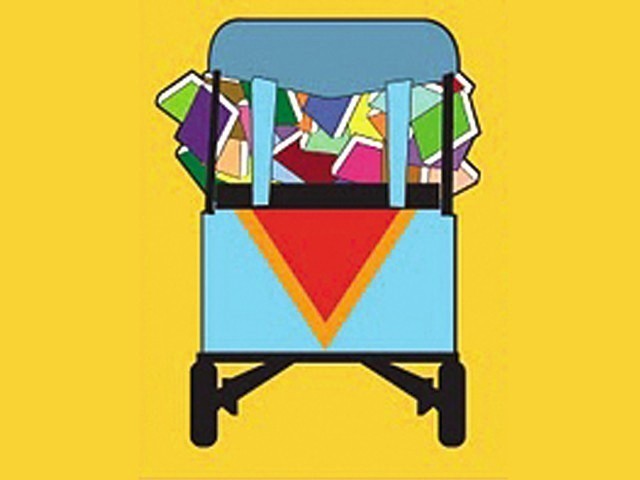 The turn-out showed how much events of this nature are appreciated.

I roped in some friends from my English Literature class to tag along with me to the Karachi Literature Festival at the Carlton Hotel this weekend, and we witnessed some enlightening talks and poor event management.  We managed to catch the last bits of a talk on literature and extremism and therein began the bad.

The talk was less of a discussion and more a press/socialite event with people standing around chatting to each other and cameramen rudely pushing their way around. Can someone please explain to me why journalists who were meant to cover the event were the ones that couldn’t keep quiet despite Raza Rumi’s appeal to silence the crowd?

We were disgusted and left to attend Bina Shah’s book launch, Slum Child.

To my pleasant surprise, Shah proved to be eloquent, witty, and charming. I was instantly charmed and rushed to buy her book which I was lucky enough to get signed later. At the session’s close, she read out an excerpt from Slum Child, which I managed to record on my phone, despite being wrapped up in the story. She intoned, as if she was relating a personal experience, rather than a character in her book:

“Swinging my braid over my shoulder…I liked to do this ten times an hour, its weight and thickness pleasing me greatly …I didn’t mean to step in the filthy water overflowing from the drain, stinking of urine and excrement and chemicals. The whole slum smelt like that anyway and I didn’t want it on my skin as well.”

The food setup was simply abysmal. It was crammed in the same area as the book stalls. We chose not to eat there and instead settled for the ridiculously overpriced café inside the hotel where despite sitting for about 45 minutes, we never managed to get our table cleared. Half an hour went by and we were brought one cookie, which apparently came with my coffee. Still as hungry as we’d been before, we headed to the ballroom to catch Mohsin Hamid and once again Bina Shah.

Chilling performances but no gore

We weren’t late because all the panels were running one hour later than the prescribed time. We caught the ending of the Ajoka panel, and the play on Bulleh Shah and Aurangzeb Alamgir. Luckily for me, there weren’t many people sitting around us or they would have been annoyed by my constant requests to translate the Punjabi. Aurangzeb’s play brought tears to my eyes as Shah Jehan wailed over the head of his eldest son while the fakir taunting Aurangzeb sent chills down my spine. The only thing missing was a real or even fake human head. They just had a covered tray but hey, I’m creepy that way.

Having heard a lot of negative things about Mohsin Hamid I was surprised the discussion titled “A Vision, A Country” was enjoyable. While I question the fact that Veena Malik is his new hero, which I bemoaned and the rest of the room hooted over, it was fun to listen to the author of one of my favorite books talk about writing and the dismal state of the country. He attempted to find positivity where possible, and good-humouredly answered questions, amused at hearing that one reader initially thought Moth Smoke was “a druggie book”.

At the end of the session, I went to get my book signed by Bina Shah, and at this point, the ugliness of KLF reared its beastly head.

“Bina!” snapped a nasty looking organiser who wanted to move the table away. “Just a second!” Bina Shah shot back, giving me an exasperatedly amused look. As she attempted to write the last ‘h’ in Shah, the woman jolted the table, making the poor writer yelp in protest. “Oh, sorry,” said the cranky woman, not sounding apologetic at all.

I ended up missing Muhammad Hanif, Daniyal Mueenuddin, and Ali Sethi’s  discussion on Work In Progress, which brings me to another criticism of KLF – punctuality. The day started off with things running half an hour late and that gradually became a one hour delay. Various reasons were given on Twitter, but it still shows a bit of ineptitude towards the basic organisation of the event.

Daniyal Mueenuddin’s session on Sunday started fifteen minutes late, but once it began, the audience was hooked. Mr Mueenuddin read out an excerpt from an unpublished story, talked about novels and short stories, and discussed his upcoming novel. I managed to get my copy of In Other Rooms, Other Wonders signed despite women jostling and threatening to trample me. He ended up misspelling my name. “I think its Ghausia,” said one kind lady, trying to help.

“Oh my God! Its Daniyal Mueenuddin, he can write or say my name however he wants!” I squeaked excitedly, still trying to register that I was standing in front of him, of all people, who graciously apologised, both verbally and in writing.

Tips for next year

It must be said that if it wasn’t for the star-studded guest-list, I doubt KLF would have been this successful. Firstly, people wearing Oxford University Press (OUP) tags were mostly standing around chatting.

The organisers might also want to consider a change in venues for next year, considering that there were more people at the event than the hotel could hold. Aside from delay in timings, too many great panels were arranged at the same time, making us miss a discussion on publishing in Pakistan in favour of Sheema Kermani’s talk on literature and the performing arts. Perhaps the organisers should consider extending the event to three days. Considering what a roaring success it was despite the shoddy arrangement, people would be ecstatic at the event lasting longer.

For the love of literature

Bad experiences with the management aside the KLF was a breath of fresh air. It’s heartening to see how many people flocked to listen to and meet writers and discuss literature. I was mildly star-struck by the crowd and the fact that I saw so many writers. I saw Fasi Zaka but was too shy to get my bookmark signed; a friend even texted me saying she met George Fulton. The writers were the saving grace of the event, constantly apologising for delays and good-naturedly dealing with the staff.

We need more events like these in the city because a hotel brimming over with people proved how starved the educated literature-loving population is for such festivals.