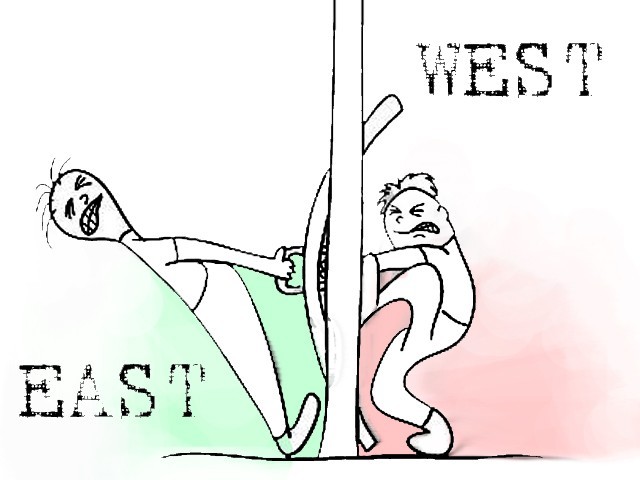 We truly are ashamed of our roots – not because of our keen interest in western wear or lifestyle, but our rigid habit of looking down upon those who prefer or can only afford the eastern lifestyle.

“You have a confused identity. Aren’t you from Paki-land? It seems like you’re ashamed of your roots… haha”

Those words used to infuriate me. I used to think to myself, “what do they know? I fluently speak my mother tongue at home!” But I guess that wasn’t enough to prove that I am a proud Pakistani.

England was home, but it had its set of challenges. I was constantly questioned on why I prefer cod and chips over chicken curry, why I prefer wearing jeans over shalwar kameez and so on. It used to aggravate me. And post 9/11 it only got worse.

The questions had now turned into a single blunt statement:

I wasn’t trying to be.

But they were right. Fast forward, I moved to Pakistan at the age of 17, and came to realise that they knew more about us than I ever did. We truly are ashamed of our roots – not because of our keen interest in western wear or lifestyle, but our rigid habit of looking down upon those who prefer or can only afford the eastern lifestyle.

That takes me to a discussion I had had with a friend of mine; she graduated a year ago and yet is struggling to find herself a job. A few weeks ago, she told me that she had been rejected from multiple places on the basis of being ‘too local’.

I was confused for a while. She has been applying for jobs ‘in Pakistan’, not in the UK or in Canada – but in Pakistan – then why on earth is being local a problem? Shouldn’t the educational system harboured in our own country be qualification enough to avail good jobs? She was a smart girl, who topped her examinations and had excellent references and recommendations from her teachers. Then why claim she is any less competent than someone who had the finances to be educated elsewhere?

Another friend spoke to me about how she was applying for a job as a hostess in an upcoming production house. She told me they made it very clear in her interview that they wanted someone from the ‘burger’ crowd. That is, people who walk and talk the western persona.

Why is our worth being measured by the level of western influence in our lives? Is this not grounds for discrimination?

Why do we, ourselves, measure our worth in the same manner?

There has been an apparent dilemma of choosing the right education system. Most of us prefer the Cambridge system over the local Matriculation system, as the former tends to have an edge over the latter. But why? All private institutions now cater to the global market, for which everyone is taught with the English language being the primary mode of instruction, and Urdu being secondary. It’s as though, from childhood, it is instilled in us that we must be more western, because therein lies our credibility and worth. Yes, we have a post-colonial complex, but it has been over six decades since we got our own country! Is that not enough time to re-establish our own roots and culture?

We may think it’s ‘cool’ and ‘highly sophisticated’ to keep the Cambridge system on  a pedestal while demeaning and rejecting others for being ‘too local’, but try disclosing this mind-set in the UK – ironically, they think we’re a joke, and wonder how we had acquired our superiority complex.

Why do we intensely rely on importing better quality products from the west, rather than creating something worthy at home?

In fact, schools in Pakistan made over 270,000 entries for Cambridge qualifications this year, an increase of seven per cent over last year. I by no means aim to discourage the foreign system; I’d be a hypocrite to do that. It’s not about which education system should be preferred – of course, the Cambridge system is superior by a clear mile. But my point is, why not implant its brighter features into our own system, rather than continue to degrade what’s ours.

Meanwhile, why not give the ‘locals’ a chance to prove themselves? If they lack the skills, train them until they meet your expectations. Why treat Matriculation as a curse? If we can afford the better system for ourselves, does that give us the license to look down upon others who can’t? Can we not bring a positive change to our own system, instead of aspiring to find a job and settle down elsewhere in the world? All our qualified and educated citizens want to leave this country and set home base somewhere else. And those that want to invest in our country are being told they’re not the right fit for the job.

We need to stop nurturing this feeling of being ashamed of ourselves and where we come from.

It’s about time we wake up, Pakistan! Don’t prove them right; let’s show them that we too can embrace our land by accepting our own people.

This Coke advertisement makes us smile over a stereotypical concern