Classroom corruption: Time for teachers to learn a lesson 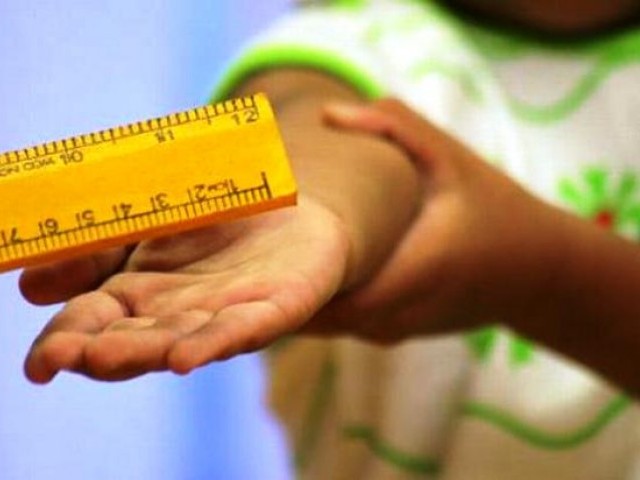 I have often heard stories about teachers beating students black and blue.

A nine-year-old girl’s face flashes in my mind. The girl was beaten black and blue by her teacher who had accused her of stealing Rs500. Some would say the girl is ‘lucky’ as she did not sustain grievous injuries unlike many other victims. But no child who face a teacher’s abuse is lucky enough to escape mental anguish it causes.

Students have been known to be punished so badly that they lose their eyesight for crimes as minor as not learning their lessons or misbehaving.

Teachers: are you reading this?

Things might be different in elitist schools for the privileged, where only qualified teachers are hired and parent-teacher meetings are frequent but public schools in Pakistan are fraught with old-fashioned teachers who religiously practice the adage ‘spare the rod and spoil the child’. The situation grows worse when parents have an irrational awe for teachers and they train children never to disobey, question or criticise them.

Most of the teachers I am referring to won’t ever read this, since, ironically, reading is the last thing on their to-do list. Once a teacher who has passed metric and a primary teaching course (PTC) joins a school he treats students like royal subjects and expects them to obey him no matter what.

You are too stupid to learn

Teachers often pick on weak student and favour the more intelligent ones. The use of words like  ‘idiot’, ‘hopeless’ and ‘retard’ hit where it hurts: a child’s self-esteem. It is not difficult to imagine the agony of a parent who is told that his child can never learn or that he is bound to fail no matter what; imagine being told that you are an absolute failure as a parent.

Teachers do not have the right to be judgmental. If punishment is necessary, this can be done in some way besides verbal abuse and beating.

In most rural areas and some urban schools, it is common practice for teachers to make children run personal errands. Even in these times, incidents of a teacher knitting in class while students work are not uncommon. I have personally witnessed a request as absurd as a teacher asking each student to bring a potato from home – not for some science project, but for her personal consumption.

A physics teacher in my first year of college was feared by students for her sarcastic and disrespectful language towards students. One day, in front of some 50 students, her 3-year-old daughter said:

“I’ll hit you so hard that you will wet your pants.”

The child had obviously heard the threat from her mother. I hoped that the our intimidating physics teacher had learnt her lesson that day.

What advertisements are doing to our children

If Donald Duck is not a threat, why is Hanuman?