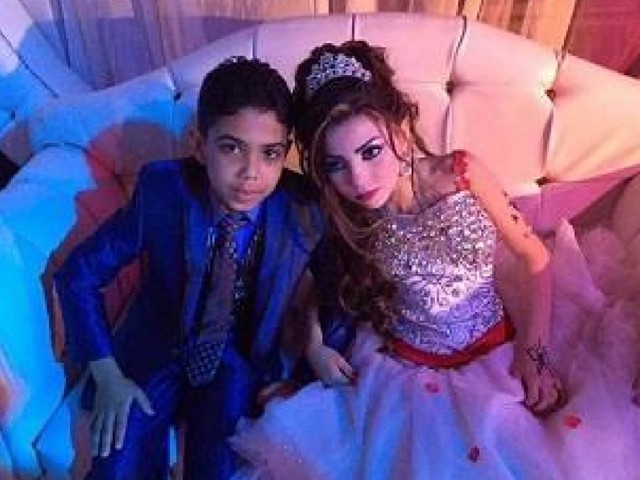 Omar and Gharam are engaged to be married. PHOTO: WASHINGTON POST

She shut the book and jumped around with blissful glee. Cinderella was her favourite character and she had gotten married too.

Mother had given her the news only yesterday. On her next birthday, she would be a bride, just like Cinderella. Cinderella’s wedding dress was white and puffy with beautiful flowers sown on it. So would be hers. Cinderella’s dainty shoes sparkled brightly. So will hers. Hundreds of people in fancy dresses attended Cinderella’s wedding. Her own wedding was to be attended by almost the entire village too. Food and drink will flow and everyone would look upon her as she will enter in her sparkling gown. Just like it happened in Cinderella!

The only difference is, Cinderella was not made a bride when she was 12. But for girls between the ages of 12 and 17 in Egypt, it is a frequented practice. Hence, the above described account depicts the true mind-set of each child bride that ties the knot in Egypt. Years have not yet touched their innocent dispositions. Their faculties are pure, their hearts bright and their sensibilities are not yet open to vulnerable exposure. In short, they are only children being tied together in marriages that are too big for their breeches. Such is the example of the 12-year-old Omar and the 11-year-old Gharam who were engaged in a lavish ceremony near Cairo.

Before questions are raised regarding the age of marriage envisaged by Islam and how puberty is put forth as a reasonable pretext for marriages, let us make a few things crystal clear. Islam has favoured early marriages in order to save the collective society from illicit relations, adultery and many such vices. But it has favoured ‘early’ marriages. Not ‘child’ marriages. Before someone starts giving examples of young marriages from different eras of Islamic history, let us also take a moment to ponder how drastically different were the ethos of those societies. Those were eras of precocious children who were capable of handling the affairs of not only their households, but of the entire state and empire that they were entrusted with.

Not only Muslim history, but European history also holds examples of rulers like Julius Caesar who was extremely young (by today’s standards) to take up the reins of the entire Roman Empire. But as man has evolved, so have his standards, his ethics and his values. While the behavioural sciences have advanced in theories on how to bring up children, they have also made our children more dependent. Technology and gadgets haven’t helped either. By spoon-feeding our children, we have raised a generation that is not mature enough to support or even survive early marriages, let alone the custom of child marriages prevalent in Egypt and other countries.

These marriages represent a culture of societal pressure and control that attempts to pre-empt and counter any decision making process on part of the bride and the groom. As even in the 21st century, ‘love’ marriages remain taboo for conservative societies, parents in such situations feel that they will encounter less resistance if they marry off their children while they are immature and impressionable. Some like Omar’s father in this case argue that,

“We have to protect them in their early years before they reach the age of deviation.”

Is it the only way to do so? No one denies the importance of raising kids according to certain moral standards. But is it wise to hand them such humongous responsibilities? Childhood being the most endearing and precious time of a person’s life, being deprived of it by marrying them and burdening them with obligations is sheer cruelty. What makes it even crueller is the fact that at this stage, due to their innocence and naivete, they do not realise what a marriage could bring at this time. Consummating their marriage and having their own children, while they are still pre-teens, becomes an ethical nightmare.

How can they be wise parents if they themselves are immature and inexperienced in life, not to mention their education is disrupted? Barbie dolls are replaced with crying infants being nursed by little girls who are physically fragile and mentally juvenile. But it would be unfair to say that only girls feel the brunt of this antiquated and brutal practice. Boys are affected adversely too. They become mentally stressed out from the responsibilities thrust upon them and the premature flair for physical intimacy drives them towards unhealthy and illicit activities.

Islam teaches us certain guidelines for conducting our affairs, but it also invites us towards Ijma and Qiyas, which are tools of intellectual cognition and derivations. Thus, there is a need for proper research regarding these matters in light of religion and circumstances to guide the normal public as to when and how marriages be conducted in an Islamic society.

By our orthodox beliefs, we have made our lives more difficult by brandishing the so-called iron fist of Islam at anyone who dares to question our practices. Child marriage is a misinterpreted and cruel practice that reeks of ignorance. It must be eradicated because every child has the right towards a robust childhood before he or she becomes burdened with the affairs of adulthood. Let your children, be children first and then parents, when the right time comes.