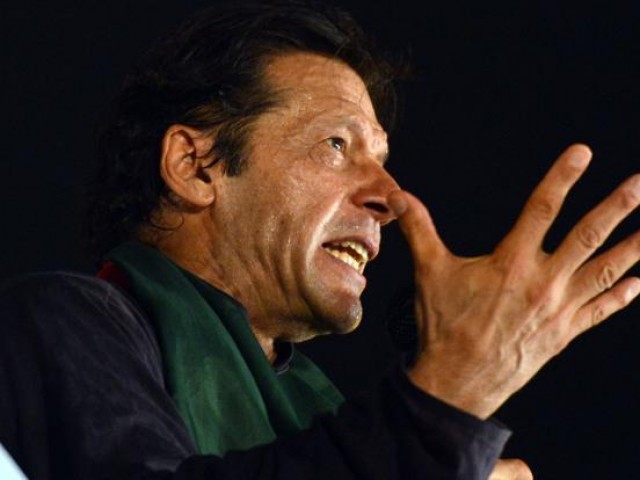 Imran Khan addresses supporters during a protest in front of the Parliament in Islamabad. PHOTO: AFP

Right then. Imran Khan and the Pakistan Tehreek-e-Insaaf (PTI), Tahirul Qadri and the Pakistan Awami Tehreek (PAT) and possibly the Lal Masjid folk as well, are scheduled to ‘lockdown’ the capital on November 2, 2016. Pakistan may be many things, but man oh man, politically boring is definitely not one of them.

So here’s the deal: some of the Prime Minister’s (PM’s) kids had offshore companies in their name linked to properties held abroad – leaked by the hacks into Mossack-Fonseca. Imran Khan (the opposition) demanded the PM step down on moral grounds, and the PM didn’t. An investigation was supposed to be launched, and eventually did, but by this point Imran Khan is so heavily invested: morally, politically and financially (those rallies cost $$) that he can’t tenably pull back even if he wanted to – which he doesn’t.

So what’s certain is that Islamabad will once more be subjected to an indefinite period of ridiculousness where containers crowd the street, tired policemen resort to relieving themselves on the roadside (because Islamabad’s streets weren’t built to house thousands of policemen) and the whole city shuts down in an atmosphere that’s best described as somewhere between that of a coup-in-action and a months long music festival: both events that weren’t designed to last longer than a day. Utterly bizarre and totally unique to Pakistan. You have to witness it to believe it – so if you’re a foreigner looking for a holiday that’s off the beaten path, now’s a pretty good time to book a ticket to Islamabad.

Should the PM have resigned following the revelation? Maybe on moral grounds, but the fact is he didn’t. And to be realistic, he wasn’t named directly. Absent proof of his wrongdoing, it didn’t make sense for him to relinquish his power. After all this isn’t Iceland. This is Pakistan, where the political party that’s leading the ‘justice movement’ is made up of politicians hailing from the same ol’ parties who they’ve accused of corruption. Plus, the PM did setup an investigation, and the case has been scheduled for hearing in the Supreme Council.

The opposition isn’t having it though: they allege that all national institutions (absent the military) are in cahoots with the Sharifs, ergo anything less than unquestioning capitulation to the PTI’s demands is unacceptable to the agitators. Not much of a negotiation really: inherent to the concept of negotiation is compromise – without compromise negotiation becomes strong-arming, which is a pretty accurate representation of what the opposition is going for. Whether the opposition would have behaved any differently if the much discussed terms of reference (ToRs) had been setup according to their preferences is an irrelevant question at this point, but given the last ditch, all or nothing, hell or high-water mindset of Imran Khan, it’s unlikely that they would have. After all – Imran likes containers. And dharnas. So do a lot of people. And let’s be honest: it’s going to be the most excitement that Islamabad will have gotten since the Diplo concert.

Now let’s consider the rights and wrongs of it: is the PTI justified in its designs? Well, as far as right to protest goes, absolutely. One of the cornerstones of a functional democracy is the right to protest. From the Vietnam war to the civils rights movement, from the Berlin Wall to Tianamen Square; some of society’s greatest evils have been brought to the limelight and subsequently corrected through protest. But is this a ‘protest’ in the widely accepted definition of the word? The undeniable truth is that this threatened ‘lockdown’ is more than just a ‘protest’, just as 2014’s ‘sit-in’ was decidedly more than just a ‘protest’.

Access to key roads, government buildings, schools and other functionaries of everyday life will be blocked for an indefinite period of time. By the PTI’s own admission, they plan on bringing the capital to a stand-still, making the government incapable of governing. By the PTI’s own admission, they plan on storming any police stations where protestors who get arrested are held. And by their own admission again, they plan on creating a situation which might beget interference from a non-elected institution. Sorry, perhaps I para-phrased. Imran Khan’s exact words were,

‘If a third-umpire is to intervene, it shall be no-one’s fault but Nawaz Sharif’s’.

That one was particularly worrying/amusing. Quite like telling your wife that if she gets cheated on, it’s no one’s fault but her own.

The last time the PTI/PAT held a dharna, their workers stormed the Pakistan State Television building, shutting down its operations and beating up its workers till the military intervened. The Chinese Premier’s visit had to be cancelled because of the chaos, leading to a Chinese reconsideration on choosing to invest so heavily in what looked like a politically unstable Pakistan (thankfully this was salvaged). So was the PTI justified in ‘locking down’ the capital like it did last time? Not in the way it did. And is the PTI justified in threatening to one-up its last performance? If it means storming more government institutions, then hell no.

The right to protest in any democratic country is, much like freedom of speech: a right that comes with certain limits. When freedom of speech leads to the incitement of violence or damage to property, it stops residing within the realm of protected right, and starts to become something that a governing authority has a responsibility to prevent. Same thing goes for protest: when a protest becomes a hostile movement that is overtly aimed at disrupting not only vital state functions, but also everyday life and movement of citizens, then it ceases to be a ‘protest’ in the pure sense of the word and becomes more of a hostile takeover in nature.

Finally there’s the matter of precedent: what if every group in Pakistan started adopting this tactic whenever it wanted to further its own agenda? Imagine a hypothetical scenario in which the government took action against Lashkar-e-Taiba (LeT), and the capital was ‘locked down’ by hordes of Jamaat-ud-Dawa (JuD) workers. Would that also be a ‘justified protest’?

But the Sharifs are corrupt you say. And the NAB, FIA, ECP and every other three-lettered acronym (save one) in Pakistan is in cahoots with them. And we’ll never get justice if we don’t support Kaptaan. This is every citizens right – no, their responsibility!

My dear die hard Insafians (of whom I know a fair share) – take off your red and green coloured goggles for once: Imran is well within his right to protest but ‘lockdown’, threats against the police, enlisting the support of jihadis and mysterious Canadian lecturers, and the deliberate creation of a situation where the military might have to step in, is not in Pakistan’s interest. Not the Sharifs interest or the PTI’s interest, but Pakistan’s interest which is in my interest and your interest.

We’re smack damn in the middle of our most heated relations with India in recent history. While they’re firing at us across the LoC, claiming farcical surgical strikes, and openly on a mission to defame and isolate us internationally, we’re in a situation in which we can’t stop the infighting long enough to look even remotely united. Modi, not two months ago, overtly admitted to funding terrorism in Balochistan. Make no mistake: India is currently on a soft-war offensive against Pakistan, partly because (to his credit) Nawaz Sharif took up the Kashmir issue on an international level. So either die-hard Insafians don’t recognise this or they simply don’t care, because if they cared then they’d also recognise the damage (and there will be damage at some level) that Imran Khan will cause by hindering the governments ability to respond to Indian aggression on a diplomatic front.

Rather than present a united political front in the face of foreign aggression, Imran Khan has repeatedly indicated through his actions that Kashmir, Pak-India tensions, and anything else that doesn’t somehow help him get him into the PM’s office is less important than his ‘movement’. Just yesterday, 62 people were killed in an attack in Quetta. Rather than put aside political differences in mourning, Imran Khan did the extraordinary: he suggested that the attack’s timing was no coincidence and there seems to be a link between the incidence of terrorist attacks and the amount of trouble the government is in. I have no words for this other than it being utterly disgusting and telling of a narcissism that borders on sociopathic.

The same applies for CPEC, which could be the biggest game-changer in Pakistan’s history. $46 billion worth of development is on the line and contingent on the deliverance of stability, security and governance that supports the projects; stability that is threatened when the largest opposition party refuses to accept the mandate of any national institution and instead pursues a route of un-parliamentary political agitation.

I can hear the drunk-on-kool-aid counter-arguments already: CPEC is secondary to accountability – corruption is a bigger threat than India/terrorism, etc, etc. These make for pretty little sound bites but they’re not really true, or grounded in reality. The threat from India is real – they’re taking visible actions to encircle and isolate Pakistan. Their funding of terrorism in Baluchistan alone is more threatening than the vague notion of ‘corruption’. As damaging to the country as corruption might be (and it’s up there on the list), it just doesn’t match up to the harmfulness of when innocents or our soldiers get killed. And like it or not, CPEC is the best lifeline Pakistan is ever going to get, so while squabbling over the allocation of projects is to be expected, threatening the overall stability of the country and, by extension, the viability of the project is irresponsible, if not anti-national.

Sadly, such arguments tend to fall on deaf ears on the PTI side. In their eyes everything is tainted and only Imran Khan can deliver the country from evil. If Imran threatens democracy, employs the help of religious extremists, causes damage to property and/or state function and sets dangerous precedents in the process, so be it, the thinking seems to go. Anything is justified in the quest for justice; such a powerful and ironic closed loop of logic.

So, what then, you ask? Should Imran Khan abandon his quest to expose alleged corruption? Certainly not. Nothing less would be expected of an opposition government. What he should abandon is the quest to catapult himself into an early election at any cost. What he should abandon is the idea of dragging the army into politics every time he descends on Islamabad in an attempt to bully his way into office. And what he (as should Khawaja Asif) should absolutely abandon is cheap, morally reprehensible tactics like using a terrorist attack as a political tool.

‘It’s not who I am underneath, but what I do that defines me’.

And Donald Trump once said,

‘.. I will totally accept the results of this great and historic presidential election … if I win.’