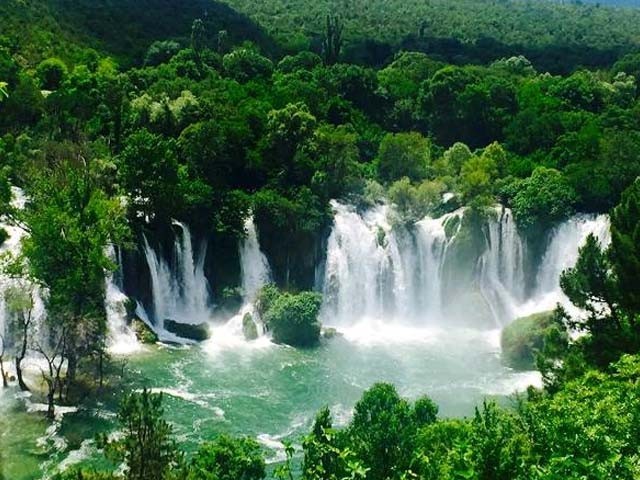 Bosnia is a beautiful country, stretched over mountains and rivers. PHOTO: QURATULAIN FATIMA

Imagine this: a Pakistani female, a backpack, and a trip across Europe. As a child, I saw the Bosnian war unfold. I played with the Bosnian refugees in the infamous Japanese park in Islamabad. I was infatuated by the country and its people, yet it always remained a sort of enigma for me.

Years later, I am back in Europe and ready to backpack through Bosnia.

The city of Mostar.

I had saved money and decided that the Balkans would be my last stop before heading home. There are no direct flights into Bosnia, so I had to land in Croatia’s overrated town Dubrovnik, whose only attraction, at least for me, was that the Game of Thrones’ King’s landing was filmed there. After bracing this highly expensive and moderately beautiful city, I embarked upon the Bosnian bound bus.

If you’re a green passport holder, and a Pakistani woman travelling alone – you will be the cause of numerous delays – our bumpy seven hour journey to the Bosnian town of Mostar was delayed as the snoozing border guards jumped at my passport and stood in awe of my “perceived defiance” of Salafi Islamic values. I found myself apologising to my fellow passengers for the delay caused by my shocking presence on the borders of the Balkans.

Bosnia is a beautiful country, stretched over mountains and rivers. One can still note the damage done by the war in the cities, villages, and towns almost 20 years after. Bosnia (part of the former Yogoslavia) used to make planes and industrial goods, yet it has now been reduced to becoming dependent upon agriculture. I was travelling during the holy month of Ramazan and had booked a hostel in east Mostar.

The town of pocitelj near Mostar.

Prior to the warm Mostar was the most ethnically integrated city of the Balkans. Today, it’s probably the most visibly divided city with Croats concentrated on the West and the Muslims on the East; each have separate post offices and telecommunication systems. The city is even divided by a stone arch bridge that was destroyed by the war and later rebuilt.

When I got off the bus, I was greeted by the hostel owner. He showed me bullet ridden houses as we walked towards the hostel. I was pleasantly surprised by his hospitality, as he insisted I open my fast with his family. I had the best iftar with dates and traditional sweets away from home. The entire family wanted to show me around and convinced me to stay another day. I was duly placed in the best room in the hostel.

Just before iftar, I wandered to the nearby mosque to catch a glimpse of the Stone bridge of Mostar. I was told the mosque is closed for visitors but the moment I said Assalamu Alaikum, three Bosnian women came up to me and asked me where I was from. I informed them I was from Pakistan. They told me they were delighted to meet me and filled me in on what sites to visit in Mostar. Upon departing, I was greeted with a ‘jeeway Pakistan’. The amount of love I was given in Mostar was so unexpected that I realised how impersonal the rest of my trip across Europe had been.

A canon was fired atop the hill to announce the breaking of the fast and it was time to relish the iconic Bosnian feast of Ćevapi (a meat kebab dish with bread that resembles naan) and some herbal tea. The area around Mostar is a treasure trove of nature. From legendary waterfalls to the dervish house in the mountains, Bosnia’s simplicity and beauty is unmatched.

My next stop was Bosnia’s capital Sarajevo. Sarajevo was under siege for three and a half years during the Bosnian-Serb war. It would have vanished from the earth if it weren’t for three things:

Firstly, the tunnel of hope which was built underground to connect to the outer world. It was the city’s only way to get food and supplies. Muslims built it with shovels, a lone water pump and infinite courage.

Secondly, the Sarajevo Jews who were able to escape before the siege, they supported and financed the only two free pharmacies in the city at the time.

Lastly, the Orthodox Christian Policemen, who fought in the first line of defence in the Bosnian Army against the professional Serb Army and salvaged the land.

Human compassion and resilience still cuts across religions. Sarajevo’s survival is one such example. Sarajevo remains a city with 117 mosques, 24 orthodox churches, 11 Christian churches, and four synagogues. Bosnia has a significant influence on Turkish culture and during Ramazan the city is hustling and bustling with people drinking Bosnian coffee (a version of Turkish coffee) and smoking pipes from iftar up until sehri.

If you look across the Bosnian land, there are cemeteries flooding with people that had once fought in the war. Sarajevo hosts a Srebrenica memorial to honour the martyrs of Srebrenica. Every single person I encountered at the cemetery was in tears, because the war will never be forgotten. The lives lost are still remembered.

I left Bosnia but I left my heart behind with its people and its land.