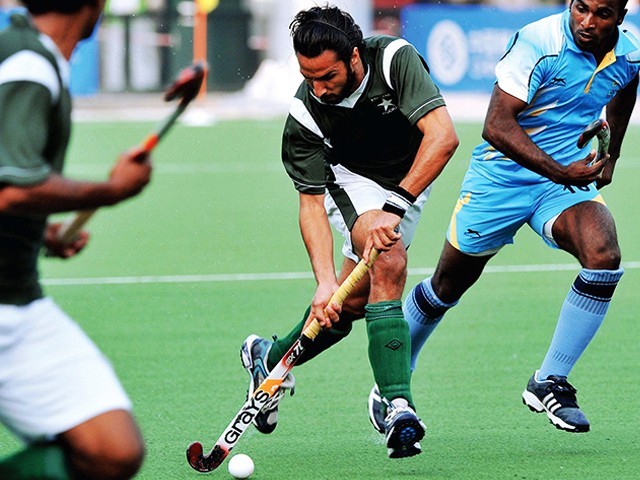 Hockey is our national game yet it’s constantly ignored by our sports channels, in fear that airing local hockey matches will not bring in enough revenue. PHOTO: AFP

What’s happening to sports in Pakistan? We, a country of nearly 195 million people, are unable to produce even one athlete that can qualify for the Olympics. The nation’s performance in sports such as hockey, squash, boxing, and many others is declining and this fall in performances is detracting the public away from these sports.

The entire nation meticulously follows cricket, and everyone wants to emulate our cricket stars. The media, particularly our electronic media, in Pakistan is completely biased towards cricket when promoting a sport.

PTV was once a lone channel able to find time to air local sports. Having said that, the turn of the century came with a boom, and a variety of new entertainment and news channels were created, along with two sports channels – PTV Sports in the national sector and Geo Super in the private sector. These channels brought a ray of hope for the general public – one that was interested in watching local sports activities. Unfortunately though, that desire remained a distant dream because even these sports channels continued to run popular content instead of promoting grass-root sports. I think it’s safe to say that their sole priority was to earn revenue, hence the promotion of sports took a backseat.

They either air old content to remind people of Pakistan’s past glory in sports or long duration talk shows, with a lack of strong content that’s unable to retain the viewer’s attention. There’s no harm in showing our country’s past success – but along with the past, we must keep an eye open for the future and take steps to help us achieve more.

Pakistan needs a revolutionary thinker like Kerry Packer from Australia’s Channel 9. Even though Channel 9 entered cricket transmission in the late 1970s (as it was a popular sport), they used their influence on Australia’s Cricket Board to change the scope of watching and playing cricket. Initially, Kerry Packer’s organised series weren’t approved by the cricket board, but his rebel league was able to attract famous cricketers of the era. Once he reconciled with the board, the entire arena of watching and playing One Day International (ODI) changed through the introduction of day/night cricket being played with a white ball, instead of the conventional red, while wearing coloured clothes.

Various sporting activities like the Shandur Polo Festival did not get adequate coverage on the existing channels. Similarly, sports activities that take place at school or college-level are not given any recognition at all! Hockey is our national game yet it’s constantly ignored by our sports channels, in fear that airing local hockey matches will not bring in enough revenue.

Globally, Pakistan is far behind in football but an interest in the game is increasing, particularly in large urban sectors. If taken to the masses living in rural Pakistan, the sport has the potential to grow rapidly in our country. Sports channels should take the risk and organise football tournaments in villages, and air them live to further attract the locals.

Pakistan has seen success in many global events, however, our progress in the sporting world is stalled due to politics interfering with selection matter, and more so, due to the constant bickering between officials. We, as a nation, fail to carry our accomplishments forward, and a prime example of this is boxing; Pakistan won a bronze medal in the 1988 Seoul Olympics but sadly, the Pakistan Boxing Federation failed to build a boxing culture after the temporal high off winning once. Today, we cannot even qualify for the Olympics’ boxing competition, forget winning.

We are a country filled with immensely talented people and are in dire need of avenues to unearth our hidden stars. Our current sports channels have the ability to find and nurture that potential, but will they take the risk required to actually indulge in sports reporting?

I hope there’s an entrepreneur out there that reads this and comes up with a sports channel aimed solely at broadcasting and promoting local sports activities. If you’re reading this Mr Entrepreneur, just know, the future of our sports industry needs you.