Nick Kyrgios and the top five… unsportsman-like gestures in tennis 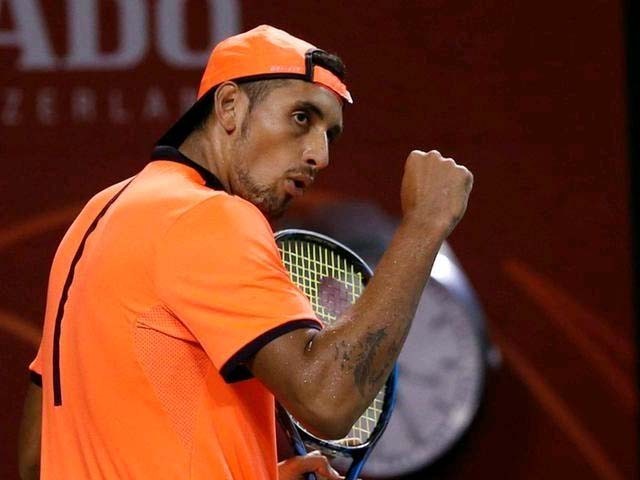 Nick Kyrgios of Australia reacts after winning a point against David Goffin of Belgium. PHOTO: REUTERS

Australian bad-boy, world number 14, Nick Kyrgios has been handed out an eight-week suspension, in addition to a hefty fine of $25,000, after he was found guilty of tanking a match and getting into an insulting verbal exchange with a spectator last week at the Shanghai Masters.

The mercurial Australian found himself making a genuine unforced error, with his erratic behaviour landing him in hot water once again with the Association of Tennis Professionals (ATP), which sanctioned him for “conduct contrary to the integrity of the game”.

The mercurial Australian found himself making a genuine unforced error, with his erratic behavior landing him in hot water once again with the Association of Tennis Professionals.
Photo: ESPN

Kyrgios put in little effort to thwart away his opponent, German-qualifier Mischa Zverev, where he patted easy serves over the net, and on one occasion started walking to his chair even before his German opponent had hit his winner. He lost the match 6-3 6-1 in supremely bizarre circumstances.

His suspension begins with immediate effect, and runs through till January 15, 2017, a day before the first Grand Slam of the year, Australian Open, which means that for the 21-year-old, Australian’s current season is effectively over. However, by committing to “a plan of care under the direction of a sports psychologist or an equivalent plan approved by the ATP”, his suspension could be cut down to three weeks.

This is not the first time Kyrgios has been accused of tanking – a term used to define a player’s deliberate attempts to lose points. In his fourth-round match, versus Richard Gasquet, at the 2015 Wimbledon Championship, Nick Kyrgios was accused for deliberately losing points by not returning serves, for which he was heavily jeered by the spectators. However, he refuted the accusations.

He found himself in the bad books of the ATP once more during the 2015 Rogers Cup, when he hurled insults at his opponent, Swiss star Stanislas Wawrinka. Kyrgios was fined $10,000 for his antics, and given a 28-day suspended sentence, which was to expire after a six-month probation period.

Even though Nick Kyrgios is the only player in recent history to be fined for tanking, he is not the only bad-boy of the otherwise gentle sport that we all love. Over the years, several notable athletes have been heavily fined for misconducts and unsportsmanlike behaviors.

Legendary American tennis star and former World number one, John McEnroe, also known as ‘SuperBrat’, had his fair share of unhealthy altercations with his opponents and was regularly fined in different tournaments for his overly-colourful language and needless arguments with match officials. In 1987, for his third-round match with Slobodan Zivojinovic at the US Open, John Mac was fined $17,500 for using expletives and arguing calls of the chair umpire. In addition to his fine, he was also suspended for two months.

In 1995, in an unlikely unsporting gesture, six-time Grand Slam winner and former World number one, Boris Becker accused his opponent, Thomas Muster, of using performance-enhancing drugs following their final at the Monte Carlo Open – a game Becker lost. Becker based his claim on the fact that it was impossible for Muster, who had complained of feeling dehydrated in his semi-final match versus Andrea Gaudenzi, to remarkably recover and win the match – having to come back from two sets down. Becker was fined $20,000 for his remarks. Andrea Gaudenzi, though, went on a 35-match winning streak, following that remarkable recovery, a streak which culminated in him winning the French Open as well.

The highly-erratic American, aptly nicknamed ‘The Tennis Menace’, was fined a record $15,500 for his unsporting behaviour and irresponsible conduct during a match at the 1995 Wimbledon tournament. Trailing by a set and a break in his third-round match versus German Alexander Mronz, Tarango told the crowd to “shut up!” following which the French chair umpire, Bruno Rebeuh, issued him a code violation on the grounds of ‘audible obscenity’.

He then asked for the chair umpire to be removed, calling him “one of the most corrupt officials in the game”, following which he was issued another code violation – for ‘unsportsmanlike conduct’. Following the issuance of his second code violation, Tarango packed up his bag and racquets, and stormed off the court, after which his wife slapped the umpire as well. Jeff Tarango was given an additional fine of $28,256, for his antics by the International Tennis Federation’s (ITF) Grand Slam Committee, and was banned from the next two Grand Slam tournaments.

David Nalbandian, was fined almost $70,000 for kicking an on-court advertising board.
Photo: Reuters

In one of the most bizarre rush-of-blood events in the game, former World number three, Argentine David Nalbandian, was fined almost $70,000 for kicking an on-court advertising board, in the final of the 2012 Aegon Championship versus Marin Cilic. Following a point loss, an angry Nalbandian viciously kicked an advertisement board that broke off its hinges and struck a line judge on the shin. The Argentine was disqualified following the chair umpire’s consultation with the injured line judge, fined almost $70,000, which included his prize money, and was docked 150 ranking points by the ATP.

She was also fined a record $82,500 for verbal abuse unsportsmanlike behavior.
Photo: Reuters

The female powerhouse, American and World number one, was on the end of an unpleasant encounter with a line judge at her 2009 US Open semi-final match with Belgian, Kim Clijsters. Serving at 15-30, Williams faulted on her first serve. However, on her second serve, the line judge called for a foot-fault, which made Williams lose her temper (and her point). She walked over to the line judge, brandishing her racquet, and threatened the line judge with an uncalled-for tirade full of expletives. A penalty point was given to Clijsters, with Williams eventually losing the match in straight sets 6-4 7-5. She was also fined a record $82,500 for verbal abuse unsportsmanlike behaviour.

It only seems apt that controversies and uncalled for unsportsmanlike behaviours are bound to exist in every sport, where athletes train day and night, to win and keep on winning. In the quest for winning and seeking glory, however, there are events where the players seem to have a rush of blood to the head when things are not going their way, as it was quite apparent with these examples. Players dedicate their lives to the sport, and when the push comes to shove, they sometimes decide to take their ‘shoving’ a little overboard. However, when tennis players make these unforced errors, they always lose points.