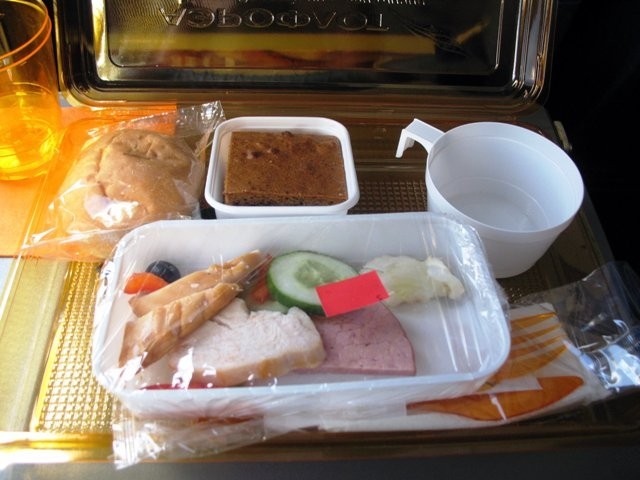 The man seated near me kept asking for cake.

Karachi-wallay like to stereotype. We spin whole life stories around accessories and behaviour. Pants above ankle length? Member of an Islamist party. Pink iPhone case with matching nails? Definitely out of town, maybe a Lahori. So it was only fitting that when I boarded the PK304 to Lahore I was assigned the seat right out of a bad airplane movie: the one directly behind the bathroom, next to the mother with the howling baby.

By that I don’t mean I’m going to start bashing PIA. Personally I like PIA, I like the spicy food and I think the schedule runs like clockwork.

Airports and airplanes only bother those people who suddenly find themselves thrust in a confined area with a host of people they usually wouldn’t meet socially. Economy, business plus and first class can’t erase the fact that flights, especially domestic ones, act like big airborne segments of society united together in seats of 3-3-3.

It was after coming to this neat conclusion that my respect for flight attendants grew immensely. That, and the incident of the cake-boy.

When the mother with the howling baby arrived with her slobbered and chewed on boarding pass, I was already seated. Halfway through the flight, the baby had fallen asleep, so she politely asked if I could keep an eye to ensure it didn’t turn and fall over while she went to the bathroom. In order for her to leave, I had to hold her food tray. I was in this precarious position, paranoidly watching a sleeping baby and balancing a food tray, when the young man in the seat one row ahead of me suddenly decided to ask:

I stared back. Did he just say he wanted my cake?

He switched to English: “I take cake?” He was pointing to the mother’s uneaten PIA dessert box.

In the next few minutes that changed to, “You have to ask the mother, she’s not here. No I’ve told you I can’t give it. Kissi soorat mein nahin, bhai saheb. NO CAN DO, BUDDY!”

The mother then reappeared, but before I could make help signals she motioned to me to wait and walked off towards the cabin, baby bottle in hand.

No! Where do you think you’re going, lady? Here I am, my entire generation’s izzat resting on the fate of a baby’s sleep pattern, and you’re off to find Tetra Pak milk? And on top of that I have to deal with cake-boy here!

Just then the flight attendant passed by. He was 6 feet 2, with a full beard and moustache and looked like he had once been in the military. I thought it was pretty gutsy of cake-boy to trill, “Excuse me, but do you have extra cake?” to him. The flight attendant stared at him, then shut his eyes and pinched his nose and walked very fast out of view before reappearing with a plastic-wrapped cake. It looked like it was taking an enormous amount of effort not to throw the dessert on his face.

And that is why I have enormous respect for flight attendants because they deal with lunatics on a regular basis.

Nothing else throughout the flight was as exciting as cake-boy so I reverted to stereotyping passengers – just as they, no doubt, were classifying me. The iPad guy on my left was listening to Arif Lohar and reading up on Slackistan on the net. Wannabe. The hoodied guy on my right was listening to, of all people, Mariah Carey. Paindoo. The balding man on my far right was reading The Express Tribune and giving me furtive, confused looks. [Yes, I know I’m its most famous columnist but no autographs please.]

I spent the last five minutes listening to French band Phoenix and pre-Cornetto Call and didn’t unplug myself from the mp3 player until I heard the musical “Khwateeno Hazraat” cue to leave. I waved goodbye to the baby, with cake-boy now complaining to the captain about PIA’s lousy service and headed towards the exit. At the bottom of the escalator a man was talking loudly on his cell phone: “No, uff it’s only the Karachi-wallay who have arrived so far…” He sounded so snobby and sneering that several passengers actually looked around, shocked and irritated. I wasn’t alone!