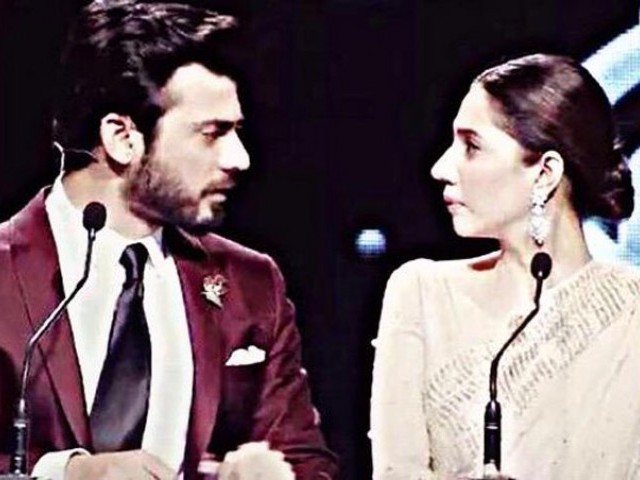 “Why didn’t they specifically mention Kashmir?” is the big question on one side of the border, while the other side is waiting for a mention of the Uri victims. Being a huge drama fan myself, I have no doubt that the minute Asher and Khirad say those words, everything will be okay. PHOTO: PUBLICITY

Thank God for Fawad Khan and Mahira Khan, their powers are unlimited! Now that they are back in Pakistan, India is safe and the Indian actors whose jobs they took or whose films (see Ajay Devgn) might have flopped because of their magical presence in side roles or extended cameos are even safer.

However, don’t underestimate the power these two extraordinary individuals possess, one tweet from them, one line on Facebook, or just a simple press release and the entire Kashmir issue would be resolved. It is just amazing how selfish they are by holding back, when a little effort on their part would fix a problem that generations of politicians, wars, blood and treasure have not been able to resolve.

After facing a barrage of hostility from a war mongering, hyper-nationalistic Indian press for the crime of being Pakistani, they are now getting a drubbing from the arm chair patriots at home. Instead of supporting our own artists, a lot of Pakistani’s are acting like extras from a surreal adaptation of Arthur Miller’s The Crucible. Just as the actors’ silence was taken as a sign of complicity, now their short, carefully worded statements are being parsed and forensically analysed for signs of treachery and opportunism.

“Why didn’t they specifically mention Kashmir?” is the big question on one side of the border, while the other side is waiting for a mention of the Uri victims. Being a huge drama fan myself, I have no doubt that the minute Asher and Khirad say those words, everything will be okay. Still, there are the cynical (and rational) who think putting pressure on their respective governments and politicians might be a better idea. To those keyboard warriors: your indignation rings hollow and hypocritical. If your empathy is reserved only for those who look like you, share the same religion as you or are on the same side of the border as you, then you have already failed the basic test of humanity.

Meanwhile, full time patriot and part time actor Shaan Shahid, is posting about how pro Pakistan he is while shooting a remake of an Indian film, Arth 2. If being “pro Pakistan” means wearing tight black T-shirts and putting fellow actors down, then he has succeeded beyond his wildest dreams. No one is asking (quite rightly) Ali Zafar, Atif Aslam, Saba Qamar, Rahat Fateh Ali Khan, Mawra Hocane, Sajal Ali and Adnan Siddiqui who have all worked (or are working) on Indian projects for their opinion on Kashmir or whether they ‘support’ ( another euphemism for ‘are you patriotic enough?’) the army. Fawad Khan and Mahira Khan should not have to face any of these questions either, both have been exemplary ambassadors for brand Pakistan and have done nothing to deserve such scrutiny.

More recently, Afzal, oops I mean Hamza Ali Abbasi weighed in on the topic with a characteristically blunt ‘either you are an Ostrich or you are not an Ostrich – pick a side’ statement. Again, being a huge Pyarey Afzal fan, I agree; moderation is for the weak , and we must all immediately take sides, in a  ‘them verses us’ scenario, because it has been so effective in the past. We’ve had three wars – I’m certain the fourth one will do the trick.

Taking a cue from Hamza Bhai’s interest in Nazi sympathisers, if we must learn something from actual history (as opposed to random Wikipedia articles), perhaps a word from the horse’s mouth might be in order:

The cherry on the cake has to be Amir Liaqat weighing in. This is a man whose greatest contribution to national security is feeding someone mangoes and giving away lawn suites. Perhaps he has forgotten that there is a difference between starring in a three minute trailer as a soldier and actually being one. But, then again, we get the patriots we deserve.

Even more disturbing is Karan Johar’s recent statement of public penance, reminiscent of a badly made hostage video; this maybe the final proof that he should stay away from any attempt at minimalist film noir and stick to opulent Punjabi weddings. His affirmations of patriotism and promises to not work with actors from the ‘neighbouring country’ are a sad climb down from his previous statement about boycotts and bans:

“But this is not a solution. I don’t believe it is. The larger forces have to come together and sort the situation, and this cannot be banning talent or art.”

If only the bullies were so easy to appease. Since this is a new era of movie star diplomacy, perhaps we should ban Ben Affleck or Leonardo di Caprio next time America inadvertently kills the wrong wedding party? In this theatre of the absurd, I fully expect all the nationalists of India to grill Vin Diesel and Tom Cruise about American foreign policy, and prove which side of the LoC they are on vis-à-vis Kashmir. Following this logic, I suppose each time China doesn’t support an Indian initiative, Jackie Chan will pay a heavy price?

Meanwhile, it’s obvious from social media that the average Indian continues to quietly watch their favourite Pakistani Dramas on YouTube while a lot of Pakistanis are waiting for the release of Ae Dil e Mushkil. Trade between the nations continues unabated and no one is putting a stop to that because some very powerful interests would lose a lot of money. So, why not pick an easy target instead? Bans on cross-cultural exchange, whether it is Indian movies or Pakistani actors only increase polarisation and isolation allowing us to dehumanise each other from a cold distance, ceding control of the discourse to certain ‘authorised’ patriots only. It is much easier to bomb, maim, and kill people we can categorise as crazy, violent and extreme than friends with whom we can share stories and jokes with.

The Kashmiri’s that are blinded by pellet guns, the Kashmiri victims of brutality, the victims of terrorism in India, and the victims of terrorism in Pakistan deserve a lot more than the revenge we are exacting by banning each other’s dramas, movies, and actors. This whole ridiculous debate is taking the focus away from the real issues and those that are really suffering. A study of history will show us that rulers like the Roman Emperors often set up irrelevant but grand spectacles to divert the attention of the masses from the real problems at hand. If I didn’t know any better I would say,

This was mom’s plan.

The author is a free lance writer, an unserious fan of dramas and films but most of all an observer . She is always looking for an amusing diversion and luckily other people are always willing to provide one. She tweets as @Tomtomatoe (twitter.com/tomtomatoe) She blogs at SadafSays.com

Should we look forward to Nasir Khan’s Bachaana?

Will ‘Mera Naam Yusuf Hai’ be better than ‘Pyare Afzal’?

10 things Pakistani and Indian drama industries need to do