The dark hope of freedom 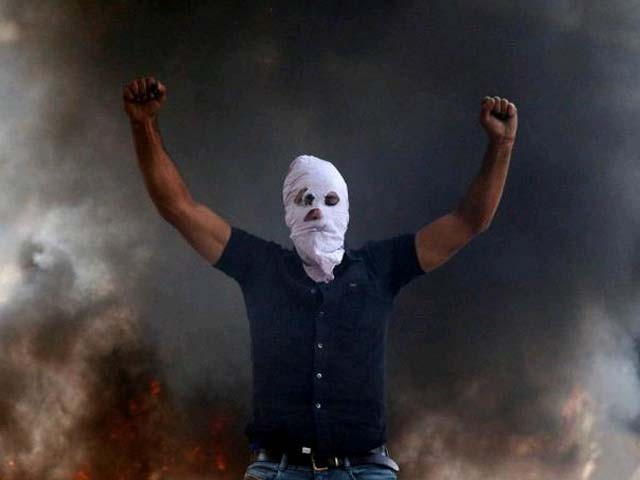 He knew it was time to fight back. PHOTO: REUTERS

They could clearly hear the sound of wailing from their neighbour’s house. Another suspected freedom fighter was dead at the hands of the Indian army. Guilty or not, it didn’t really matter and guilty of what? Ayaan thought. Of trying to free themselves from the evil tyrants?

He glanced at his mother and saw her praying. Obviously praying for the safety of her family and for peace in Kashmir. His mother was a dreamer despite the hell she had been through but Ayaan himself had given up on hopes and dreams, all he focused on was blending in with others.

He and his sister woke up early to find out that the university was closed today, due to the protest held yesterday. His sister, Aliya, had taken part in the protest despite his attempts to stop her. He was still not talking to her even though she had explained to him that it was safe and she knew what she was doing. Ayaan wanted to be as careful as possible when it came to his family’s safety and taking part in protests was not the way to do it.

After his father’s death he knew it was his job to take care of his mother and sister but Aliya never made that easy for him. She didn’t just take part in the protest, she had organised it but she was smart enough to hide this information from him. He glanced up from his book to find her looking at him with an apologetic expression but he looked away and didn’t say a word. While Aliya was in her room, his mother handed him some bread and eggs, sat down next to him and said,

“Don’t be mad at your sister.”

After a while and he replied, “she’s being stupid, she should know better.”

She smiled, “I suppose she should but still don’t get angry.” He nodded and thought about how his mother always knew what to say.

The rest of the day was pretty uneventful. The siblings tutored some of the neighbours’ kids while their mother sewed clothes and made dinner for the three of them. The next day as Aliya was feeling sick; he went to the university alone. He had a few friends he usually hung around with, but today one of his friends, Hamza, was missing. Ayaan found out he had joined the freedom fighters since the Indian soldiers had caught his younger brother spray painting, “Burhan Wani still lives in our hearts” and had beaten him mercilessly. It was a miracle he was alive. Ayaan felt bad for him but he knew that he now had to do everything to avoid him.

He spent the afternoon attending his classes and he tried to concentrate but his mind kept drifting to his friend’s brother. He thought about how easily he could have died and for what? For looking up to somebody who had dared to fight?

“Did you hear?” Ayaan glanced at Harris, another one of his friends.

“About Hamza. Can you believe it? I hear he is still going to be studying here”

Ayaan didn’t say anything and his friend kept talking. He knew that it was going to be hard to avoid Hamza but he was going to have to try. With his family history it was better to stay away from the Indian army as well as the freedom fighters. He went home to find his mother cleaning Aliya’s wound, a cut on her forehead.

“What the hell happened?” He demanded, putting his bag on the floor.

“Nothing I’m fine. It was nothing”

After a lot of insisting, he found out what he wanted to know. While Aliya was taking a student of hers home to discuss something with his parents, a soldier standing nearby started demanding that the boy go and buy him a pack of cigarettes. The boy refused and he struck him, that was when Aliya stepped in and thus the bleeding forehead. Ayaan shook his head and asked,

“Why couldn’t you just take the boy and go?”

At first she didn’t say anything but then she quietly whispered,

“Because Abba would have been disappointed.”

He said nothing after this he knew it would be useless. Nothing he could say would make Aliya realise she was making a mistake and would lead to the same argument. He sat next to his mother hoping she could give him some advice.

“Why does she do these things?” he asked, frustrated with his sisters behaviour.

“It’s in her blood,” she replied and Ayaan stood up.

“Well that blood is going to get us killed!” He said harshly and ran out of the house.

For the next few weeks, nothing out of the ordinary happened. The only thing that hadn’t changed was the hope of freedom instilled in the hearts of people. He was sitting in his class when somebody beside him sat down and spoke,

“You have been ignoring me,” Hamza stated and went on to tell him that he knew who he was and that the people he was working with were very interested in him.

Ayaan said nothing. He got up and left, all along he knew this was bound to happen.

He was walking home with Aliya when he heard the shot. He ran home to find his mother on the ground bleeding. The moment her eyes closed, he knew it was time to fight back.

The author is currently studying psychology and very interested in stories and poetry.