Can we blame the West for thinking of Muslims as they do? 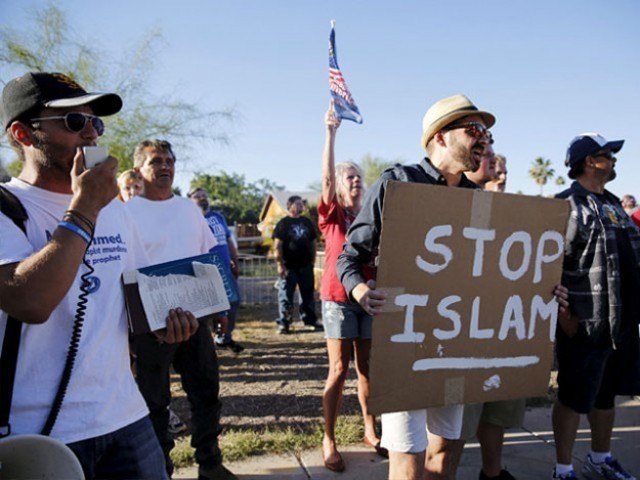 A demonstrator shouts and carries a “Stop Islam” sign during a “Freedom of Speech Rally Round II” outside the Islamic Community Center of Phoenix, Arizona on May 29, 2015. PHOTO: REUTERS

In recent times, religiously motivated terrorism incidents have taken place in the West, from Brussels to New York. Due to these barbaric acts perpetuated by extremists, ordinary Muslims are also facing excessive backlash in Europe as well as in the United States.

We, as Muslims, are correct to complain that it is unfair to bracket ordinary Muslims with the extremists, but at the same time we need to understand that our negative reputation is not merely due to organisations like ISIS but also because of our behaviour in general. I am not trying to equate extremist organisations like ISIS with normal and moderate Muslims here, but highlighting that there are issues (though of different sort) with the latter also.

We have to realise that the world is judging our religion and us, not by what is contained in the religious scripture but by the way we behave in all matters concerning religion. I am not justifying outright xenophobia and racism here, but indicating that we also share the responsibility of our bad reputation in the world due to our actions. There are problems in many areas and being defensive and in denial is not going to help us.

For example, it is true that moderate Muslims are not involved in terrorism. But at the same time, I have seen many of us either attribute terrorism to nonsensical conspiracy theories or come up with apologetic defences where terrorism is nothing but a ‘natural’ reaction. When many of us do that then we should not expect the world to consider Islam as a religion of peace, because it simply won’t. It is hard to imagine the world doing so when some of the so called ‘moderate’ Muslims fail to condemn extremist acts, give apologetic defences to terrorism or weave nonsensical conspiracy theories to shift the blame. This kind of behaviour is deeply problematic as it hinders introspection, gives the extremists soft support and allows them to thrive.

I have also witnessed some that cheer those who have killed others in the name of blasphemy. It is also true that many Muslims also support state-sanctioned harsh punishments for people accused of blasphemy as well as apostasy. In fact, several Muslim countries have harsh laws outlawing both. Often our rationale is that blasphemy is deeply offensive and apostasy is a sin, therefore State sanctioned capital punishment or even murder is justified.

Since we find blasphemy deeply offensive, we should remember that real blasphemy, with respect to our prophet Muhammad (pbuh), is caused by those who kill in his name and also by those who celebrate such killings. If blasphemy means disrespect to the name of the Prophet (pbuh) then we should use our common sense and understand that harsh punishments and violence in his name are actually maligning his name.

Likewise, many of us react violently whenever our religious ideals and symbols are satirised. What we do not realise, however, is that the West is no longer trapped in medieval times and has moved forward. It is common in their culture to criticise as well as satirise religion and they often extend the same sentiments towards their own religion as well. This is why reacting violently to cartoons is not going to be acceptable to them as they rightly perceive it as a threat to their freedom of expression.

The more we react violently, endorse violence or allow excessive reactions in such cases, the more the world will judge Islam negatively. The more we threaten free speech, the more the media will indulge in such speech in order to protect its rights and freedom.

Another huge – and perhaps one of the biggest issues – is the treatment of women. No matter what spin I give, the fact is that in most Muslim countries women are treated as second-class citizens. In the Gender Gap Index, which ranks countries with respect to gender parity, Muslim countries are right at the bottom. Out of 142 countries which were ranked in 2014, 27 Muslim countries were placed from 90 to 142 and these included so called “liberal” countries like Turkey (127) and Indonesia (97).

The assertion by Reza Aslan that in Indonesia and Turkey, women have full rights becomes laughable when subjected to empirical evaluation. There is only one Muslim country in the top 50, which is Kazakhstan and I am sure this is because of its communist legacy! And yes, my own country Pakistan ranks at a shameful 141 with only Yemen, another Islamic country, below it. Moreover, the legal code in many Muslim countries is pitted against women and supportive of the patriarchal structure. Why should we expect the world to consider Islam an equitable religion in the light of all the above facts?

Another issue is the condition of minorities. The US Commission on International Religious Freedom, in its latest report, highlighted 27 countries for particularly vicious treatment of religious minorities of which 11 are strong Muslim-majority states. If minorities living in Muslim majority countries often live in fear and if the advent of democracy in Muslim countries, like Egypt, ended up actually endangering the lives and properties of non-Muslims, then we should not expect the world to consider Islam a tolerant religion. Eventually the benchmark of tolerance is the way minorities are treated.

Now we can try to deflect the realities and find excuses and call those Muslims who point out our problems ‘sell-outs’ or ‘panderers of the West’ but will it change the situation? Eventually we have to indulge in deep and honest introspection, and understand that there is some basis behind the global negative opinion about us. Being in denial and constantly complaining about xenophobia is not going to take us anywhere. Yes, no doubt xenophobia exists, but our own actions also need correction. That is why we need to introspect.