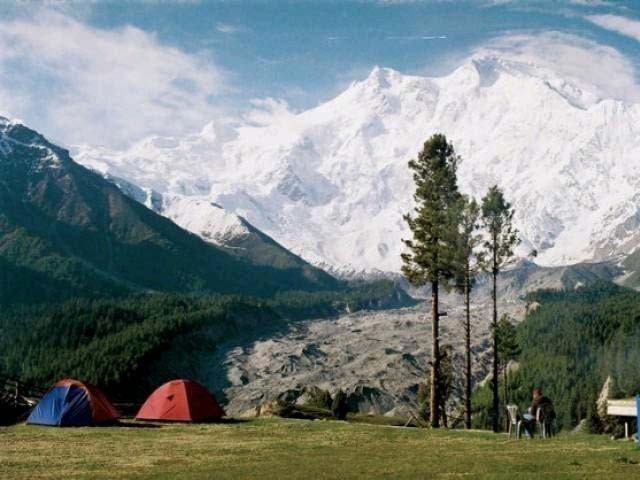 "People here respect religious freedom and we do not have to worry about being thrown into jails for professing our faith." PHOTO: TWITTER

Gilgit Baltistan is one of the most bestowed and beautiful places on our planet. And its people: equally marvellous. I had heard about the tolerance and religious harmony in Gilgit but until recently, I hadn’t seen a practical example of this coexistence that Gilgitis so often boast about. I am sharing this beautiful story for the rest of the Pakistanis, it is one we must all learn from and emulate.

In Sunni majority Pakistan, the picturesque territory of Gilgit Baltistan is the only province of Shia majority. As such, the sacred month of Muharram has a special place in the region’s annual calendar. Just days ago, during the commemoration of Ashura – revering the martyrdom of Imam Hussain (ra) – social media lit up with a feat of intra-faith collaboration and outreach in Gilgit that is unprecedented for mainland Pakistan.

The Shia student body of Gilgit, Imamia Student Organisation, joined hands with the local Ahmadi community to organise a medical camp for participants of the Ashura processions in the area. The banner at the gate of the medical camp proudly displayed the official motto of the Ahmadi community “love for all; hatred for none” in the Urdu language.

Though not uncommon in Pakistan prior to the constitutional amendment and anti-Ahmadi laws passed against the Ahmadi community, such examples of faith outreach are unprecedented in these times. Working with Ahmadis in a faith-based context is a huge taboo in Pakistan. Even government bodies refuse to engage the Ahmadis in interfaith events, claiming Ahmadis are infidels and not a “legitimate religious group”. Despite all attempts by the Ahmadi leadership to build bridges and work on common grounds, no religious group in the country is willing to publicly partner with the community on its numerous humanitarian projects.

In such a climate of ostracisation, the Imamia Student Organisation in Gilgit Baltistan deserves applause for their exemplary outreach and respect for pluralism. As things stand, I doubt a similar Shia organisation (not to speak of a Sunni group) in Punjab could show the same level of tolerance and respect for coexistence.

Intolerance and sectarianism have sadly taken deep roots across our country. And the same mind-set behind this radicalisation is also responsible for trying to destroy the peace in Gilgit Baltistan. But fortunately, the people of the region continue to resist such bigoted influence and take pride in their pluralistic ideals.

This was very evident as doctors and volunteers from both the Shia and Ahmadiyya sects helped provide free care at the medical camp set up last week. When it was time for prayer, the Shia student volunteers did not hesitate to say their prayers at the local Ahmadi worship place.

Journalist and civil rights activist, Bilal Farooqi, celebrated the intrafaith gesture and hoped for the same level of basic tolerance and coexistence in mainland Pakistan.

This is how it should be! Medical camp set up with Ahmadiyya community's help in Gilgit for Ashura processions in the area. via @KashifMD pic.twitter.com/oRpZX8u7mZ

To find out if this sentiment was the rule in the region or merely a sporadic incident, I spoke to a few members of the Shia and Ahmadi communities in Gilgit. I was thrilled to see how members from either sect were praising the other for their commitment to preserving pluralism in the region. Shia students praised the Ahmadi community for their peaceful and humanitarian outlook, while Ahmadi students lauded their Shia neighbours for having such open hearts. One Ahmadi told me,

“I cannot imagine being invited to an event at Shia or Sunni mosque in mainland Pakistan. Here, our local Shia mosque invited me to speak on Prophet Muhammad’s (pbuh) righteous character at an interfaith event recently.”

And when I asked him about the rampant sectarianism and Takfir across the country, he said,

“Oh no. We identify as Muslims in Gilgit Baltistan. People here respect religious freedom and we do not have to worry about being thrown into jails for professing our faith,” a Shia Gilgiti proudly stated, “Ahmadis are our brothers. We will not let anyone hate them. Gilgit stands for peace and love.”

Our government has often admitted that Takfir is at the root of sectarianism in Pakistan, and sectarianism the precursor of terrorism. But it has taken no steps to curb the sectarian and Takfiri language in the state’s most sacred documents. If we dream of religious harmony and peaceful coexistence in Pakistan, we must look north to our Gilgiti neighbours and try to model their attitudes here at home.

Like Gilgitis, the rest of us Pakistanis must also understand the basic principle of “agreeing to disagree” on theology, while embracing friendly community ties. And like them, we must make no exceptions to calls for interfaith and intrafaith coexistence. We must embrace all of our neighbours with open hearts. We must not emulate the Trumps of the world. We should be its Trudeaus – and it’s Gilgitis.