Talking about revolution: The domino effect 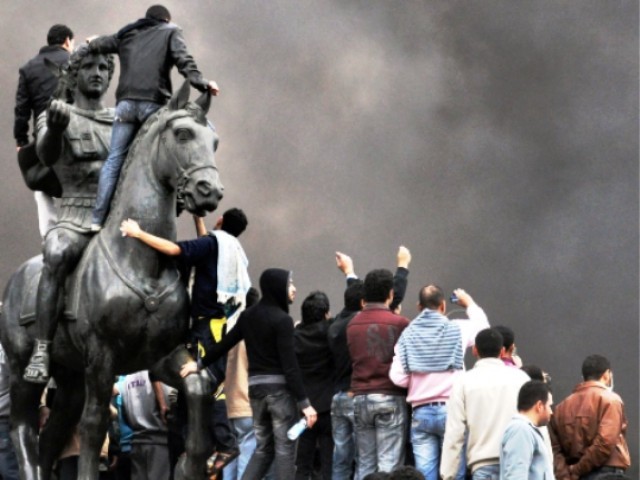 The Cairo I remember is so different from the fearless one it is today. PHOTO: AFP

Strolling down the streets of Cairo, I notice the elegant mansions lining the banks of the river Nile and the well-heeled Egyptians in cafes. But the rows of slums and crowds of animated, ragged beggars running alongside asking for “baksheesh” were hard to miss.

The yawning gap between the disempowered and the prosperous is all too evident in this bustling and colourful city.

But the Cairo I remember from a long ago visit hardly bears any resemblance to the pulsating and fearless Cairo of today. Crowds roaring back at low-flying fighter jets in an effort to intimidate; valiant protestors forcing police back as they advance, step by step; bloodied bodies amid wailing mourners; a remarkable human chain being formed around the National Museum in order to ward off attempts to loot priceless artefacts; louder and louder chants for President Hosni Mubarak to step down, for an end to corruption.

Despite Mubarak’s appointing new vice president and prime minister, as the protests swell, Egyptians have not been appeased; is it not the same as having old wine in new bottles?

Les Miserables of the Middle East

The young people marching for bread in the streets and slums of Tunisia, Egypt, Yemen, Jordan and Algiers are not fighting the terror of unemployment with ideology. They do not need one. Bleak unemployment and backbreaking corruption is the ideology for these ‘les misérables’.

The scourge decimating the Arab world is socio-economic marginalisation. North Africa and the Middle East have the highest percentage of young people in the world. 60 per cent of the regions’ people are under 30.  With the unemployment rate at 10 per cent or more, North Africa and the Middle East also have the highest regional rate of joblessness in the world. For the region’s young people, it’s four times that.

Some political scientists warn of the dark side of the “youth bulge.” A study by Population Action International asserted that 80 per cent of the world’s conflicts between 1970 and 1999 started in countries where 60 per cent of the population was under 30. Arab leaders could have harnessed the skilled, eager, and educated labour force flooding on to the market, but chose to ignore it.

Should I become a thief?

Tunisian Mohamed Bouazizi was 10 years old when he became the main provider for his family, selling fresh produce in the local market. He was 17 when he quit school to work full time so that his younger brothers and sisters could stay in school. He was used to the daily humiliating treatment meted out to him by government officials, but he snapped one morning when a policewoman who tormented him for bribes confiscated his fruit, depriving him of the 5 dinar (or $3) he hoped to make for his family that day. The policewoman slapped him when he tried to take them back.  Bouazizi fell to the ground crying,

“Should I become a thief? Should I die?”

Bouazizi pushed his empty fruit cart to the front gates of the provincial office and doused himself with one and a half liters of gasoline. Then he pulled out a match and struck it, igniting not only himself, but the frustrations of Arab youth everywhere.  Students, teachers, the unemployed and lawyers joined forces in Tunisia, braving torture and arrest, asking for freedom and employment. Boauazizi’s act of protest gave rise to a revolt that would ultimately end President Zine el Abidine Ben Ali’s 23 year rule.

Events in Tunisia may have inspired the largest street protests ever to challenge Mubarak’s three decades in power, but the anger fueling these protests is not new. The grievances are economic, social, historic and deeply personal. Egyptians, like Tunisians, often speak of their dignity, which many say has been wounded by Mubarak’s monopoly on power, his iron-fisted approach to security, and festering corruption.

Egypt has a population of 80 million, out of which 40 per cent live on less than $2 a day, or less. Ramadan Mohamed, a law graduate selling sunglasses in Cairo said:

“I have to pay 150 pounds a day to bribe police officers to let me sell on this pavement. How can I be this educated and not find proper work?”

On January 25, tens of thousands of young Egyptians took to the streets in the largest challenge to President Mubarak’s regime in a generation. People from all walks of life faced off against riot police armed with shields, batons, and seemingly endless supplies of tear gas. “Despite the tear gas and the beatings, we just kept coming, wave after wave of us. When some of us would tire, others would head in. We gave each other courage,” said one protestor.

Instead of the Arab world’s usual suspects – bearded Islamists or jaded leftists – it is young, valiant and determined people, angry at the lack of economic opportunity, who are risking their lives going up against police forces.  There is a great sense of pride that this is a leaderless movement organised by the people. This popular revolt was not organised by opposition movements, though they have now joined the protesters in Cairo. When some members of the Muslim brotherhood began chanting “Allah-o-Akbar” they were drowned out by much louder chants of “Muslim, Christian, we are all Egyptian!”

Iman Satori, an American blogger, married to an Egyptian noted:

Tunisian protesters took to the streets with “a rock in one hand, a cell phone in the other.” Since the day of the self-immolation of the street vendor that triggered riots causing the Tunisian leadership to flee the country, family members and friends used social media to share the news of what was happening in Sidi Bouzid with international media. Locals fought to get news of what was happening out, and succeeded.

“We could protest for two years here, but without videos no one would take any notice of us.”

Tunisia’s 3.6 million internet users – a third of the population- were able to follow news of the uprising on social media thanks to a solid core of activists. Tunisian protesters relied on Facebook to communicate with each other. Facebook, unlike most video sharing sites, was not included in Tunisia’s online censorship.

Facebook, Twitter, YouTube and other social networking sites have played a vital role in Egypt’s revolutionary movement too, enabling demonstrators to keep in touch and to organise rallies. Egyptian authorities have gone to the extent of blocking internet access and revoking Al Jazeera Network’s licence to broadcast from the country. Nevertheless, the social media is now a powerful weapon in the hands of people marching for reform and asking for freedom from despots.

An inspiring video showing the Egyptian peoples’ disenchantment with the regime is currently doing the rounds of the cyber world. A protestor highlights the demands of the people: “We will not be silenced, whether you’re a Christian, whether you’re a Mulsim, whether you’re an atheist, you will demand your goddamn rights, and we will have our rights, one way or the other!”

The West has for long observed a double standard in relations with most Arab countries, turning a blind eye to internal repression and stagnation, so long as the appearance of internal stability was preserved and the oil routes remained secure.

As demands for change reverberate further and further from Tunisia and Egypt, the hypocrisy separating the West’s words and deeds is tangible. Even though the US is in favour of democratic reform, it is also the primary benefactor of the Egyptian regime, which, in turn, has reliably supported American regional priorities. The first Arab nation to sign a peace treaty with Israel, Egypt is the largest recipient of US assistance, including $1.3 billion in annual military aid, after Iraq, Afghanistan, and Israel.  In other words, if the Egyptian army ever decides to shoot into a crowd of unarmed protestors, it will be shooting with hardware provided by the United States.

It would have been far easier for the West to take a negative stand if the protests had been mounted in the name of fundamentalist Islam rather than in pursuit of elementary political and economic change.

“It was deeply amusing to Egyptians that Obama – in Cairo itself, after his election – had urged Arabs to grasp freedom and democracy. These aspirations disappeared entirely when he gave his tacit if uncomfortable support to the Egyptian president. The problem is the usual one: the lines of power and the lines of morality in Washington fail to intersect when US presidents have to deal with the Middle East. Moral leadership in America ceases to exist when the Arab and Israeli worlds have to be confronted.”

Jon B Alterman, director of the Middle East program at the Washington-based Center for Strategic and International Studies, says, “Any future government of Egypt, whether it’s a continuation of the current military rule, or some sort of blend, or some sort of opposition group, is going to be less compliant with the United States than the Mubarak government has been for 30 years.”

In other words, the US is stuck between the devil and deep blue sea.

The winds of change sweeping across the region have impacted other well entrenched regimes too. China has blocked the word “Egypt” from the country’s popular Twitter-like service, while coverage of the political turmoil has been tightly restricted in state media. A search for “Egypt” on the Sina microblogging service brings up a message saying, “According to relevant laws, regulations and policies, the search results are not shown”.

Saudi King Abdullah was swift to condemn “intruders” who were “tampering with Egypt’s security and stability… in the name of freedom of expression.”

Freedom of expression and Saudi Arabia… isn’t that an oxymoron, Your Highness?

Can such a revolution take place in Pakistan? Do we also not yearn for dignity, respect and human rights? What is heartening about the Egyptian protests has been the appearance of not party flags of every hue and colour, but just one flag – the Egyptian national flag. It speaks volumes of the way people from all walks of life have united. Judges have also joined the protestors in Tahrir Square. “We are all Egyptians!” is their chant.
In Pakistan, the polarisation and lawlessness renting asunder our social fabric make it difficult for all the warring groups to unite under one banner. Is it possible for us all to be Pakistanis, and not just Punjabis, Pathans, Baloch, Sindhis and Muhajirs? Pride and nationalism in the true essence of the word, and not the frenzied bellows, hollow slogans and misguided ideology peddled by bellicose leaders bent on exploiting ethnic divides and vested interests.

“Egyptians are sick and tired of being corrupted, and when you live on 300 pounds ($51) a month, you have one of two options, you either become a beggar or a thief. The people sent a message: ‘We are not beggars and we do not want to become thieves.’ ”

Teetering on the brink of our slippery precipice, which option will we choose?