“Yahan peshaab karnay wala ghada hai”: To pee or not to pee? 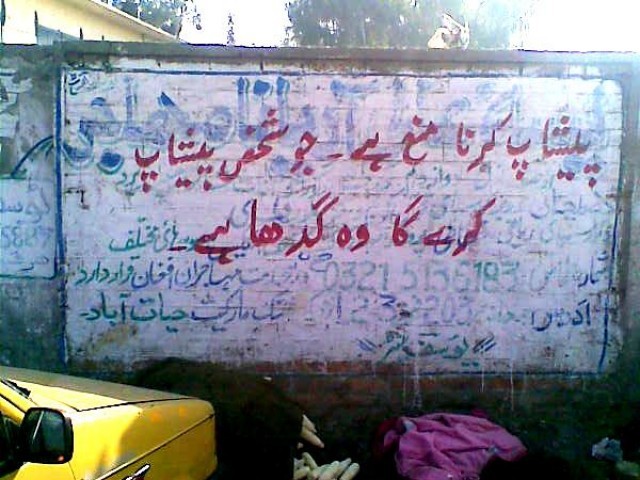 Gulshan-e-Iqbal, where almost a million Karachiites reside, has about two public washrooms – and those too are locked for some unknown reason. PHOTO: FILE

The traffic, temperature and the pressure is at its peak, with one hand on his bladder Ritesh Kumar stands between a locked public washroom and a mosque.

Karachi: Each no-go area is a safe house for another; welcome to Karachi, a city of 16 million people where public lavatories have become equally restricted for the militant, khaki or a civilian.

Whoever urinates here is a donkey.

These warnings are painted on many walls in Karachi. The only option people have is to accept the compliments written on the walls and keep on going. According to UNICEF,

Gulshan-e-Iqbal, where almost a million Karachiites reside, has about two public washrooms – and those too are locked for some unknown reason. The one near NIPA Chowrangi, an area that is considered one of the busiest and is usually backed up by traffic, has only one public washroom which, too, is locked for reasons that are unknown.

“It’s been locked for more than two years,” says Inayat Khan, who is a waiter from the nearby tea stall.

Sometimes pedestrians as well as the tea stall customers graciously defecate behind the bus stop, turning a public space into a toxic wasteland of filth.

Karachi Municipal Commissioner (KMC), the department that is responsible for sanitation in the major areas of Karachi, is not doing much. The secretary, Badar Jameel, did not know how many washrooms were located in Gulshan-e-Iqbal town and why they have been closed for two years. With the mayor of Karachi in jail, the local government is clueless about sorting out the sanitation problems of Karachi.

Syed Agha Attaullah Shah, the chairperson of Raah-i-Raast Trust, had taken up the matter of sanitation to court. He believes that the government is not solely to blame; even the judiciary is not serious. According to Shah, the private firms were ready to build public toilets but it was the local government that was not ready to give away the land. City district government Karachi has so far rented out more than 250 bus stops for opening shops as well as displaying commercial billboards.

‘‘The problem with public washrooms is that it doesn’t get you the DHA plot you aim to buy,’’ says Shah.

The founder of the trust has helped in installing at least six public washrooms in several areas of Karachi up until now.

‘‘It’s a facility that is granted to even the most barbaric killers in jail but the rightfully deserving civilians are still deprived of this space.’’

The state of a city can be judged by their washrooms. There is nothing to be expected from a metropolis where the washrooms are sealed. A magnanimous metropolitan with a whopping number of 18 towns and 178 union councils with hundreds of bus stops, cemeteries and malls and markets situated in various regions are all without clean and properly functional washrooms. The city has numerous graveyards, chowks, public parks, shopping plazas, prominent roads and general hospitals – all without the facility of a washroom.

The act of openly defecating has played a huge role in spreading diseases. Millions of children especially under five years of age suffer from diarrhoea, constipation and stunting. This highlights the issue of inequality, poverty and the lack of hygiene.

Nasha Pestonji, the manager for World Toilet Organisation, believes that Pakistan is in dire need of sanitation solutions, now more than ever, because of the growing population, lack of good infrastructure, an unsteady health care system and huge proportions of illiteracy. One has to start somewhere, unfortunately, however, our government seems to be satisfied with the public urinating on walls.

Pakistan is known to have the worst sanitary conditions in South Asia. Diseases like diarrhoea kill more people than attacks of terrorism, according to a World Health Organisation report, it was revealed that “every 24 hours, 320 children die from diarrhoea..”

The year 2003 was the golden era for Karachiites; with bridges, flyovers and signal free routes. The city was re-invented, yet nothing was done about sanitation. With a budget of Rs 408 billion the mayor made sure that people got to drive on smooth roads, but disabling both, men and women, from having access to any decent public toilets. They are left to either spray the walls of public spaces or wander about from town to town in search of malls, markets, mosques or even petrol pumps to tend to their calls of nature.

The author is a journalism student at SZABIST who likes to talk about religion and politics. He tweets as @musabghouri (twitter.com/musabghouri)