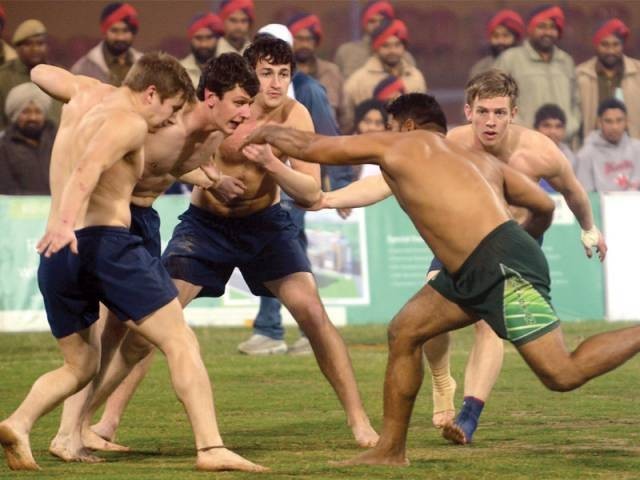 The Kabaddi World Cup will take place in Ahmedabad, India from 7th October for a fortnight. It will include teams from Australia, Iran, South Korea, India, England, Poland, Kenya, Argentina and United State of America. PHOTO: AFP

And here we go again.  Or not go, to be precise in this particular case. The Kabaddi World Cup was just a couple of days away from kickstarting and yesterday the International Kabaddi Federation (IKF) announced that Pakistan has been barred from competing in the event.

Do I need to mention the reason?

Well, for those living on Mars and completely oblivious to what is happening in their neighbouring planet, the on-going escalation in the tension between the Asian neighbours, Pakistan and India, has resulted in this unfortunate exclusion of our national team.

A major event for the sport, the World Cup will take place in Ahmedabad, India from October 7th for a fortnight. It will include teams from Australia, Iran, South Korea, India, England, Poland, Kenya, Argentina and the newbies, United State of America.

“This is not the right time to engage with Pakistan”.

The chief of IKF, Deoraj Chaturvedi, an Indian himself, said,

“Pakistan is a valuable member of the IKF but looking at the current scenario and in the best interest of both the nations, we decided that Pakistan must be refrained from the championship.”

While from across the border, Rana Mohammad Sarwar, Secretary of Pakistan Kabaddi Federation accused the rival nation of being unfair. He was suggestive that the host country itself should have been banned along with Pakistan from participating in the event, due to the rising tension and security concerns.

“We have called a meeting to discuss this issue but let me tell you that a Kabaddi World Cup is no world cup without Pakistan,” said Rana Muhammad Sarwar. “This is just like a football world cup without Brazil.”

The decision was nothing out of the blue to say the least. For the past several days, the axe was very obviously on the cards for the green trunks’ due to the existing heightened levels of cross border hostilities.

I have noticed that over the years there have been plenty of instances where sports have been held hostage by the dirty games played on the field of politics. I am a firm believer that sports and politics like water and oil cannot and should not be mixed together.

In fact, I believe sports to be very powerful. Not just full of power but supreme too.  Powerful because it brings together people from different cultures and ethnic backgrounds, religions, races and colour. And it is supreme because it has an aura of authoritative capability which promotes solidarity, harmony and tolerance amongst the competitors.

Olympics always tend to leave a profound mark on me. For almost a month every four years, I am simply in awe of how each participating country puts on a show full of discipline, equality and teamwork and most importantly, respecting other competing nations, all that under one big roof.

I am not a fervent Kabaddi follower. I don’t even remember the last time I watched it and it would be preposterously foolish of me to compare the Kabaddi World Cup with the Olympics. But surely Pakistan’s presence in the event could have only helped cool down the on-going war frenzy. All that aggression and resentment present on both sides of the border needs to come out and this catharsis would be a lot more beneficial to the people of both nations if it is vented on a sporting ground rather than a battlefield.