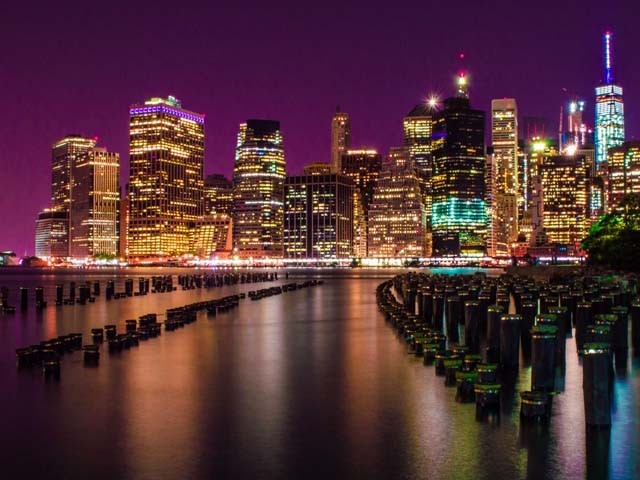 Manhattan had always been a kind of illusion. PHOTO: ANAM SAEED

I had always dreamt of living in one of the biggest cities of the world, and walking around the streets of Manhattan was one of those dreams. I wanted to feel the adrenaline rush as I walked with the high-end elites and saw their exotic taste in fashion with my own eyes. And when I got the chance to live in New York, I realised that the people in the fashion magazines and on the cover pages really do exist.

Manhattan had always been a kind of illusion – girls click-clacking in their top-shop heels, sashaying around with their Gucci bags – it had all seemed so distant. But now, this was a rampant reality. That wasn’t the most astounding part about New York; in fact, I learnt that there was a lot more hiding behind what seemed to be a shiny façade.

I came to know that there’s a lot of patience, diversity, talent, poverty, and respect in the streets of Brooklyn and Harlem. There’s a lot of courage, hard work, and perseverance that can only be seen if one goes beyond Times Square to the almost abandoned subway stations and broken houses of the Bronx. New York is a city where people lived, preached and practiced whatever they wanted to.

One day, during Ramazan, I was in front of Grand Central looking for a chair in Bryant Park to eat my iftar when I saw a man kneeling down, just like we do while offering our namaz. He was kneeling right in the middle of a construction site and a road full of people and cars. I was confused about whether I was mistaken; after all, how could one pray amidst all the dust, trash, and crowd?

Flabbergasted, I decided to take a closer look and observe him for a few seconds – and what I saw was the epitome of devotion. He was using a sheet of cardboard as his prayer mat and just praying, with no signs of anxiety or stress. All I could see on his face was serenity; he didn’t seem to care about anyone around him, nor was he concerned about the dirt and dust on his clothes, or on the piece of cardboard he prayed upon. His only concerns were his prayer, and his Lord.

The sight was beautiful and I couldn’t resist so I took his picture and waited for him to finish praying so I could ask his permission to use it later. When I told him that I took a picture of him and needed his permission, he smiled, nodded and went back to his work site without any questioning whatsoever.

While we care so much about little things like a proper mosque, a prayer mat, a clean floor, these men, despite working under strenuous conditions, follow their religion effortlessly. Isn’t this the simplicity that Islam truly stands for?

How could he pray amidst all this dust, trash, and such a vast crowd?

He didn’t seem to care about anyone around him.

Another exciting thing I encountered was how much effort people put into polishing and displaying their talents. Music, gymnastics, singing, dancing – in fact, all forms of art could be witnessed everywhere. From subway stations to nooks and corners of every street, there was a lot to relish and, that too, without spending a single penny!

All forms of arts could be witnessed everywhere.

From subway stations to nooks and corners of every street, there was a lot to relish and that too without even spending a penny!

Beyond the layers of superficiality and materialism, I saw rivulets of emotion as well. I witnessed love, empathy, despair, and thoughtfulness amidst the bustling city. Peeling off the lights of the city uncovered many feelings; let it be those simple padlocks with prayers of eternal love on the Brooklyn bridge, homeless and helpless individuals on the sides of the streets or even people sitting at a cathedral for hours.

Whenever I saw those padlocks, it reminded me of how important love is; whether you’re rich or poor, love is one necessity for everyone, everywhere. Whenever I encountered a homeless individual, I expressed gratitude to my Allah for every little blessing I had. I offered my namaz at the cathedral numerous times, as the devoted individuals there inspired me.

I offered my namaz at the cathedral numerous times.

There’s a lot more to say about the city.

There’s a lot more to say about the city and there’s a lot more to explore as well. People will tell you that there are a million things which make New York City the city where everyone wants to be. But apart from all those things, this city has a spirit which cannot be articulated. It has a form of simplicity which can only be explored and felt.