What can we expect from the Pakistan vs West Indies ODI series? 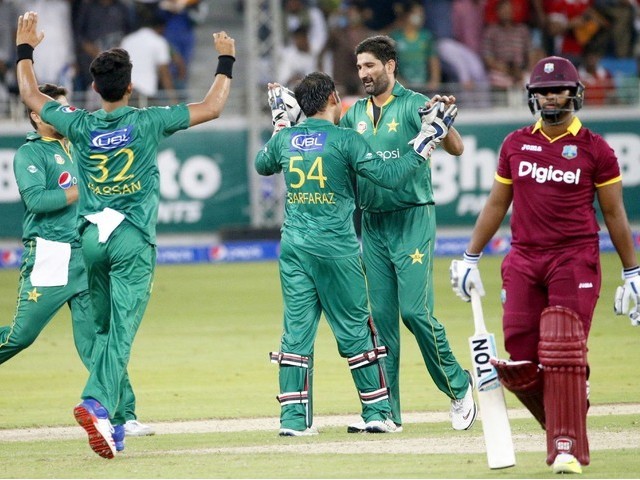 This year has been quite an unlucky year for the Pakistan ODI team. There have only been a couple of times in the last eight ODIs that the Pakistan team has left the stadium celebrating.

Pakistan has won eight out of 15 T20 matches and two out of four Tests played this year. This in turn has made Azhar Ali look like that child in the family who everyone is always scolding and pushing to learn from his friends (Sarfraz Ahmed and Misbahul Haq), who are doing exceptionally well.

Pakistan drew the Test series against England after winning the 4th Test at the Oval by 10 wickets. Photo: AFP

Even though Misbah did make a statement a few days back saying that it was wrong to blame only the captain for the team’s defeat, it did not ease Azhar’s pressure. After all, captains do bask in the glory of their team performing well. Sarfraz and Misbah are examples of when captains are given credit for the team doing well.

Even though Misbah did make a statement a few days back saying that it was wrong to blame only the captain for the team’s defeat, it did not ease Azhar’s pressure. Photo: AFP

After their poor performance in the last ODI series against England, Pakistan is facing a potential oust from the next ODI World Cup. This is a crucial situation for our team, and while Azhar Ali has miraculously been able to retain his captaincy and his place on the team, he needs to take desperate measures to bring about a much needed improvement to the team’s performance in the 50 over format.

After their poor performance in the last ODI series against England, Pakistan are facing a potential oust from the next ODI World Cup. Photo: AFP

I have never been a fan of the concept of having three different captains for the three different formats of the game. I feel this somehow impacts the team mentally since they have to keep switching to whom they consider a leader.

The fact that different teams have been selected for all three formats of the game is another problem altogether. Especially when selection for one particular format is decided based on the domestic performance of a player in an entirely different format.

Asad Shafiq is a recent example of this.

What was hilarious though was that Asad made it to the ODI squad for the series against West Indies based on his performance in the recently concluded National T20 Cup. What’s more hysterical is that the Karachi Whites’ batsman wasn’t picked for the T20 series.

Coming back to Pakistan’s ODI woes, the series against West Indies should be taken as an ideal opportunity to get back into the nick. Not that West Indies will prove to be easy opponents, it’s currently a rank higher than Pakistan.

The T20 whitewash should definitely be a confidence booster for our team. This, along with memories of the last ODI against England will definitely act as motivating factors.

Pakistani players celebrate the dismissal of a West Indies batsman during the second T20 match on Saturday. Photo: AFP

On the other hand, West Indies will also be eager to bag a series win in order to further strengthen their position in the starting line-up of the teams playing for the 2019 World Cup. Even though their ODI record in 2016 has been slightly better than Pakistan, it is still something that the West Indian Cricket Board would want to improve upon. West Indies has played 10 ODI matches in the last 12 months, out of which they secured only three wins.

These facts paint a bleak picture for the former two time world champions.

The competition between West Indies and Pakistan has always been exciting to watch, primarily because of the inconsistent and unpredictable nature of both sides.

The competition between West Indies and Pakistan has always been exciting to watch, primarily because of the inconsistent and unpredictable nature of both sides. Photo: AFP

This ODI series (it starts today) will be no exception. The only difference is that this time, both teams are fighting a battle of survival. Upcoming talents such as Imad Wasim and Carlos Brathwaite are expected to shine, but to sum it up quite frankly; it’s not Richie Richardson versus Imran Khan – it’s just Jason Holder versus Azhar Ali.