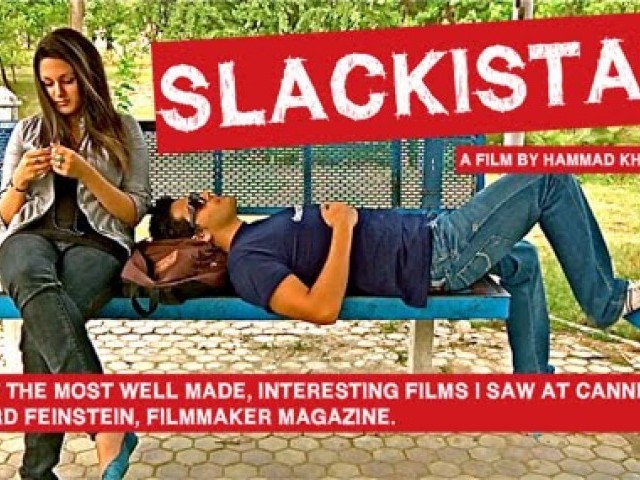 The film follows a young group of friends in Islamabad

The Pakistani creative and entertainment industry is in the line of fire yet again. Last week’s cause célèbre is incidental heroine Veena Malik, the Lollywood actress whose participation in the Indian reality television show Bigg Boss, has touched a raw nerve with Pakistan’s self-appointed morality brigade (media and mullah alike). She emerged from Kamran Shahid’s show Frontline as an ambassador for showbiz and entertainment.

This week, we have been greeted with the news that Hammad Khan’s feature film Slackistan with an all-Pakistani cast will not be released in Pakistan because of the raft of objections and censorship demands from the Pakistani Central Board of Film Censors. In all fairness if the director were to comply with the demands of the Central Board of Film Censors there would be nothing left of it.

I watched Slackistan when it premièred in London in early October 2010 as part of the Raindance Film Festival in London. By this time, Slackistan had been in the media spotlight for almost a year. The Guardian wrote:

“Indeed, the strap line for the film is: ‘Think you know Pakistan. Think again’. While it sounds like it ought to be part of a tourist campaign, it points to a country that is rarely explored in modern cinema, TV or literature.”

The BBC Asian Network (Radio) said that Slackistan has a cult following online. With all this hype it was impossible not to go and see the film.

What the film is about

Drawing his inspiration from American director and producer Richard Linklater’s 1991 debut Slacker, Slackistan is about the universality of growing up and defining oneself. In it Khan’s characters go from being ‘stuck in the waiting room of life’ to becoming (or in some cases remaining) slackers. But the film’s real creative potential lies in capturing the socioeconomic and political circumstances of the city of Islamabad.

This is done through dialogue and location. In their conversations, the characters reveal their fascination with the ‘McDonalds’ culture: brands and symbolisms. They love burgers, western fashion, branded material, dancing, drinking and partying. But equally the film demonstrates the paradoxes with which the characters coexist, such as the easy mistrust between the have and have-nots or a visit to the French colony, which brings relief as to how the city is compartmentalised so that its elite can have their essential home-help, gardening and cleaning services living nearby. Then there is the omnipresent threat of religious extremism and terrorism, which the characters in the film laugh and joke about because perhaps that is the only way to come to terms with the uncertainty of violence that has become a salient feature of Pakistani life.

Why it cannot be censored

If the director were to do away with all references to the Taliban, Osama bin Laden and any inferences to beards and religious attire, edit out any bad language, references to sexual orientation or remove the partying and the alcohol (as the censor board would prefer), the soul of the film would be lost along with a creative representation of the lives of our young slacker elite. Even if the director complied, Slackistan would be subject to an 18+ classification, virtually excluding its younger audience.

Hammad Khan is right to point out that:

“Apart from being an undemocratic restriction on the filmmaker’s right of expression, the verdict shows the disdain with which the authorities regard local film culture and liberal ideas, in the face of growing extremism and intolerance. The censor board’s verdict is oppressive, arbitrary and steeped in denial about life outside their government offices. Maybe the establishment’s view is that young Pakistanis saying words like ‘Taliban’ and ‘lesbian’ represent a more potent threat than the bullets and bombs that are, day by day, finding increasing legitimacy in the country.”

Pakistan’s got talent – you just can’t see it

This is not the first time the Central Board of Film Censors has failed to support local talent and film. Last year, Tere Bin Laden fell foul because it was said to contain objectionable content that could spark controversy. I watched the film when I was in Islamabad in December and found it not just refreshing but an almost satirical comedy. It made me laugh much but also touched upon how terrorism and stereotypes have come to affect us today.

Thwarting the release of Slackistan is not merely about holding back entertainment, it is about the lack of pride in local talent which has gone on to enjoy the international spotlight. It impedes the young musicians who worked on its soundtrack and negates a fair representation of the diversity within Pakistan. We often accuse those who constrict creative expression and diversity of belonging to the extremist or intolerant camp. Personally, I think it is about fear. It is about being afraid of challenging what is perceived to be the voice of the majority. What made Veena Malik an incidental heroine is that as a solo voice. She stood her ground as a professional actress and entertainer. The almost frenzied posting of status updates and articles celebrating her are a testament to her courage.

Offended by art but not by brutality

The need for balanced regulation has never been greater. Its principles must be responsibly defined, guarding freedom of speech as well as ethical boundaries. Our television media today stands only for graphic visualisation of violence, rash news reporting, hate mongering. Why not impose the same standards of governance there? Why will not our censorship boards object to third-rate journalism that falls so far foul of humanity? A universal understanding of ethics should be the benchmark in censorship. There is nothing in Slackistan or Tere bin Laden that is offensive. Slackistan is a very real caricature of a part of Pakistan’s population, albeit elitist, while Tere bin Laden attempts to take a light-hearted view at an otherwise serious issue. Both films are creative, fictional and good illustrations of how the film industry in Pakistan is maturing. We ought to credit them with their artistic due or forever be banished in Zia’s Pakistan.