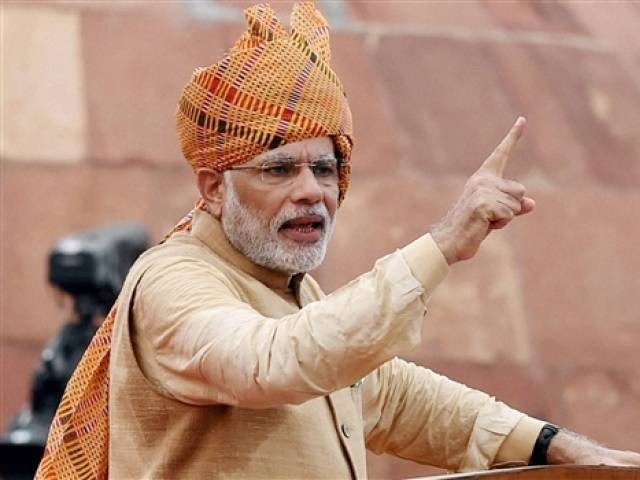 The larger media is more concerned about protecting Modi rather than the hapless victims of Kashmir and the country. PHOTO: AFP

It’s not a good sign for democracy when the government and media start speaking the same language and begin complimenting each other. The media has never been as compromised and irresponsible as it is today. It has forgotten its role as a fifth pillar of democracy, which plays a pivotal role in nation building. Today, the larger media in India is a polarised institution, accentuating the existing social and religious fault lines rather than cementing it.

The larger blame falls on televised media. In its desperate attempts to attract attention and increase ratings, the media literally plays to the gallery appealing to the baser sense of masses. No doubt the result is the mass hysteria. Prime time shows in the evening have become a sheer demonstration of hysteria and war mongering.

At a time when we bare witness to the consequences of the everlasting war in the Middle East, instead of advocating restraint and enlightening the masses, the media has unleashed a war mania in the subcontinent. It has used a very crude nationalistic tone, thereby, aligning itself with the Hindu right wing ruling party, which has been trying to polarise the whole nation under the banner of nationalism.

It suits Narendra Modi’s Bharatiya Janata Party (BJP) to keep the political pot boiling on the Pakistan issue. The media should not shy away from questioning the government’s methods and tactics in dealing with its neighbour and the larger issue of Kashmir.

It is a very disturbing time for the sane minded – especially for peace loving citizens. The problem is that a large section of the media has become the voice of the government, which is divisive, paranoid and rationally challenged.

The media had embedded the present regime much before BJP came to power in Delhi. Ever since Modi became the prime ministerial candidate for the right wing party in 2013, the corporate media embedded itself with the BJP bandwagon. It played a great role in promoting a man who had been shunned as a political pariah for a long time because of the role he played in the Gujarat riots of 2002. The media drove to make the masses accept this great divisive figure. The corporate world, which owns a majority of the media houses across the nation, invested their capital and politics into Modi’s campaign and presented him as a panacea to all economic and political problems the country faced.

Two and a half years into power, the BJP leader is struggling to honour the tall promises he made. The falling graph of Modi is not acceptable to his corporate patrons or the media houses that vehemently campaigned for him.

Therefore, to keep the myth of Modi alive, all kinds of false and hysterical reporting is taking place. To justify the maximalist position that the BJP government has taken after the Uri attack, the media is concocting different narratives to sustain Modi’s image as a strong man.

According to an article on Quint, Exclusive: Uri Avenged As Spl Forces Cross LoC, Kill 20 Terrorists, the Indian troops crossed the border and destroyed a terrorist camp. The story has been denied by the army and the government. This whole attempt is to establish that the Hindu right wing government is decisive and prompt in taking action, unlike its predecessor, Dr Manmohan Singh.

Some news channels are running uncorroborated stories that the prime minister held a meeting in the war room and discussed all the possibilities with the military chiefs. The hyperactive social media cells are also busy in circulating fabricated stories on WhatsApp and other networks about Modi’s bravery.

If you watch Times Now, Zee News, News X, ABP news – you will encounter a situation where the anchors are deliberately indulging in provocation and incitement, as well as prodding the government to attack Pakistan. They clearly lack reason and a sense of responsibility towards the audience.

One can understand such one sided, polarised debate being conducted on a channel that is run by the BJP – but such mindless jingoism being played by the liberal media tends to be quite disturbing.

They have been trying to create a situation in the country where any kind of question regarding the government is termed as anti-national. TV debates are radicalising the masses and pushing them to think in one dimension.

“Who is putting out such big claims in the media, which no officials are willing to back? What is such disinformation campaign achieving?”

He further argues that there is a deliberate attempt by Modi’s supporters to keep the myth of Modi alive.

If the media is trying to save Modi, it is harming the larger cause of democracy in India. The one sided story that the media is presenting is not able to hide the grave human rights violation that is taking place in Kashmir.

How does India benefit from raising the issue of Balochistan? How is it relevant for peace in Kashmir? Can Pakistan’s atrocities in Balochistan compensate India’s repression in Kashmir?

Instead of questioning the Delhi regime about its failure in the Kashmir valley, the media is now preoccupied with the asylum being granted to Baloch leaders in India. The media is supposed to be a mouth for the voiceless people, but unfortunately it’s now in collusion with the government in suppressing the voice of dissent in the valley.

People like us feel suffocated in this kind of atmosphere. We cannot argue or question the State’s decisions without being labelled as anti-national.

In this country, the larger media is more concerned about protecting Modi rather than the hapless victims of Kashmir and the country. This is undoubtedly a very alarming situation.

Recently, we are witnessing mindless jingoism that is being used by some radical Hindu groups as they’re harassing Pakistani artists. They have given the artists an ultimatum to leave India or else they will take matters in their own hands.

Can media escape the blame for inciting people to adopt the majoritarian mannerism?

In our zeal to teach Pakistan a lesson, we are turning inward, paranoid and fanatic – not a good sign for a liberal democracy or a country that aspires for a preeminent position in the world.

The collusion between the media and the right wing Hindu government is turning the nation into a breeding ground for radicalism. The so called liberal media only promotes irrational voices for the masses to endure. This is the tragedy of new India and its democracy – many reporters speak the language of fanatic right wing supporters.

On the other hand, there is hardly any debate on the matter of isolating Pakistan on the international front.

Can it be achieved?

If yes, then is it feasible to create tension in South Asia – where the majority still live below the poverty line on both sides of the border?

We’re all aware that India has been surviving in its diversity – which is its leitmotif as a nation. And now there are forces that are hell bent on destroying this heritage. They want to convert pluralism into majoritarianism, with the media now hand in glove with such regressive forces.

India is under siege today; not by external forces, but by internal agents who are against the idea of India.