What if Brangelina were a Pakistani couple? 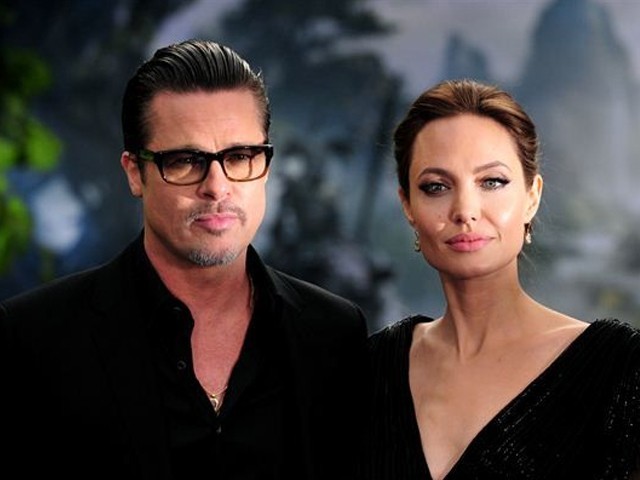 Brad Pitt and Angelina Jolie posed for photographers at the premiere of the film "Maleficent" in London. PHOTO: AFP

Just heard the horrendous news that you two have decided to split up. I would really like to sympathise with you but got tied up with pulling in all my winning bets that your marriage wouldn’t last even this long.

Hate to say it, but it would have been better if you two hadn’t gotten married at all. I mean, you lasted longer without marriage and while rounding up six kids. So really can’t figure out why you had to take the hassle of getting married in the first place.

Don’t take this personally, but the western society at large seems to have an obsession to get divorced if they are married. So the best way to avoid this compulsive behaviour is not to get married in the first place, as demonstrated by your example. Since everyone is jumping on the melodramatic bandwagon provided by the news of your splitting up, there was hardly any reason why I shouldn’t be putting in my two cents either.

I would be a hypocrite if I didn’t admit that even the people in my own country are catching up to the trend. Since they have the tendency to follow all the trends of the west, they haven’t left the relationship department unaltered either. Regretfully, dating is now as widespread here as polio used to be. So is the rebellion of girls and boys against the desires of the family to get married to whomever they wish.

However, even after all this fuss and feathers and hullaballoo, the result in 80% of the cases in Pakistan is a divorce. Yes, it is a sad situation but we have gotten, as with other negative trends, quite comfortably inured to it.

Angelina, I understand that you and Brad are asking to be left alone through this ‘challenging’ time, but let me assure you, that will not happen. So I wouldn’t count on it if I were you. Thanks to tens of outlets on social media, the human mind today thrives on sensationalism. Whether it is Facebook, Instagram, Twitter, or what-not, everyone’s mind is ravenous for an instant new ‘bang’ for the senses every few seconds.

Um. Is it too late for us to pray for #Brangelina?

Is anyone else still upset over the #Brangelina split?

Y'all Madame Tussauds have split up their #Brangelina waxworks :( pic.twitter.com/I3v3uMHoRD

Your divorce news is not only an instant bang but one that promises to linger far longer than other sensational bangs of the day. Thanks to Mark Zuckerberg, the human of the 21st century feeds off the lives of those around it and, considering by the media hype, your divorce seems to be the greatest news since man stepped on moon.

The only thing that saddens me in your case is the six children. Seriously, what were you thinking? Either you shouldn’t have adopted and produced your crew or you shouldn’t have split up. The problem seems to have started, as in all marriages, when you got married. Now imagine the media circus that those children will be subjected to. Can’t say the couples considering divorce in my country are sensitive to their progeny in the equation either. The 21st century is all about ‘me.’ It is a rare couple in today’s world that even gives a horse’s behind to ‘them.’

However, I must say you are lucky you are not in Pakistan because here your divorce would be instantly pinned on you and Brad would be cited the absolute victim of a sinister ‘aamil’ or ‘kala jadoo’ (black magic) commissioned by Jennifer Aniston to get her revenge. You would also be accused of being a horrible mother who is so tied up with her own happiness that she doesn’t care a fig about the well-being of her six children.

For if you did, you would have put up with whatever Brad shovelled out.

In all probability after the divorce, you would be ostracised from your family and given the cold shoulder by most of your friends too. Married friends suddenly get very insecure about maintaining friendships with divorced or unmarried friends. Yes, Pakistan may have come a long way but in a lot of cases such as divorce, the mind-set of the society is as primitive as outdoor toilets.

Also, if you were in Pakistan, there would be no way you could even imagine getting married again. Not with six kids. Even the 60-year-old man in our country looks for a 25-year-old when seeking a first, second, third, or fourth wife. So in a way you are least lucky to be in the US.

However, there is one thing I fail to understand. How can a person whose net worth is over $308 million, who own properties around the world, is amongst the highest banked actresses in the world, and who probably already has a line of suitors outsider her door be miserable in any sense of the word?

Come on yaar, quit stringing us along. For once, admit that divorces and marriages are just as ordinary and as much a part of your routine as breakfast and lunch. You public figures actually enjoy the public feeding frenzy that occurs at such news and bask in the light of the fallouts. I am being very honest and whoever calls me a heartless person on the aforementioned analysis would be the greatest hypocrite of all.

I wish you both all the best for your future.