On Dostoevsky’s Crime and Punishment 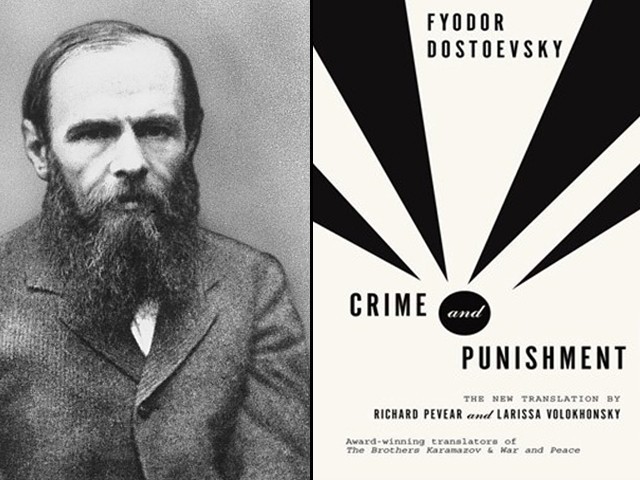 There is this turbulent mind of a suffering soul, captured so thoughtfully, and at moments, ecstatically by Dostoyevsky, that caught my attention instantly.

“My dear sir,” he began almost solemnly, “Poverty is no vice – that is the truth. I know that drunkenness is also no virtue, and that is even more so. But destitution, my dear sir, destitution is a vice, sir. In poverty you may still preserve the nobility of your inborn feelings, but in destitution no one ever does.”

This turned out to be my second attempt at reading Crime and Punishment; the first attempt was brought to a sudden halt by a slight turn of events. As a result, this wreaked havoc on my vintage copy of Crime and Punishment – the one translated by Richard Pevear and Larissa Volokhonsky – and I, being a restless soul, ventured into other pursuits, thereby forgetting about it for a while.

But the towering figurehead of Dostoevsky, and the morbid sensations captured so ecstatically by Dostoevsky in Raskolnikov — I had managed to read the first part of the novel before that occurred – kept calling me to it. I came back to it after a period of three long years, but in that time span I had managed to read Turgenev, Gogol, and Chekhov, and naturally, my mind kept drawing comparisons to the other three giants of Russian literature.

Needless to say I had read Lolita by Nabokov; I was for a while enamoured with the lyrical prose, but soon enough I grew exasperated with the whole ordeal, and I saw his novel, as a beautiful maiden flushed scarlet, but carved not out of clay but of marble, empty of soul, barren of warmth, hence the two stars. Nabokov’s critique of Dostoevsky as a mediocre novelist in his lectures came as a surprise to me years ago, and I detested Nabokov for that; to me, back then, Dostoevsky was insurmountable. Has that perception changed now? You might find out about that later on. Or perhaps not!

There is this turbulent mind of a suffering soul, captured so thoughtfully, and at moments, ecstatically by Dostoevsky, that caught my attention instantly. There is this sheer, or shall I say lingering suffering that is the running theme of the novel; there is always this agony with traces of madness and despair that hovers over you throughout your perusal of this work. However, there are times when the ravings of a monomaniac seem a tad too monotonous. Nevertheless, it does manage to sweep you off your feet with its distinct flashes of madness.

I see a passionate, frenzied Dostoevsky, hard at work, dissecting a delirious, suffering mind, delving deeper into the abyss of the soul where there reigns treachery and debasement, vileness and perversion, vanity and spite, and perhaps, infinite blackness – but here on this charred, cracked ground, there are little wild brooms straining to sprout from this sheer blackness.

“But tell me, finally,” he spoke almost in a frenzy, “how such shame and baseness can be combined in you beside other opposite and holy feelings? It would be more just, a thousand times more just and reasonable, to jump headfirst into the water and end it at once!”

There is perhaps only one thing that would ease the suffering of a righteous conscience after a heinous deed, oh those pangs of guilt, damn that persistent, unrelenting fiend of a conscience (I use not crime on purpose because what might seem crime to you might not deem punishable and ignoble to the other) is compassion, and, perhaps, repentance.

Because what is once done cannot be undone; you cannot undo the deed, but it is only through compassion that you ease the suffering of your soul, hence Raskolnikov’s fascination and magnanimity with Katerina Ivanovna, and his love for Sonya; and it is here, this stark contrast of emotions, which play so harmoniously against each other in Raskolnikov, and set his soul ablaze.

My one gripe with this work is that perhaps it was a tad too melodramatic for my taste; it appeared to me that Dostoevsky was probably hell bent on extracting the last ounce of pathos from each one of his eccentric cast of characters (I see you, Nabokov, smirking and nodding your head in approval). My other gripe was that he dragged the plot, and Raskolnikov’s salvation, which finally did arrive at the very end, seemed, well, abrupt and unnatural to me.

Towards the end, I even fancied I was watching a Bollywood flick where the ‘hero’ is brought to redemption by the devotion and piety of a woman who he has so loathed all the while, but her love finally breaks him down, and voilà, the brute manages to comprehend his own perversion, and is drawn to everything holy and upright. But then again, I guess I am being spiteful – Raskolnikov, my friend, I am afraid your vanity and spite has permeated my soul. However, I am eagerly looking forward to reading Notes from Underground and The Brothers Karamazov, and I have a hunch these would make me fall in love with the genius that Dostoevsky was.

“I did not bow down to you, I bowed down to all the suffering of humanity.”

The author is an aspiring auditor and an avid reader with a penchant for international relations. A history buff of sorts.