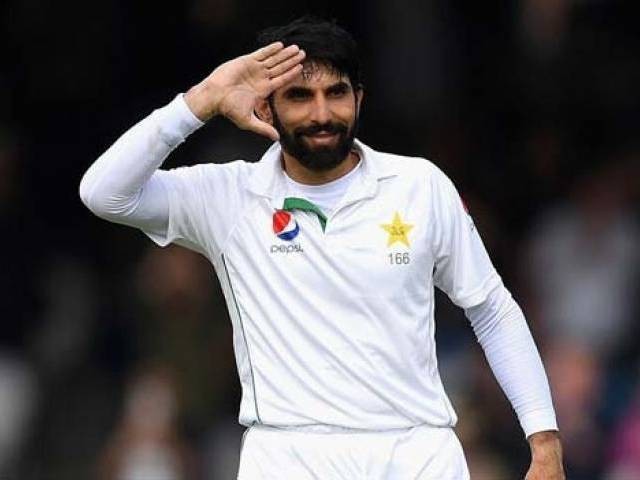 The captain of the number one Test team in the world did not always enjoy a smooth terrain though. PHOTO: SHOAIB MALIK/TWITTER

He made Pakistani cricket boring, but our team became predictably consistent with their performances under his leadership. Fortunately, the flamboyance that rode on erraticism is now missing from our Test team. They have started playing methodically and there seems to be a plan and a strategy being followed in each game and situation.

The captain of the number one Test team in the world did not always enjoy a smooth terrain though. It has been a steep climb for Misbah, but thanks to his hard work and persistence, he made it to the top.

The Misbah that we cheer for now was once the most ridiculed sportsman of this country. He is the hero of a story that only unfolded towards its end. He’s that survivor on a sinking ship, who not only makes it himself, but also rescues hundreds of others and is commended once everyone makes it to the shore. His is a tale of someone standing up every single time after being repeatedly knocked down. Misbah is the unsung champion of Pakistani cricket. It is about time we look back at his journey.

After making his first class debut back in 98-99, Misbah had to wait till 2001 to make his international Test debut and another year after that (2002) to feature in his first ODI match (both were against New Zealand). His entry into international cricket wasn’t one that could guarantee him a permanent place on the side though.

But we kept catching glimpses of Misbah every now and then in the team after that. He wasn’t a regular on the side until 2010. Interestingly, Misbah was not selected to play a single international match in any format of the game for Pakistan between 2004 and 2007. Even in 2004, he was selected to play only one ODI.

It was the inaugural T20 World Cup back in 2007 that made Misbah a name to be known across the cricketing world. But it wasn’t the way Misbah would’ve preferred. His famous paddle scoop in the last over of the final against India ruined everything he had worked for before that fateful match.

Misbah averaged an outstanding 54.50 in the seven matches that he featured in with three not outs and two 50s. All these runs came at a strike rate of nearly 140 runs per 100 balls. Even in the final match, Misbah walked in to bat for Pakistan when the scoreboard read 4-65.

It was from there till the third ball of the 19th over that Misbah remained rock solid while facing the Indian bowling attack and scored a crucial 43 runs off 38 balls. He even hit four massive 6s. Unfortunately, none of that was recalled and the only thing Misbah came to be known for was his last shot.

As far as T20 internationals are concerned, what many people do not know is that Misbah, till date, ranks number one as far as batting average is concerned. Misbah averages 37.52 in the 39 T20s he has played for Pakistan (with a strike rate of 110.20). On the domestic front, he captains Islamabad United in the Pakistan Super League (PSL), which is also incidentally the current PSL champion.

When it comes to ODIs, Misbah is remembered for his slow batting in the semi-final of the 2011 World Cup against India, which Pakistan lost. He was given the title of ‘Tuk Tuk’ following those innings and the entire blame was put on his shoulders for the team’s loss and exit from the mega event.

Misbah is remembered for his slow batting in the semi-final of the 2011 World Cup against India, which Pakistan lost.
Photo: Reuters

What critics tend to ignore though, is the brilliant contribution this prolific batsman had made towards reaching the semi-final of the tournament in the first place. Misbah, with three 50s in the six innings that he played in the tournament, was the highest run scorer for Pakistan – averaging a marvellous 49.60 runs per innings.

He has also captained Pakistan in ODIs. His captaincy record in the 50 over format may not be as successful as other prosperous captains of the world, but some of the most notable accomplishments include him becoming the first (and till date) the only captain from a South Asian touring side to lead his team to victory in an ODI series against South Africa in South Africa. This happened in 2013, just one year after Misbah lifted the Asia Cup for Pakistan (for the second time after 12 years) at the Sher-e-Bangla Cricket Stadium at Mirpur, Bangladesh.

Back in 2010, when Pakistani cricket was arguably at its lowest after the spot fixing scandal, Misbah was given the responsibility to lead Pakistan in Tests – Pakistan ranked 6th in the ICC Test rankings at that time.

It was from there that Misbah, in his own cerebral way, started his journey as a leader to make Pakistan reach the top of the ranking table for the first time this year. Misbah, so far, has led Pakistan in 46 Test matches. Pakistan won 22 out of these 46 Test matches, with a winning percentage of 47.82 and a losing percentage of only 28.26, making him the most successful Test captain of Pakistan till date.

As a batsman, he has proved himself to be an individual who blossoms with each performance, and once given the additional responsibility of leading his side, he manages to do better. In the 65 Test matches he has played so far for Pakistan, Misbah averages 33.60 as a batsman in games where he is not captaining his side. However, his average rises to an astounding 54.93 in the 46 games in which he has captained Pakistan.

He holds the record for the fastest Test 50 (off 21 balls only) and is second in the list for the fastest 100 in Test cricket (off 56 balls only) sharing the spot with the great Sir Vivian Richards. Incidentally, Misbah also thrashed the Aussies for his fastest century and 50.

He was named the best Test captain of the year in 2015 by The Daily Telegraph and no eyebrows were raised when this was announced.

He was named the best Test Captain of the Year 2015.
Photo: AFP

Misbah achieved all these accomplishments without having played and captained a single Test match on Pakistani soil. This pretty much sums up how difficult his journey has been.

Misbah is no Imran Khan, nor is he Shahid Afridi or Wasim Akram.

If you must compare, he’s probably someone like Inzamam ul Haq. But he’s not as naturally gifted as Inzamam was. Come to think of it, Misbah is just Misbah. His tenacity, strength of will, mental and physical fitness and extraordinary leadership skills make him stand out from the crowd.

This piece isn’t just about my admiration for Misbah’s prodigious services towards this country, but is also a humble effort to make amends for all the disrespect this nation has shown him.

He’s a legend, and I hope he receives a respectful farewell when he retires from the game.