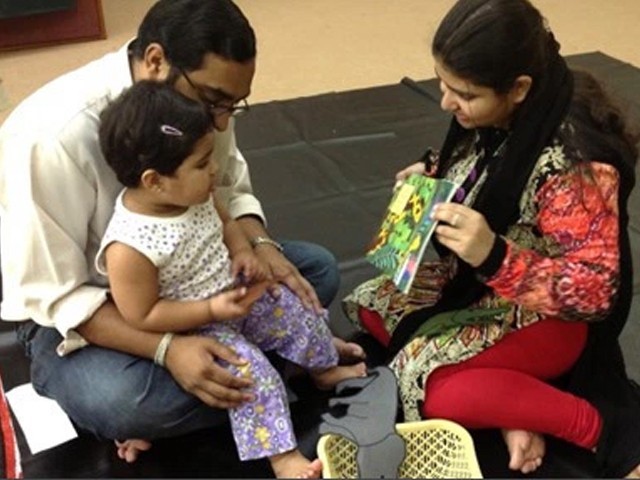 Giving in to such tantrums is a direct consequence of the utmost care and pampering that most Pakistani parents provide to their children. PHOTO: PADERBORNER BLOG

Having lived abroad for nearly five years, I have become a keen observer of certain behavioural differences between Pakistani children, and those raised in the US or the UK. I firmly believe that cultural differences in early childhood decide who we become in our adulthood. A lot is determined by how parents and family members react to a child’s behaviour in his initial years of life, thereby instilling in him either a rightful or an inappropriate sense of what is correct or wrong.

Each year during my annual trip to Pakistan, I noticed aggressive behaviour in Pakistani children which people in our country conveniently term as ‘childhood zidd’ (stubbornness). Some consider it an innate feature of infancy, while others may find such behaviour cute or even hilarious.

Last year, I saw three-year-old Ali lying down flat on a marble floor in the midst of a tantrum. Facing downward, he kicked his right leg furiously each time he wailed. When his kicks and moans did not grab the desired attention, he started banging his forehead where he was lying on the hard floor.

This propelled everyone in the room to act in accordance with the toddler’s demands. Instantly, Ali’s mother came running with the iPad he was crying for, while his grandmother kissed Ali’s forehead and caressed his red, tear-stained cheeks. Just seconds later, the three-year-old was grinning ear to ear and banging his head to the beat of his favourite cartoon song. Little Ali had won his battle ingenuously, and with ease.

It’s true that Pakistani mothers and grandmothers are amongst the most caring ones in the world. Every now and then their hearts melt as their children wail. While this sympathetic state is laudable in some scenarios, it should be cautiously monitored, mitigated, perhaps even avoided at times – just like the one mentioned earlier. The situation is a self-witnessed, perfect display of negative attention for a child, the pitch and duration of his tantrum will most likely increase the next time he is denied access to passive screen time on his desired gadget.

By giving instant and unwarranted attention to the child’s inappropriate behaviour, we are negatively reinforcing the notion that crying and yelling can grant him anything he wishes. The rage and frustration in the child builds up with time as we increasingly reward him for his negative behaviour.

Giving in to such tantrums is a direct consequence of the utmost care and pampering that most Pakistani parents provide to their children. Likewise, it can also result from one or more parents’ inability to tolerate the crying sound for more than certain duration of time. Acting readily – at times blindly – in accordance with the child’s wishes seems the easy way out during that moment of tension, at times frustration, when one is trying hard to gather himself after a long day at work.

While doing so, we fail to realise that our instant submissive reaction in that moment will negatively build upon our child’s moral instincts and social behaviour. Sadly, this is exactly what our grandmothers and their mothers have practised with their kids and grandkids – particularly boys – in the yester years.

This unhealthy dose of care and attention, even during times when it should be totally avoided, is one of the reasons that build up rage and impatience in children. I often wonder if this aspect of upbringing is perhaps what makes us so intolerant, annoyed, and disgruntled as a nation, especially every time something goes against our wishes. It seems that we’ve been born incapable of practising actual self-control and patience. I strongly believe that the amalgamation of a child’s emotions and character in the future is dependent on how his parents reacted to his behaviours – good or bad – particularly, in the early years of his life.

By the age of two, children experience some understanding of morality. Their feelings begin to be triggered by what is right or wrong. Unfortunately, this is the time when most parents in Pakistan are yearning to make their kids learn ABCs and 123s, so that they can boast about their child’s “intelligence” prior to even joining school. This is an unfavourable attitude, the roots of which have slowly scathed our children’s early years with the worthless and unwarranted pressures of the world.

At least in the old days, parents weren’t as panic-stricken or possessed by the insane desire to make their kids outperform others in academics. It was either incessant love and care, or an ill-disposed spanking which their children’s negative behaviour warranted. While none were the correct course of action to be followed by parents in their child’s moment of inappropriate aggression (considering both granted the child the attention he sought for) they were at least constructively circled around fostering the child’s upbringing during an age when it most needed.

Nowadays however, the focus of renovating a child’s behaviours at a tender age has been drastically mitigated by the hungry race and greed for attaining academic intelligence, good grades, and related achievements that can be bragged about. While doing so, we have forgotten the art of cherishing the most precious moments of our little one’s lives by filling their laps with iPads, and their hands with an insane number of automatic, unproductive gadgets singing out the alphabets and numbers to them. When our children moan for these prized possessions, we fall prey to their tears and frustration and reinforce their negative attitudes when it is most undesirable. It is an unhealthy mix of care and competition, which Pakistani parenting currently revolves around.

Last week, here in Massachusetts, I saw a four-year-old in the middle of what could have become a highly repetitive negative behaviour, if addressed wrongly by her parents. Sitting on a bench in a children’s playground, I witnessed a perfectly healthy reaction by the child’s parents to their daughter’s aggressive moaning, on retreating. She didn’t want to leave the park despite two initial warnings from her mother, and hence threw a tantrum on the thought of going back home. As she lay protesting on the cold rubber mulch beside the playground slide, her mother started making her way to the car. Meanwhile the dad, sat patiently on the bench, and busied himself on the phone without throwing the slightest glance at his daughter. Consequently, within seconds of not being given the desired attention, the kid came over to her dad, gave him a hug, and walked back to the car herself.

I couldn’t help compare and contrast this situation with a Pakistani child and her parents in place. I envisioned their responses to the tantrum in my mind. Some hugging during the crying time was the primary image that formulated in my mind, followed by dragging the child to the car in utter helplessness. Perhaps, I have seen this, and similar reactions manifesting in different Pakistani playgrounds before.

It is true that children demand a lot of care and attention in the early years of their lives. However, an excess of everything is wrong; hugs and pampered attention during a tantrum, the instant reward given after a high-pitched protest, or the constant unhealthy quest of academic limelight – instead of a healthy mission of rightful upbringing – are all factors detrimental to instilling correct moral instincts in our children in their most important years.

Parenting is a lifelong, arduous, yet meaningful gift from God. It is a constant attempt in learning to shift between fruitful attention and essential ignorance between a child’s momentary happiness and the thought of his future self and between loud weeping and vibrant giggles. Our reaction in each of these sweet and rough moments tests us as a parent.

It certainly takes a village to raise a child, as an old African proverb goes. We need to ensure that in the village of various behaviours, challenging or rewarding, we play our part well.