No Air China, your racist advice was not needed 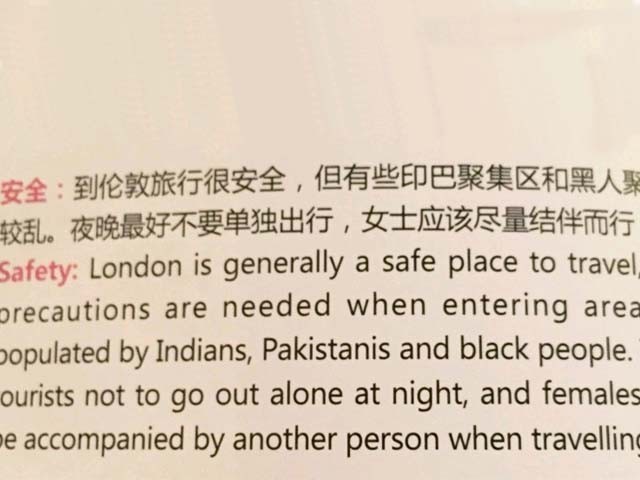 The fact that Indians and Pakistanis, two very bitter enemies, were lumped into one category shows= how pointless the enmity between the two countries is. PHOTO: TWITTER

Pak-China relations have always been formidable mainly because China is Pakistan’s closest ally and staunch business partner in large-scale infrastructure projects like the China-Pakistan Economic Corridor. The two countries often express loud protestations about their eternal friendship and cooperation in light of India’s anti-Pakistan aggression and sentiment. So it would seem the overtly favourable sentiment expressed by the diplomats of both countries would be mirrored by the inhabitants of China.

However, this wasn’t the case when a seemingly innocuous statement mentioned in Air China’s in-flight magazine offered travel advice about living in London. The statement was splashed over social media for all the wrong reasons.

The advice clearly states that areas inhabited by ‘Indians, Pakistanis and blacks’ should be avoided and females walking around these areas shouldn’t be unaccompanied late at night. The fact that Indians and Pakistanis, two very bitter enemies, were lumped into one category shows just how inseparable and pointless the enmity between the two countries is.

What’s worse is how racist the post clearly is by singling out these three ethnic minorities from the thousands that populate such a vibrant and diverse city as London. The advice was in extremely poor taste and disturbing considering Air China is a big player in the aviation industry and reflects poorly on China’s attempt at becoming a serious contender in world politics and international development.

Regardless of Pakistan and China’s friendship, it seems underlying racial issues and stereotypical behaviour are thorny issues that Chinese people haven’t addressed appropriately. There is still the perception that people from South East Asia and black people are somehow inferior to the rest of the world. These perceptions are perpetuated by mainstream media portraying Pakistanis as terrorists and black people as criminals.

Even the British Pakistani mayor of London couldn’t prevent such inflammatory statements and such negativity seriously undermines a strong relationship between the two countries.

I understand that Pakistanis, both at home and abroad, need to work extremely hard to shed the negative perception associated with Pakistan but ‘friendly advice’ like the one published in Air-China’s magazine certainly doesn’t help an already fragile relationship.

It also abhorrently misrepresents what London is like. It is no longer acceptable to hold such views in the globalised world we now live in and I hope Air China takes this into consideration and issues a sincere apology in next month’s publication.