National Accountability Bureau: Accountable to nobody 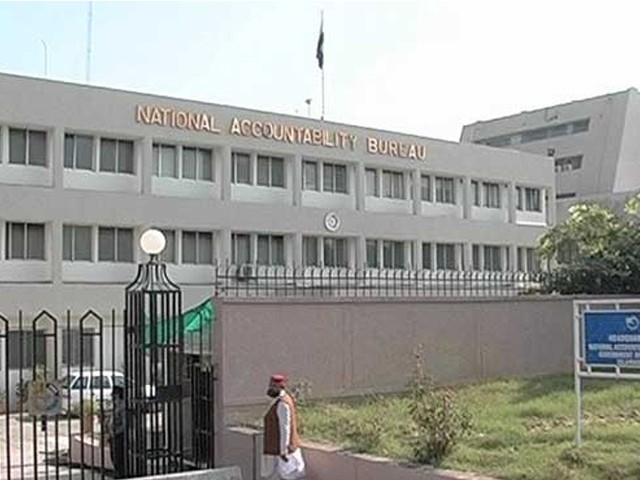 I am sure that everyone is well aware of the impact NAB has had over the last couple of years. PHOTO: DUNYA NEWS

On August 11, 1947, the father of our nation , called corruption “poison” in his speech to the constituent assembly. He said,

“One of the biggest curses from which India is suffering, I do not say that other countries are free from it, but, I think our condition is worse – is bribery and corruption. That really is a poison. We must put that down with an iron hand.”

He went on to say,

“Along with many other things, good and bad, has arrived the great evil – the evil of nepotism and jobbery.”

Unfortunately, we all have to agree, that in our country, corruption and bribery is the only way to get things done. The bulk of people ignore it and leave it to the specialist big boys to deal with and the National Accountability Burea (NAB) like most institutions, does not fail to stand out as entirely dysfunctional.

For those of you who do not know, NAB was set up during General Pervez Musharraf’s government as a means to tackle large scale mega corruption cases with the primary object of recovering state money from those persons who have misappropriated or removed such money or assets through corruption and misuse of power. It functions under a piece of legislation called the National Accountability Ordinance 1999 (NAO’ 99).

I am sure that everyone is well aware of the impact NAB has had over the last couple of years. It has struck fear in the hearts of many, so much and so that the second they hear the name NAB or see NAB written on a piece of paper they become silent and look as if they have seen a ghost.

Is that fear justified?

The answer is yes.

If you have ever read through the NAO’ 99, you will understand the cause of this fear. The NAO’99 is a draconian piece of legislation with all offences under the legislation being non-bailable. The offences under the NAO’ 99 are that of corruption and corrupt practices. Making these offences non-bailable is a classic infringement of the right to freedom and liberty of any individual charged with these offences because what happens in reality is that once NAB decides to arrest someone for these offences, they have 90 days to file a document called the reference.

I have been researching and watching NAB work and I am horrified at the misuse of discretionary powers entrusted to it and its extremely dismal performance of the last three years which is high on rhetoric but in reality, nothing tangible is achieved. Its activities in Sindh border a despotic and draconian witch hunting approach where it operates without any oversight, use complaints selectively to enquire and investigate cases which do not fall within its purview.

The NAO’ 99 is a special law promulgated to eradicate mega corruption whereas NAB has not investigated any large corruption case and what can we say about their conviction rate when most of them are over turned in the high court.

As an institution, in the last three years NAB has not filed a single reference against the ruling party at the federal level or provincial level. Under former military majors and Lt Colonels (eight of whom are now being investigated through the CJP’s suo-moto notice against their illegal appointments) it has converted pending enquiries into investigations. Most of those in NAB custody are either low ranking officials or private persons with corruption charges of less than its stated SOP of investigating cases over 100 million. NAB has its own prosecutors, judges and courts. The courts are most commonly known as conviction courts.

So what happens when a complaint is put forward to NAB?

Once it is put forward, NAB conducts an enquiry into the matter. When the case is converted from an enquiry to an investigation, NAB can arrest whomsoever they will. They have 90 days to file the reference against the person arrested. Once the reference is filed, they can take up to a year or more to frame charges and commence trial and the accused has no recourse so he/she remains languishing in jail till they can prove their innocence. As stated above, these offences are non-bailable so the accused, who may well be innocent, is meant to remain in jail till they can prove their innocence.

The ironic bit is that there is an alternative relief available, which is to file a petition to the high court for bail. However, it is rarely ever granted. The High Court has a dedicated a double bench which mostly rejects these bail applications. The reason being; when the High court is deciding whether to grant bail under the petition, they consider whether the prosecutor has produced sufficient material to show that there are reasonable grounds to link the accused to the offence. So long as the prosecutor can link you to the commission of the offence, even if you are just the innocent bystander, this application will be rejected.

Once bail is rejected from the High Court, the Supreme Court rarely provides relief. Court directions for speedy or day to day trials falls on the deaf and dumb and cases go unheard for years and years. The accused remain in jail, the lives of their families are disrupted, and justice becomes a mockery.

That is the despotic nature of the NAO’ 99.

You are guilty until you are proven innocent. I am not making this statement based on what I have just written above, it is actually within section 14 of the NAO’ 99 which states that so long as it is proved that the accused has accepted an amount of money or any gratification for a favour shown to the accused, it will be presumed that you have committed the crime unless the contrary is proven. In simple terms, as long as the prosecutor can show that some money exchanged hands, the burden shifts on the accused to prove that this was innocent.

Now, from a legal point of view, it makes sense to have a burden of proof shift on the basis of a fact being proven. However, in Pakistan, it does not work out in the way it is intended to. A distinctive feature of NAB is that under the ordinance, accused persons can opt for a plea bargain or a voluntary return. It acts like a settlement outside of court, which is again a normal feature of modern day courts. Nonetheless, NAB uses this feature in an extortive manner as you pay for your freedom even if you have done nothing wrong.

This brings us to a very important question.

Who is NAB accountable to? How does the public know that the crimes being investigated are actually something to investigate?

Curious is the example of reference 16 of 2016, in which a retired assistant commissioner and his son were arrested. The son, who is a car dealer, had transactions of Rs20-30 million in his account, which is the price of a single luxury vehicle these days. The father had no misuse of power ascertained and just because his son’s bank account reflected these transactions, they have been convicted for 15 and 10 years respectively. If seen in contrast to our prime minister’s children who publicly have been stated to own properties in London valued in billions and their father’s tax returns establish that it cannot be accounted for wealth, but NAB does not even consider enquiring into this matter.

In another case, few references were filed on the former management of Benazir’s Housing Scheme who have caused no loss to the national exchequer and through interest accrued made over 5000 houses for the poor yet quite a few of its managers were stuck in jail for over a year.

In another case a 78-year-old retired KDA official who has proven his innocence has been in jail for over a year, along with a blind 74-year-old who has nothing to do with the case and cannot even move on his own. He just has his head titled upwards towards the sky hoping for mercy. Whereas the former military officers, probably suffering from the ‘bloody civilian syndrome’ are sitting comfortably in their offices, going after whoever their bosses want victimised and get convictions for the sake of numbers.

So the question is, where is the justice? When did we become a country which denies its men their basic right of bail for something they may not even be guilty of? When did we become a country encouraging the idea of guilty until proven innocent? What is the justification for the acts of this draconian bureau which has done nothing of significance to date? How many large scale corruption scandals involving amounts of more than Rs100 million has NAB successfully closed?

You will notice my use of a specific amount i.e. Rs100 million. It is based on the SOP of NAB which states the kind of cases NAB will be investigating. Interestingly enough, there is a loophole in the SOP stating that they can investigate any other case falling within their purview irrespective of the amount involved and with approval of the chairman.

In essence, the reality of the situation is that we have an Accountability Bureau with arbitrary powers and no accountability to anyone. It has its own courts, its own judiciary, its own prosecutors and its own processes. It has super legal powers to deny relief to whomsoever they please and give relief to whomsoever they please (as long as they can pay for it).

Nobody is safe from this Bureau because of its arbitrary powers. To disrupt someone’s life is equal to killing him as stated in the Holy Quran. But this institution has no fear as they are not accountable and are allowed to extort from the innocent. They give protection to the corrupt whereas the innocent pay for their freedom.

The author is a Barrister and the recipient of the Joan Denning Prize for being the top performing student in the Bar Professional Training Course amongst all Commonwealth countries. Her interests include writing, reading and public speaking.

Why is our criminal justice system punishing a paranoid schizophrenic?

You should know your nikkah nama before signing it