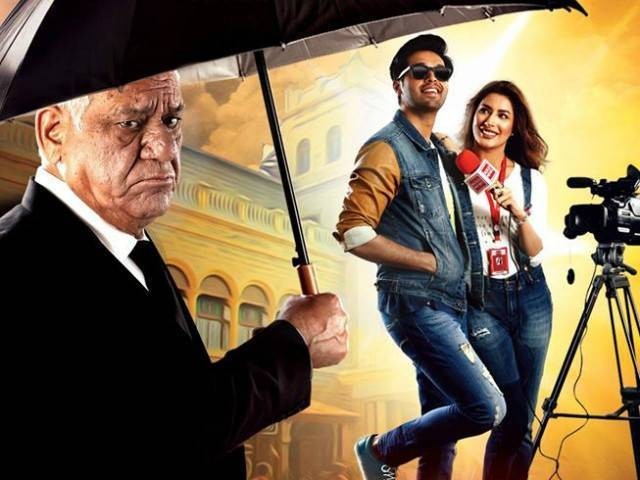 The positives in the film outweigh the negatives by a distance. That makes Actor In Law a thoroughly entertaining film.

Let me admit that I did not know who Nabeel Qureshi was before entering the theatre to watch Actor In Law. I did not watch Na Maloom Afraad (2014), primarily because of its eerily similar appearance to Hera Pheri (2000), until I watched it a couple of weeks back. Nevertheless, the trailer of Actor In Law was intriguing despite, yet again, giving a similar feel to that of Govinda’s Kyo Kii… Main Jhuth Nahin Bolta (2001), which was similar to Liar Liar (1997) of Jim Carey. I was intrigued because it’s not very often that you get a chance to see Om Puri in a Pakistani film.

If Actor in Law was made 30 years ago, Amitabh Bachchan would have starred in it and it would have been directed by Mamohan Desai or maybe it would be a Tinnu Anand film. In fact, it has a dance sequence on Andheri Raaton Mein Sunsaan Raahon Par paying homage to Tinnu Anand and Bachchan.

I understand that it is a huge compliment to Qureshi and I agree I have taken great liberty in drawing this parallel. In my defence, Actor In Law has all the ingredients of a Desai masala entertainer. A good looking hero who can act, struggling actor, witty comedy, a bit of overacting by some characters, dances, rain, a message of secularism and a father-son hug. The only thing missing is a trademark Bachchan drunk scene which is okay to miss in its Pakistani version. People of my generation who still watch Amar Akbar Anthony (1977) and Kaalia (1981) with the same enthusiasm as always are always entertained by masala films.

The story is not something you have never seen before – a father-son conflict for the son not taking his life seriously, irreverence of the son and its quirky outcomes etc. This is back to basic stuff. Just like Desai films, Actor In Law is more of a social drama wrapped in comical treatment. In that context, it’s a more mindful film than its predecessor Na Maloom Afraad.

Mehwish Hayat’s accent bothered me for a few minutes before it was revealed that she is playing a minority girl.

Load shedding is a nuisance and is taken to court.

A woman standing up for her right against sexual harassment.

The best thing is it’s not your holier than thou preachy film. Actor In Law conveys these messages in an easy going way like explaining complex mathematical equations through painting on a canvas. It makes things easier on the eyes.

The screenplay is generally tight with few exceptions. The climax court room drama was weak and political antagonists kept coming in and going out of the picture, lacking any clear motive. The protagonist’s role in the second half, especially towards the climax is minimal and other characters take over the control. It would have made it rather interesting to see if Shaan Mirza himself had tried to come out of his conundrum instead of leaving it all to the heroine and eventually his father.

Having said that, the father touch in the end was a classy finish – not from a logical viewpoint but from an emotional angle. Shaan’s emotions kept getting the better of him throughout the film, though. His eyes got wet easier than a London afternoon, at times unnecessarily.

The film belongs to Fahad Mustafa. He’s a complete package. Acts well, can dance and has impeccable comic timing. It doesn’t come as a surprise that Om Puri was all praises for him after wrapping his work on Actor In Law. His emotional scenes, even though excessive in number, are very well done. Not many actors of his age can show the range he has shown while carrying the film on his able shoulders. He is a long term prospect for the Pakistani film industry, which is going through yet another, and by far the most successful revival in its history. We will need more from Fahad if this revival has to sustain for a long time.

Speaking of Om Puri, there you have a veteran actor reminding you of why he is one of the best actors in the business. He could have done this role in his sleep. Credit to the producers for picking him over others as this role could have easily gone to another actor and would have lost its impact.

Mehwish Hayat has put in a decent performance. She is not the best thing about the film, but does not let you down either. Saleem Mairaj is fantastic, Nayyer Ijaz is as good as ever and Alyy Khan is reasonably worthy. Khalid Anum is poor in his cameo, going over the top and is not funny. Rest of the supporting cast, especially the comedians are a very apt ensemble.

Shani’s music is not overwhelmingly beautiful, but it is good and fits the overall mood of the film. While the title song is well timed and choreographed, Khudaya by Rahat Fateh Ali Khan sounds like a straight inspiration from Ismail Darbar’s Tadap Tadap from Hum Dil De Chuke Sanam.

My personal favourite part of the film is the picturisation of the song Dil Dancer Hogaya. It is artistically done, especially towards the end when Fahad actually takes up the courage to invite Mehwish for a dance and then stops. It was a sweet little moment of Imtiaz Ali’s magic and sensitivity. Also, full marks to the production design team for showcasing Karachi the way they have shown in it – very relatable.

Qureshi seems clear in what he is trying to achieve with Actor In Law. He is not creating a Moor or a Manto, but he is not creating a Wrong No. either. He has kept things simple and would have made Manmohan Desai proud if he were Desai’s protégé.

I keep referring to Desai because this is a brand of cinema which was established decades ago and has stood the test of time. Even today Farah Khan and the likes try to emulate the same formula and have not been able to deliver the same output. Qureshi’s work is a lot closer to Desai’s brand of cinema than a Tees Maar Khan or a Happy New Year types were.

Actor In Law is vaguely generic at times and refreshingly original at others. A lot of scenes in the film could have looked unnatural or weaker if it was not for Qureshi’s attention to detail or creativity. Case in point the scene where Saleem Mairaj wants to tell Alyy Khan something at the elevator, or the helicopter scene conversation between two villains. His treatment of political satire is also brilliant.

Nabeel Qureshi has taken leaps of faith in some sequences while looking painfully mediocre in some. Nonetheless, the positives in the film outweigh the negatives by a distance. That makes Actor In Law a thoroughly entertaining film.