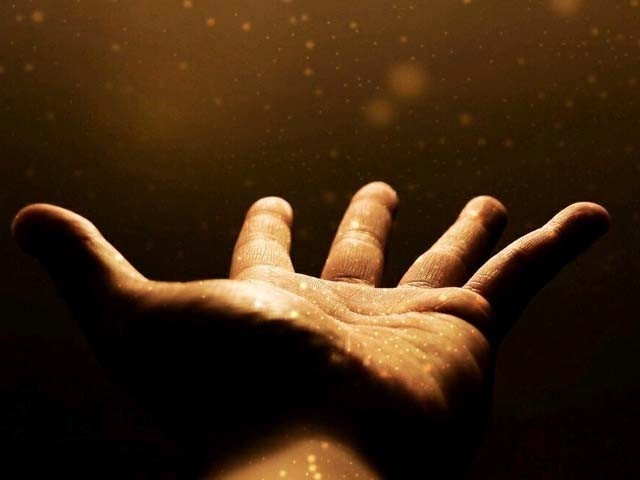 My palms are facing upwards as if I’m begging, imploring, asking. PHOTO: YOUTUBE

“Just had the same nightmare.”

His wife shook her head.

“Why don’t you see a doctor? I’ve told you a hundred times.”

This time he slowly shook his head,

“A doctor can’t help with these. Can I tell you what I saw? (And without waiting) I’m sitting awake in this bed. You are next to me, asleep. Everything looks the way it’s looking right now, with the curtains drawn, the room cleaned and spotless except for the two plates on the table, and the dim light of the lamp falling on the bedside.”

His wife looked around the room, confirmed the description, wondering why the two plates had not been cleared and waited for him to continue,

“It’s just my hands. They extend far beyond my body. Beyond the room and the house. My hands go into streets, big and small; they carpet the roads and scale buildings of all sizes. And my palms are facing upwards as if I’m begging, imploring, asking. For what? I don’t know. But no one notices them; they never drop anything, not a single rupee. Everyone walks on my hands. They climb on them. And I can bear people walking, climbing, and falling on my hands, but not acknowledging them, not affirming my need makes my heart knock so violently that it breaks through my chest, and I wake up.”

“Yes, but look at its picture quality, screen resolution, screen size, and see its exterior; it’s hardly been used for more than six months.”

The buyer looked at the TV again, tracing his finger at the exterior, which the salesman had gotten polished a week back. The salesman knew this buyer was under his hook. It would go according to plan from here. The buyer would pretend the price was too high, and the salesman would initially refuse to lower the price but budge as soon as the buyer was about to leave, and would give a very slight discount, enough to satisfy the buyer and sufficient for a healthy profit margin.

And that’s exactly what happened, and an hour later he was smiling at the predictable nature of human beings as he counted the cash, feeling the crispiness of each note in his open palm.

Evening descended on the shop and draped it inside folds of darkness, and his staff began to leave. He pulled down the shop’s shutters and as he was about to leave, a familiar figure, weakened by the day’s heat came near. He dug his hand in his left pocket and gave him whatever he found. And got prayers in return. He smiled again. Things were balanced now, he thought. This was his balancing act. In the day, selling second-hand TVs which he ensured worked perfectly fine as long as they were in his shop. And then giving to the local, handicapped beggar. And because he never looked at the money or at the beggar, he convinced himself that his virtue was much bigger than his vice. This giving ritual had started six months ago when a man, decently dressed, had arrived in his shop.

“Why do you need the money?” he had asked.

“My mother needs to have an operation and I am the only bread-winner in the family. The cost of the operation is Rs30,000.”

He had heard such stories before and he had been advised to not trust these claims.

“Do you have any disability?”

“If you’re fine, then you can easily work anywhere, so stop wasting my time.”

“I’m already working but my earnings are not enough…”

As he closed the door behind him, the salesman had made an internal promise,

“I would only give to those who are handicapped.”

And so the giving ritual had begun.

But somehow, the nightmares had begun the same night and his heart oscillated so much between ease and unease that he often began to dread falling asleep.

——————————————————————————————–
It was a typical Monday. For some reason buyers had hardly shown up, and the whole day had seemed to be passing in a haze. His employees were either out of the shop to have lunch or had gone for a small errand. He switched on the TV and incidentally PTV came on. No one watched it anymore, he thought, and as he was about to go onto the next channel, clips of an old show, Zaavia, began to appear.

As Ashfaq Ahmad’s face appeared, he remembered his late father, and the love he had for Ashfaq Ahmad. His father had memorised his numerous quotes that he loved to share at the dinner table. He could still, sometimes, trace the soft smile his father had whenever he had spoken about Ashfaq Ahmad’s words. With moist eyes, he increased the volume.

Ashfaq Ahmad sat behind a table. There were fruits on the table – four bananas, one orange, and two apples. He could even see black spots on the ripe bananas. He was glad the setting was so authentic unlike the shows he saw today. There was also a jug of water and a glass. And an extremely serene face.

“We received a lot of letters this last week, and I am sorry I won’t be able to respond to each. Today, I will speak about only one letter because many of us may find a lesson there.”

The man who wrote the letter is in the business industry. He says that he tricks customers in buying products that are older than they look. Once the day ends, he gives a lot of money to a beggar. Before I continue with the letter, I would like to point out that when one says that he ‘gives a lot of money’ that indicates he is conscious of his own giving behaviour. And when you give consciously, that is not giving; it is merely a bargain with an expectation of a return.”

By now, the salesman was hooked. His heart was sitting on the table and he watched it beat furiously.

“Continuing with the letter, the person says that he started giving when he had seen a perfectly able man ask for money. That day, he had vowed that he would give but only to those who were disabled. But somehow despite this act of giving, the writer is surprised that he has nightmares on a daily basis, though he doesn’t describe the nightmares in his letter. He desperately wants to find a solution.”

Ashfaq Ahmed paused. A soft smile appeared on his face, one the salesman could trace,

(Give to whoever asks from you. Is it not enough for your prestige that someone begs from you? Give to the one that deserves and also give to the undeserving. So you do not stop getting what you do not truly deserve.)”

Then Ashfaq Ahmed looked at the camera. Directly at the salesman. And before the electricity went, he was sure that it was his father who had been in the screen.

His heart had by now left the table. And he searched for it around the room, finding it easily because of the loud, irregular beats. As soon as he sat down again, tightly holding his erratic heart, he woke up.

He was sweating. This was much worse than his nightmares. He got out of bed and headed to work. The day went by uneventfully, and so he waited for the night to arrive. But the night would arrive precisely at its own time, oblivious of the salesman’s needs, so he closed his shop earlier than usual, and sat, for the first time, on the pavement of his shop and waited for the handicapped beggar.

When the beggar came, the salesman implored him to sit beside him,

The salesman looked at him, surprised, not at the words, but at the voice, which he recognised instantly.

Seeing the salesman’s brows rising and trying to escape his forehead, he knew his cover was out,

“Yes, I’m the same person who came to see you six months back.”

As light carved out more of his features, the salesman gathered some courage, slowly stuffed it in his words, and asked,

His own incoherence surprised him.

“I managed to raise enough money from my job, and I was able to get her operation done.”

Again words failed him as if his own language had become foreign, or maybe it was the foreign thoughts that felt no relation to his language and refused to be carried by it.

“I don’t know. I just wanted you to realise that we are the same people.”

“How?” He asked, somehow already knowing the answer.

“You have been self-conscious of your giving every day. Though you don’t look before you give, but you already know that your money is always in the right pocket. And do you know what you put in your left one?”

“Yes,” and the person showed him all the receipts of the last six months that he had been given.

The receipts were crumpled, torn, and each of them had a different crease splitting the paper in squares, rectangles and all other possible shapes. Each crooked or straight crease in the receipts reminded him of his winding hands in his recurring dream.

I was giving nothing, he thought, and the other person smiled, hearing each thought more distinctly than his words. The salesman looked at his palms, which were, finally relaxed. The smile was the only acknowledgement he had needed.