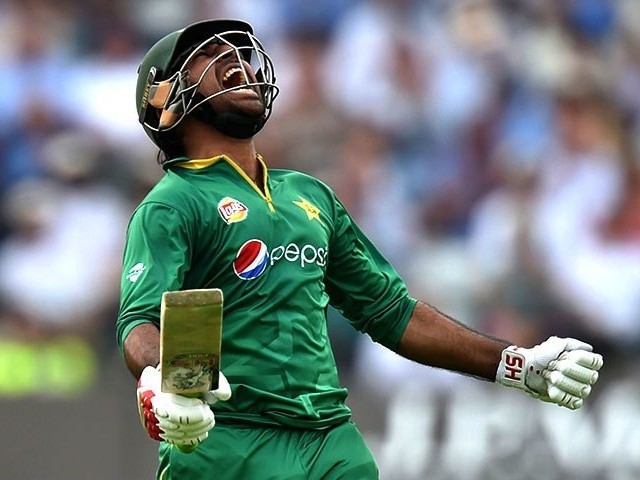 Sarfraz's 50 in the first ODI was followed by a glorious century. PHOTO: AFP

English conditions have always been a challenge for subcontinent batsmen. Seamer friendly conditions in England have actually been a test of skills, technique and temperaments. A century at Lord’s is a milestone which every cricketer dreams to achieve at least once in his career.

When our Test team landed in England, only a handful of people had hoped for a victory or a draw. But thanks to Yasir Shahs miracle spins and a double century by Younis Khan, we managed to draw the Test series.

Misbah has had an unfortunate past in his Test career, where he faced a four years break during his peak years. But since his return from this break in 2007, he eventually became an integral part of the Pakistan Test squad. He, along with Younus Khan, carry the burden of Pakistan’s batting line-up on their shoulders. Photo: Cricket 365

But when it came down to all three formats of the game − it was not Mohmamad Amir who outshone everyone in consistency and performing in challenging situations. Rather quite an unexpected member of the cricket squad emerged as a dependable go-to man during the England Pakistan series.

This unexpected member also managed to impress an otherwise hostile British media, former greats of the game, and English fans as well.

If you haven’t guessed who I am talking about by now − it’s Sarfraz Ahmed.

Pakistan were 417 for seven in reply to England’s first innings 328. Photo: AFP

“Sarfraz Ahmed is cocky, confident and is up for the challenge. He’s the best wicketkeeper-batsman I’ve seen for Pakistan since Rashid Latif.”

Former England Captain Michael Vaughan also showered praise on Sarfraz in one of his tweets.

“Sarfraz Ahmed is a brave cricketer. I have a lot of respect for him and not just for his wicket-keeping but his batting also.”

He may have started off slow in the Test series, where he scored 25, 26, 46 and 44, but he stormed through the ODI series with notable scores of 55, 105 and 90. He didn’t get to a chance to bat in the T20 match, thanks to the heroics of Sharjeel Khan and Khalid Latif, but he managed to prove his mettle as the T20 captain.

At the end of the ODI series, an article titled England’s ODI summer: five talking points from the series against Pakistan was published, which includes Sarfraz amongst the top players of the world.

This is quite a feat for Pakistani cricket. Let’s hope Sarfraz continues his successful stint as a batsman, wicket-keeper and a T20 captain for a long time.