Should school administrators be allowed to harass students over non-payment of fees? 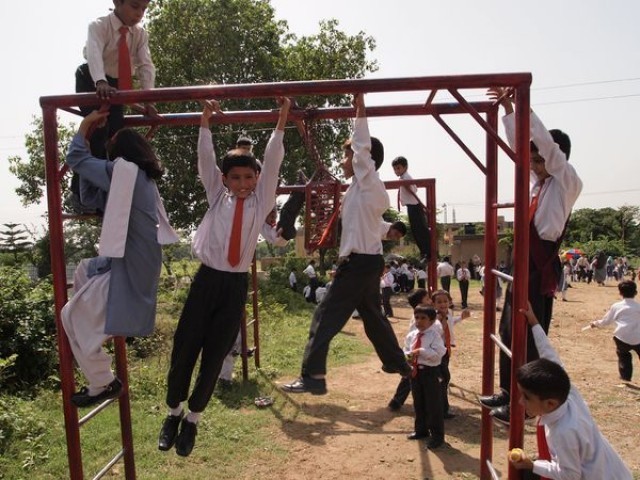 Are these children the ones who earn for their own education or who decide for themselves which school to attend? No. PHOTO: PAKMED

While winding up the lesson, the teacher turned towards the clock to check the time – there were 20 minutes remaining. Opting for a pop quiz, he asked everyone to take out a rough sheet of paper. One of the students eagerly did so – for history was her favourite subject – but as she scribbled the answer ‘Treaty of Versailles’ to the question asked by the teacher, she saw terror approaching from the corner of her eyes.

She heard the dreaded words,

“Please step outside and bring your diary along.”

And quietly moved toward the door while all the students stared at her and some whispered amongst themselves,

“She hasn’t paid the fee again.”

This is how such incidents usually pan out.

Harassing children over non-payment of fee appears to be a policy most private school religiously adhere to. This harassment includes, calling out the fee defaulters in the midst of a lesson, announcing the names of children during the school assembly and sticking warning notes in diaries. The school’s administration, in some cases, doesn’t even permit students to attend lunch-time. These children are often made to spend the whole day waiting outside the principal’s office or are plucked out from the classes at any time of the day. Some of the harsher punishments include, detaining the results or admit cards and not allowing students to take the examination.

However, in most cases, the whole scenario purposefully takes place in front of other students, who at times, happen to study with their ‘defaulter’ associates. But before jumping to the conclusion that parents should be more ‘responsible,’ it’s high time that we focus on the plight of students.

In cases when names are called out in the morning assembly, which marks the beginning of a day, these children are reduced to being ‘defaulters’ and friends and class mates find out that they have not paid their fee, their teachers find out and the administration apparently knows already. Everyone in that space is privy to the unneeded information that these children are either financially unstable or their parents are either negligent or cannot afford the education of their child.

Events such as these trigger a sense of humiliation, guilt, anger, fear and self-suspicion within the effected – they end up developing severe self-esteem issues. Such brutal behaviour has severe consequences. They shy away from their class mates and their tiny hearts begin to thud faster as soon as the secretary enters with a list. They themselves are aware of the fact that their fee has not been paid and it’s mid of the month, but what can they do?

But under such hostile circumstances, are children really acquiring the best education?

Are these children the ones who earn for their own education or who decide for themselves which school to attend? No. It is apparent these children are dependent upon their parents for the payment of their school fee.

In the process, these children end up paying an amount heftier than their fee for the non-payment of it.

While many of us would contend that parents are in agreement with the school to pay the amount on time or schools are ‘business enterprises,’ we are trivialising the problem. Education is the right of every citizen which is to be provided by the state. But our state fails to do so, instead, it expands on commercialisation. No measures are being taken for the betterment of already existing public schools. Rather these schools are being handed over to private sectors for generating profit.

What kind of education are our children receiving?

Children are sent to private English-medium institutions because they apparently provide ‘quality’ education.

While teaching, I happened to ask my students (those appearing for the Board exams) the definition of a noun. I was surprised when they answered,

“Noun is an action word.”

I was left speechless. When I asked students of grade five to solve a five-digit addition sum, except for a few, the whole class was clueless.

Students belonging to the Cambridge system (a system which is lauded for producing students who can fluently converse in English) go to language institutes, pay an exorbitant amount of fee, and try to learn to speak fluently in English. I personally feel the colonial language is one of the biggest complexes prevalent in our society.

Often students belonging to some well-reputed educational institutions in Karachi ­– while referring to a math problem or any other subject issue ­– tell me that their teacher asked them to ask for help from their tuition teacher or parents.

If ‘quality’ was to be examined – these institutions would fail miserably.

Then what is it that these institutions are good at?

They’re just good at perpetuating competition, since that is what gets the market going. They treat children as objects and tools and view them as just another source of money.

Education is one of the most profitable sectors in Pakistan. But our public education sector is deplorable, which forces parents to turn towards private institutions, which they may not be able to afford. This in turn can lead to a delay in payment of fees.

After all, privilege tends to flow upward, rather than downward, in our society.

The author is a socialist feminist repulsed by the hypocrisy, cruelty, and oppression. She is a voracious reader pursuing a Masters degree in English Literature at University of Karachi. She tweets as @lylaraza (twitter.com/LylaRaza)

What would you do if your professor called you at night and told you he’d like to see you in a sari?