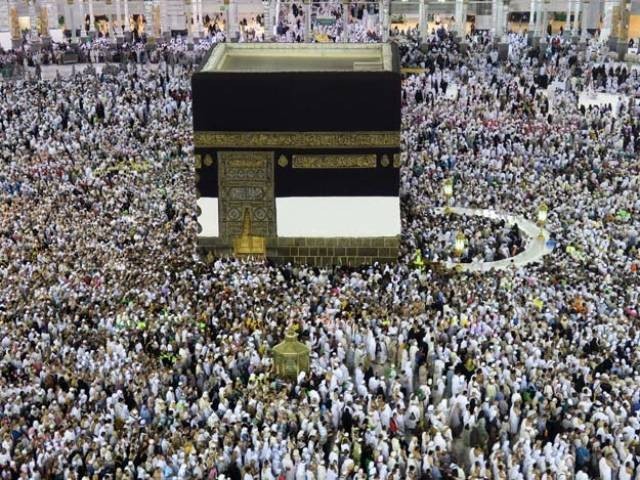 Centuries ago a group of people made their way towards Mecca. They were unarmed and wanted to go to the Kaaba for pilgrimage. In spite of a dispute between them and the citizens of Mecca, they hoped that the party controlling the Kaaba would allow honour the centuries old tradition and allow them and their sacrificial animals’ entry into the holy sanctuary. However, the tribe controlling the Kaaba had no such intention and using their hegemony for political gains they denied the pilgrims of their right to enter.

This incident took place in 628 AD and the pilgrims comprised of the first generation of Muslims. They had been led by their leader and Prophet Muhammad (PBUH) and the tribe of Quraysh had barred their way. The Quraysh and the Muslims were in the middle of a conflict and access to Kaaba was used for political purposes. The pagan members of the Quraysh tribe were able to come in the way of an Islamic rite. Realpolitik meets religion.

Since then the Kaaba has been under many empires. The Umayyads, Abbasids and Ottomans all held sway over Mecca but the Kaaba was open to all, including their political opponents. The Ottomans and Safavids had a long standing conflict but pilgrims came and went unhindered. Hajj or broadly speaking, pilgrimage to the Kaaba, was considered sacrosanct and the empires were ruled by Muslims and considered Islamic. No emperor, sultan or caliph could impose their will on the Kaaba even if they wanted to.

The politics of the region took a turn in 1932 with the birth of the Kingdom of Saudi Arabia. The cities of Mecca and Medina, so critical to the Muslim world, through treaties with colonial powers and political expediency passed into the hands of one country. The Kaaba always had a family who were keepers or caretakers, but now the ancient site was part of a thoroughly modern construct: a nation state.

This outcome has one natural outcome. Nation states by their very nature are vastly different from empires. They have political and economic considerations and react accordingly. They build alliances and break them. Through state control they can monitor movement within the country and through passports and visas they control borders and decide who passes through them. And of course, they can enforce policies that their citizens and foreigners need to follow if they don’t want to run afoul of the laws.

The holy sites and Kaaba itself is an example of that. It is thought of as a shining example of the divine unity of Muslims and removes national divisions. Faith conquers all and brings together the global community. The reality is that within the nation state, it is very much bound in the narrow parameters of nationality and internationalism. It is a carefully managed undertaking that relies on quotas and visas and the national identities are ever present.

In a normal nation state this would be this, but Kingdom of Saudi Arabia is far from that. It’s a fiefdom of one family and subscribes to a very narrow belief system. Pilgrims are told what to do even within the holy places. There are sites holy to them but which the Saudi government blocked off because the Wahhabi school of thought considers veneration of personalities and monuments as heresy.

Historical monuments such as the homes of the family of the Prophet and his companions have been razed down and religious police shoos away pilgrims who linger at the few sites that remains. The city looks under occupation and there are instructions for ‘order’, as if from a foreign ruler. The ruler carries the title Khadim Al-Haramain Al-Sharifain (Custodian of the Two Holy Mosques), that his predecessor took in 1982 and so his rules are to be followed by all pilgrims regardless of their religious inclinations. Modern constructs have forcefully collided into an ancient and divine tradition. Modernity wins.

Sadly, this victory achieved by a modern nation state is a loss for pilgrims, a classic case being the fact that this Hajj will not have any person of Iranian nationality. As a country Saudi Arabia has political considerations. It has had a long running conflict with Iran and their theological differences are one aspect of it. They vie for regional supremacy and are on opposite sides in two armed conflicts: Yemen and Syria.

At last year’s Hajj 2,236 pilgrims died, at least 460 Iranians. This was not the first time Iran had lost its citizens at Hajj, in 1987 hundreds of Iranian pilgrims were killed by Saudi police. In an already hot political climate, the Hajj incident of 2015 proved impossible to resolve. No resolution between the countries means no quotas, no visas and of course, no pilgrims. The hegemony of political power reigned over holy considerations and the pilgrims of country of 80 million Muslims, 10% of them Sunnis, will not perform their religious duty this year at the very least.

Therein lays the problem. Nation states take policy decisions or undertake negotiations based on political expediency. Alliances are made or broken accordingly and the global political climate is dynamic and transient. A timeless and pious act like Hajj is thus affected in a world shaped by business-like realities. Religion meets realpolitik.

This situation is likely to repeat itself as the regional shift in power and other factors take hold. As in this case, Saudi Arabia’s relations with a country can affect pilgrims. If the Kaaba is indeed the common heritage of 1.5 billion Muslims than perhaps they should have a say in its access so the concepts of equality and equity that are central to Islam can hold true. Keeping this in mind, Khamenei’s statement of common ownership of the Kaaba – while practically difficult – is at least worth considering. Today the conflict with Iran played a role in the pilgrims’ loss. Tomorrow it could be another country.