How do Americans and non-Muslims view Eidul Azha? 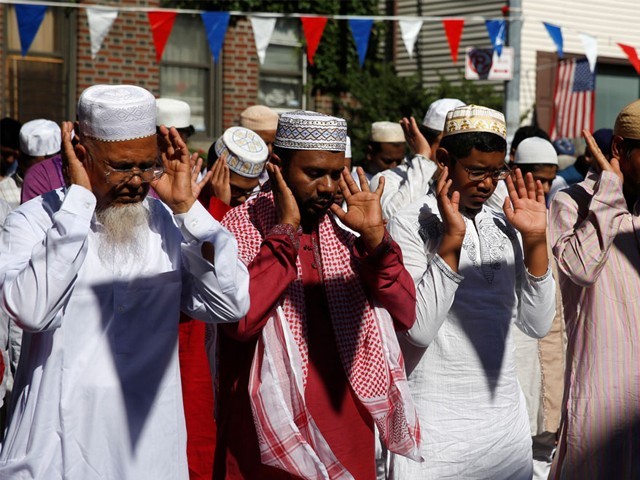 This year, a controversy surrounded the arrival of Eidul Azha, the second most important holiday in Islam, involving the holiday’s date, as the Express Tribune reported: American Muslims on edge as Eidul Azha looks set to fall on September 11th.

Muslims abroad, especially in the United States, faced the prospect that celebration would coincide with a day of mourning of those killed at the World Trade Centres. As a result, some Muslim leaders prepared for tension between their community and anti-Muslim bigots. In the New York Times, Linda Sarsour, executive director of the Arab American Association of New York, said,

“Our community is like, ‘What are we supposed to do?’ I should not have to think about that. What am I supposed to tell my kids?”

Her statement comes in context of a recent murder, in the New York borough of Queens, of an imam and his assistant, though the investigation has not determined whether this is a hate crime or related to a dispute between the Hispanic community and the mosque.

Fortunately, due to the sighting of the moon, this year’s Eid began on September 12th  in the US. And so this year’s Eidul Azha passed without additional controversy.

But how do Americans and non-Muslims view Eidul Azha?

Very few would know that there are two Eids, the other being Eidul Fitr, or that Eidul Azha commemorates how Abraham (or Ibrahim) offered his son Ishmael as sacrifice, and the divine intervention saved him from carrying out the act – even though many Jews and Christians are familiar with this parable. Outside the Muslim community, the holiday does not merit much attention.

To find out more, I talked to Muslims that I know personally in our community in the Pacific Northwest as to how they approach the holiday, including those from Somalia, Lebanon, Pakistan, and Afghanistan. Without exception they claimed to celebrate this year’s Eid quietly with family and friends, exchanging gifts, with prayers at the mosque, and if the holiday falls on a school day they might take their children out of class. But none feared any repercussions from society at large. If there were to be any controversy on a broader scale, it would have come from the animal rights activists who oppose the sacrifice of animals (a minor concern).

As Muslims adapt and integrate more with the west, the west will have a reciprocal understanding, and society will progress, a good development. Thus we should take words by Dean Obeidallah into account, who recently wrote at the Daily Beast,

“I’ve never been more optimistic about our future in America…. I’m sure the years ahead will be challenging ones for the Muslim American community. But the anti-Muslim hate we see now will fade—our nation’s history tells us so. Jews and Catholics before us endured similar barbs, slurs, and fears, and in time overcame them. Deep in my heart, I am certain that we, too, will overcome.”