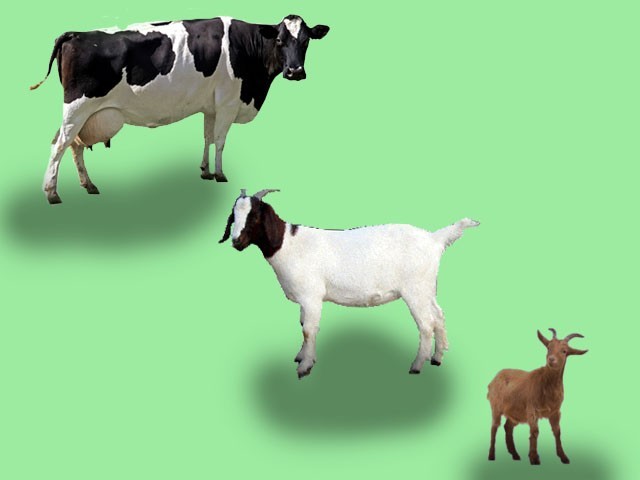 The people who buy phenomenally expensive animals on Chaand Raat are the ones who gain the most respect, awe and admiration from everyone.

This letter is to express my absolute stupefaction over your outrageous, albeit devious, marketing tactics, yet again, at Eidul Azha this year. The prices of goats and cows have escalated to a level that is beyond the financial capacity of the middle class group to afford. Even the lower upper class is having second thoughts about fulfilling this necessary religious obligation. More and more people are forced to take shares in cows.

For me, as well as for millions of other like me, I’m sure, taking shares in cows is extremely embarrassing because it openly screams of the fact that I cannot even afford to buy even a small goat. Even if I scrap up the money by pinching from the various other already tight household budgets, it is always a choice between getting a sacrificial animal or paying half a year of my child’s school fees.

My husband is least concerned with my plight during this sensitive time of year. Of course, it doesn’t matter to him since he is not the one who is forced into humiliation and mortification in front of sisters-in-law and brothers-in-law who buy not one, but two goats and show off in front of me deliberately to make my already woebegone life even more miserable.

My mother-in-law says it is my fault because I squander her son’s money recklessly the entire year and hence do not have enough for a goat at Eidul Azha. I would love to remind her that her son does not make a six figure salary and raising a family in Pakistan within the income he makes is nothing short of a God sent miracle. However, I decide to keep these facts to myself. The one thing that really makes mothers-in-law show their fangs is when a daughter-in-law bad mouths their darling son. So I save this fight for another day. Right now I have greater issues to resolve. Such as trying to figure out what kind of country I live in that makes religious obligations a matter of life and death to fulfil.

My children start whining and imploring a whole month prior to Eidul Azha about getting an animal that they, too, can decorate and parade up and down the street. I get heart-broken telling them that we cannot afford it. Even they realise by now that taking a share in a cow means that their parents don’t have enough money to buy a goat. This inferiority complex causes havoc with their poor young hearts and minds. I suspect it will worsen every year because our government is so busy gorging itself on national coffers filled with the life blood of the common man that they are least bothered by the continually worsening bakra-plight of the average citizen.

Buying a qurbani (sacrificial) animal has become so much of a status symbol in our deplorable social system that it is just as aggravating as the mania of designer dresses. Just like no one wishes to award you with a second glance unless you are wearing a ludicrously expensive designer dress, you are branded a pauper for life both within your family and among your acquaintances unless you have a couple of goats or a cow for Eid.

I often plan to raise my own goat for a whole year and sacrifice it on Eid but that entirely kills the purpose if one is planning to show off on the grand day; everyone knows you raised a baby goat to save money and you get scoffed and snickered at behind doors. The people who buy phenomenally expensive animals on Chaand Raat are the ones who gain the most respect, awe and admiration from everyone. I hate the women of this country too, who judge everyone else on the basis of their buying power and wealth. But right now my problem is my inability to salvage my family name this Eidul Azha.

Pathetically enough, over half of my country’s population lives below the poverty line and can’t even afford to eat meat for the rest of the year. But for the few that are left in the fast shrinking middle class, of which I also happen to be a heavily struggling member, buying even a tiny, frail animal is financially perilous. It is quite shameful how my dear country men use religious occasions like Ramazan and Eidul Azha to fill their cash boxes.

A close friend of mine, who gives me suggestions that are often morally dubious in nature, told me that my husband should start taking money ‘under the table’ three or four months prior to Eidul Azha as that is the only way a middle ‘classia’ can afford a qurbani animal or even a share in a cow.

She herself gets a big, fat, healthy goat every year. Now I know why.

This year she has bought two goats. I am suspecting that this year her husband has not only taken money under the table but over and around it as well. Otherwise there is no way a middle class family in present day Pakistan whose children can barely afford a decent pair of shoes from Bata can afford a fat and healthy goat.

I could fill pages and pages with the complaints I have against you guys. But I have yet to write an open letter to the designers of the country who are robbing the women blind on Eid through their marketing scams selling disgustingly designed and stitched dresses for thousands of rupees in the name of fashion.

I hope you will address my situation immediately as there are still a few days left before Eid and I still might be able to keep my head up respectably within the family and on the street by obtaining at least one, even if tiny, goat.