Eid is not what it used to be 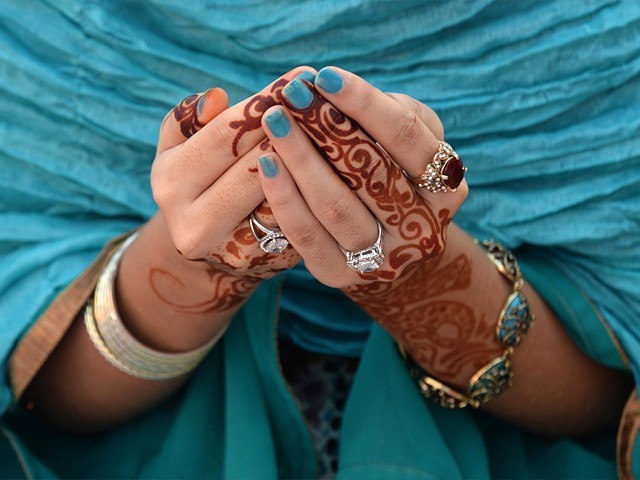 I was all dressed up in my shiny new Eid clothes, my hair was freshly made, and the scent of mehendi was distinct as I skipped my way to the gate of my house. PHOTO: PINTEREST

It’s almost that time of the year again. Yes, that time, when the city is intoxicated by the smell of rotting intestines, and fresh blood: Eid. It’s been a while since I’ve experienced it, and no that’s not nostalgia or longing embedded into that phrase. I’ve been away for the past few bakra Eids, and somehow they all seem to mesh into one in my mind. I’m trying to think back and dissect them into individual moments and memories.

This is my first Eid away from home. I wake up to Eid Mubarak messages but I’m not really feeling festive. There is no holiday from school. There is no sheer being cooked in the kitchen. There are no new clothes.

I used to love Eid. The smell of mehndi as I woke up in the morning, laced with the aura of crisp notes I was handed for Eidi. bakra Eid was especially my favourite. At one point in time, I wanted to be a doctor so I’d dissect the goat’s heart after it was sacrificed with my mini-sized doctor gloves and mask. I’d show my younger brothers where the aorta was, and how the different chambers functioned. That was when everything was new and appealing. That was also when I didn’t know much about the world. One year, and I remember this moment so vividly because it was the crux of my realisation, if realisations could be boiled down to moments and places.

That was the year I was going for the big guns, yes, I was going to dissect a camel’s brain. Every year, my neighbours put on this huge show where people from all over the neighbourhood would come to my street to watch the mighty ship of the desert be sacrificed. I woke up early in preparation because I had to be there to take my brain otherwise, God forbid, someone else would steal it (ah the naiveté that surrounds the minds of teenagers). I was all dressed up in my shiny new Eid clothes, my hair was freshly made, and the smell of mehndi was distinct as I skipped my way to the gate of my house. There was a large group of people so my father guided me through and I stood there waiting eagerly with him and my brothers by my side.

Soon after, a boy of around twelve came out, and people parted. He had a small knife-like object in his hand, and he drew back and threw it at the camel’s neck.

That was when I realised I didn’t want the brain anymore. The mighty ship of the desert fell to its knees, a sight I had never seen before because I was always afraid of camels. I used to ask my father to lift me off the camel before it sat down sat in that roller-coaster manner, at the beach.

I didn’t dissect another organ again after that.

It’s been a few years now. And my first Eid away from home made me miss it profusely. I craved the company of people of my faith, even though faith hadn’t been the basis of my friendships with people in Karachi.

After that year, Eid usually consisted of a desi meal with Muslim friends, we’d talk about Eid at home, and how different everything felt. But eventually, Eid became another holiday filled with yearning to be back home. Somehow Eid had fizzled in my mind. It was no longer about the clothes, the visiting, or even the animals anymore. It churned into a more tangible reality where all I really longed for was family.

So I guess, if you ask me what Eid means to me today, that’s what I’d say. It wouldn’t be mehndi, shiny Eid envelopes, or sheer khurma. It would just be home.