The neglected and forgotten residents of Youhanabad, Lahore 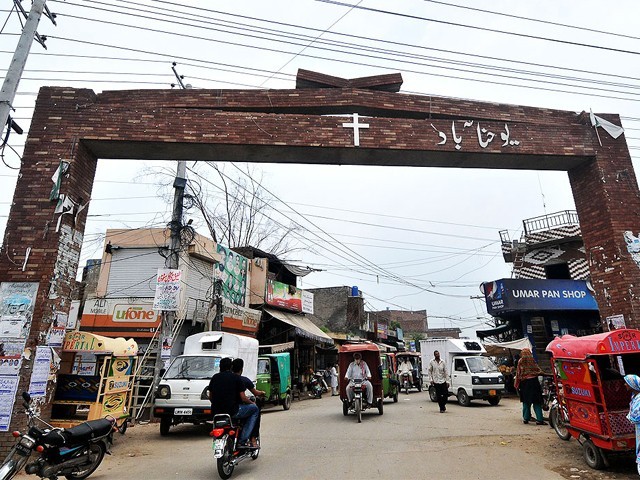 The people of Youhanabad and similar settlements have little need for our pity. What they do need, however, is due acknowledgement that their problems are as pressing as the rest of the city. PHOTO: CHRISTIANS IN PAKISTAN

My foot got stuck in the sewage, and closing my eyes I half prayed that it doesn’t consist of human waste. The groan from a friend watching from across the road, though, was enough to warrant a shudder from me. I had slipped and now was standing, ankle deep, in two days’ worth of rain water and human sewage.

The terrifying part regarding this story is the repeated variation of this occurrence. My favourite part (yes, there was one) about these streets though, was covering our heads and making our way down the road to the rairiwala, the man who sold pakoras and chips on a cart. Eventually, it became easy to turn a blind eye to the horde of flies as they buzzed hungrily around your oily brown paper bags full of half stale, semi-warm breakfast. You learnt to ignore the stench. More importantly, you grew immune to being side-lined and ignored like the overflowing gutter right outside the gate.

I am lucky because I underwent this for two months only. Lucky, because this is not what I have to wake up to every day. Lucky, because I, through zero effort on my part, get to live in a place where horse dung, human wastage, and stagnant rain water cannot pool outside my door for weeks on end.  Unfortunately, for the Christian community of Youahanabad, this is a stringent and inherent reality.

The area came under fire for suicide bombings and resultant mob violence in the spring of 2015. Home to at least 100,000 Christians based on a 2015 news report; the area does not warrant a lot of traffic from other parts of the city of Lahore, where it is situated.

A summer internship, conducted by Hum-Aahang in collaboration with the Cecil & Iris Chaudhry Foundation, led me-half apprehensive, half excited, through the doors of one of the community’s summer schools. And within a week, I sat amongst the students, now fully awed, listening to their incessant knowledge regarding their country and their dreams for making it an inclusive and tolerant place. A country swallowed by the forced superiority of its green, while the white gets pockmarked by bloodied stains.

A summer internship, conducted by Hum-Aahang in collaboration with the Cecil & Iris Chaudhry Foundation, led me-half apprehensive, half excited, through the doors of one of the community’s summer schools.

It was easy to forget that I had to pack up my notes and go home when the afternoon edged ahead, because there was little that was different about the students from the ‘poorer part’ of the city. A lot of them were artists and singers with such finesse in their work and voices that you spent half the morning with goose bumps. I had to fight the urge to ask a 10-year-old to teach me his mathematical deduction skills, and as one of the girls (an aspiring nurse because most of Youhanabad’s students cannot find funding to become doctors) recited a 20th century short story with both aplomb and animation.

I had to fight the urge to ask a 10-year-old to teach me his mathematical deduction skills.

I could only clap as hard as possible. Sunil, still in his early teens, not only sang and played the guitar, but he was a fierce orator, capable of leaving half the class speechless with his ability to critically analyse and debate on any given topic. The school itself was neat, stringently maintained and well disciplined, mostly because it was run by the community and the organisations they collaborated with.

Faiza, a practical, hardworking 17-year-old, handed me an intricately made white vase full of colourful artificial flowers, all homemade, on the last day.

“I made the vase white because it’s your favourite colour.”

Faiza, a practical, hardworking 17-year-old, handed me an intricately made white vase full of colourful artificial flowers, all homemade, on the last day.

I stared at her overwhelmed and surprised, and not just because I had always assumed she wasn’t artistically inclined.

“I learnt this at church,” she told me.

By then, I had grown used to this statement. I had seen amazing artwork, such as paintings, beadwork, sketches, and replicas of buildings produced by not only teenagers, but eight to 10-year-olds as well. And each child had told me that they had learnt it at their church.

I still have the vase on my bookshelf, where it serves as a reminder of how little I have stayed in touch with the students, and how abhorrently easy it is to slip back to your regular life.

It is easy to get clouded by the majority advantage afforded to you by society. Despite a highly tolerant upbringing, I had no idea that I possessed traits of a closeted bigot. It is easy to conduct life under the tags of “them” and “us.” Harder, to realise that there is zero difference beyond being born on a different side of the same city.

We are, currently, a living approximation of Dante’s depiction of hell; regardless of what you do, you will find a level of hell made particularly for you in this country. The older students told a story, for example, of how during the pre-election months, roads in the area had been re-paved and a mass cleaning conducted. The chief minister had personally come to ask residents for votes, and had promised, with a heavy dose of handshakes, that if they voted for his party, the community of Youahanabad could expect to see a major investment in infrastructure and education. Several months have obviously elapsed since his party had won, and Youahanabad lies forgotten at the side, like always.

What is it about us that compels us to let entire communities seep in neglect and waste? For example, according to the Pakistan Census of 1951, Hindus made up 12.9% of our population. In the last census, however, conducted in 1998, Hindus now made up 1.20% of the population in Pakistan. While our overall population booms, numerically our minorities seem to be going in reverse.

In the Constitute of Pakistan, to date a clause in Chapter 1, Article 28 states that,

“Every citizen shall have the right to profess, practice and propagate his religion.”

Yet it appears easier to live against the constitution, than by it. While we have organisations like Hum-Aaahang working to bridge communal gaps, the rest of us are fine taking our cues from radical thought-mongers who repeatedly uproot whatever emblem of peace the country tries to settle down into.

The people of Youhanabad, and similar settlements, have little need for our pity. What they do need, however, is due acknowledgement that their problems are as pressing as the rest of the city. Till we make tolerance and inclusion a part of our at-home curriculum, we will be forced to watch versions of Youahanabad succumb to the horror that is, simply, sheer neglect.

“I want to go to Rome, like my aunt did 10 years ago. I want to see the Pope,” Sunil told me, half shy and half proud of his life goal.

“Maybe if I start saving now, I can go when I’m an old man. No one is funding my trip so I guess I’ll go alone,” he laughed.

I feel certain that one day, he will.

A reader, amateur photographer, avid tea drinker, and a student of Marketing and Media Studies.

A French, a German, a British and an awesome Pakistani