Is it necessary for animal sacrifice to take place in homes? 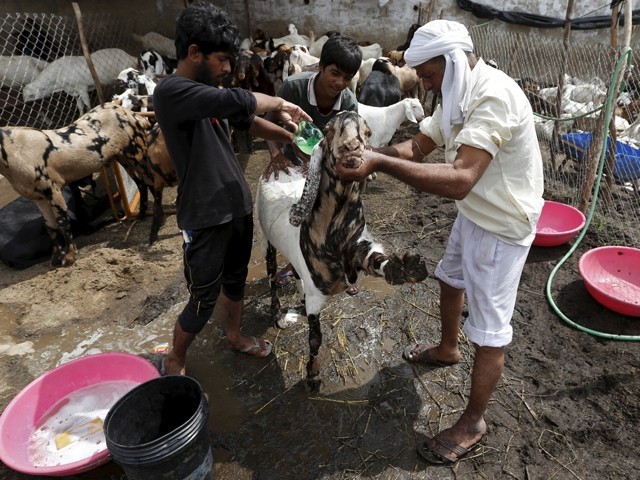 Our city fathers think it is a fundamental right of the people to be allowed to take animals to their homes, and to perform the sacrifice on the streets. The result of course is that our cities are filled with the offal and entrails of dead animals for many days, raising the distinct possibility of people being infected and dying. PHOTO: REUTERS

The year was 1348. A mysterious disease broke out, killing up to 60% of the people of Europe. It is estimated that a third of the world’s population had succumbed to the disease. Some estimates are that more than a 100 million people perished. The disease was called the Black Death, which was caused by the bites of fleas carrying the microbe from infected rats to humans. The plague was so lethal that those who came in contact with the sick were themselves infected and died within a few days.

According to those who survived, citizens avoided one another, neighbours stopped talking to each other, relatives never or hardly ever visited each other. People were so terrified that brother abandoned brother, the uncle his nephew, the sister her brother and very often the wife her husband. Incredibly, fathers and mothers refused to see and tend their children, as if they were not theirs. Soon, there was no place to bury the dead. Bodies were piled one on top of one and other in mass graves.

I remember an aged relative telling me about a plague which struck Sindh in the 19th century.

“Men would take a dead body to the graveyard, and when they returned, there were three more bodies to bury.”

Could this kind of thing happen in Pakistan, especially in Karachi?

This city is already sinking under huge piles of garbage that is causing untold misery to the people. Maybe people are already dying prematurely in small numbers due to infections caused by the bites of insects feeding on the garbage. But of particular concern is the Congo virus, which has surfaced relatively recently.

We had never heard of this lethal virus until a few years back. This year more than twenty people have already died, but these are the reported deaths. Everyone knows that in the rural areas of the country, men and women die daily even though they are young, and their relatives do not think it necessary to notify the health authorities because it is so commonplace. It looks like the Congo virus is getting stronger every year.

Even though health experts have repeatedly warned the authorities not to allow animals to be sacrificed inside cities and towns, every year almost every street witnesses the slaughter of animals by the residents.

In most other Islamic countries, at the time of Eidul Azha, animals are slaughtered in designated areas outside towns and cities. I performed Hajj 10 years ago. I did not have to do the slaughtering myself. The Saudi government charged for it and gave me a receipt. Yet our city fathers think it is a fundamental right of the people to be allowed to take animals to their homes, and to perform the sacrifice on the streets. The result of course is that our cities are filled with the offal and entrails of dead animals for many days, raising the distinct possibility of people being infected and dying. And the danger of insects carrying the virus to the people is greater this year due to the recent rains which contributes to increasing the insect population. To minimise casualties, it should be mandatory for the animals to be kept and slaughtered outside the city.

What would happen if the Congo virus or any other microbe develops into a hideous super germ, with an incubation period of more than a month? We would see people falling ill a month after Eid, and doctors not knowing why they were dying or what they were infected with. If you think there is little or no chance of this happening, just consider that we had no victims of the Congo virus or even the Dengue virus until a few years back. But will those who manage our affairs do something to prevent it, or will they wait until there is a major disaster?