Talking about Sufism: Faiz vs Askari 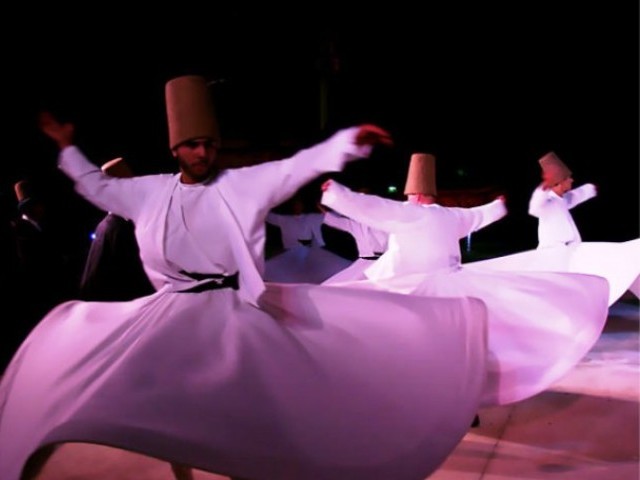 it was the Wahhabis who first declared Sufi orders a heretical innovation.

The national politics have brought us to a point where everybody is engaged in a religious debate. While my contemporaries brave the treacherous ocean’s currents, I, for one, have to plead ignorance of the finer points of the Quran and Hadith studies. Akbar’s verse – I never entered a debate about religion, for I always lacked the extra intelligence it required – has served me well in the perilous times we live in. So it’s not as if I am preparing to enter the debate now; just wondering about the blessed moment when Faiz Ahmed Faiz did.

A word first about the background: After Muhammad Hassan Askari passed away, his brother found a draft among his papers and published it. The book is called Jadidyet ya Maghrebi Gumrahion ka Khaka (Modernism: An Outline of Western Fallacies). Iftikhar Arif had the inspiration to present a copy of it to Faiz Ahmed Faiz. After he had read the book Faiz wrote him a letter. The letter is included in the book the National Language Authority has recently published on the occasion of Faiz’s birth centenary. At least one of the questions raised by Faiz after reading Askari’s book appears quite relevant today on account of the suicide attacks nowadays. No harm therefore in a word or two about the subject.

When the book was first published, it caused quite an uproar in our literary circles. Many a critic was outraged at Askari but none seriously raised any questions for that required scholarship in both the intellectual tradition in the West and the Islamic tradition. In the end, the duty fell to Faiz. In a way, he commended it too, writing, “After a wonderful summary of advances in Western philosophy and sciences is provided, the most valuable part of the book in my view, they have all been dismissed as fallacies.”

Besides describing the various ‘fallacies’, Askari seems to explain how they have come to influence our religious beliefs. Faiz has raised several questions in this regard. The one I find most relevant today is: “The 119th fallacy is declaring the Sufi orders and rituals a heresy. So did we import our Wahhabism from the West?”

An eminently valid question, since it was the Wahhabis who first declared Sufi orders a heretical innovation. If the recent suicide attacks at Data Sahib’s, Baba Fareed’s and other shrines in Karachi and Khyber Pakhtoonkhwa have to be in some way justified it must be in these terms.

The explanation preferred by the Taliban supporters so far has been that the United States is behind all these suicide attacks. The liberals too have appeared to side with them on account of their chronic anti-Americanism.

Allama Iqbal had said a nation perennially judging its endeavours is like a sword in Providence’s hand. But in Pakistan we do not seem convinced of the value of judging ourselves. Most of what we do wrong and the consequences thereof get blamed on conspiracies by Jews and Hindus. The rest are credited to America. But when Data Darbar was bombed at least some people remembered that there were those among Muslims who considered these shrines and Sufi orders un-Islamic. Askari for his part had warned us that calling Sufi orders un-Islamic was the consequence of a fallacious Western idea that had infiltrated our religious tradition. And Faiz had raised the question whether Wahhabism was an import from the irreligious West.

Who will answer that one now that Askari is gone? Dr Ajmal had lent fervent support to his narrative but he too is no more.

Faiz had also complained that Askari seemed content with allowing the ‘scholars’ a monopoly on the analysis and interpretation of religious issues. But it was far from clear, given the large number of denominations, which ‘scholars’ were to be trusted. “Also, whether or not people like Ibn Abduhu, Taha Hussain, Jamaluddin Afghani and Allama Iqbal etc, even Askari, would be counted among such scholars.” The question still begs an answer.

“Had he [Askari] focused instead on the literary fallacies of modernism,” Faiz had concluded, “he would probably have enlightened many.” But holding modernism accountable for its literary indiscretions has been a job the progressive critics have arrogated to themselves. They have been at it constantly.

Now that Iftikhar Arif has published all Faiz’s letters to him (I have just received a copy) let’s see what else this correspondence throws up. The least the publication of this letter has shown is the largely forgotten existence in our literary tradition of civilised dissent.