I refused a marriage proposal because they demanded dowry 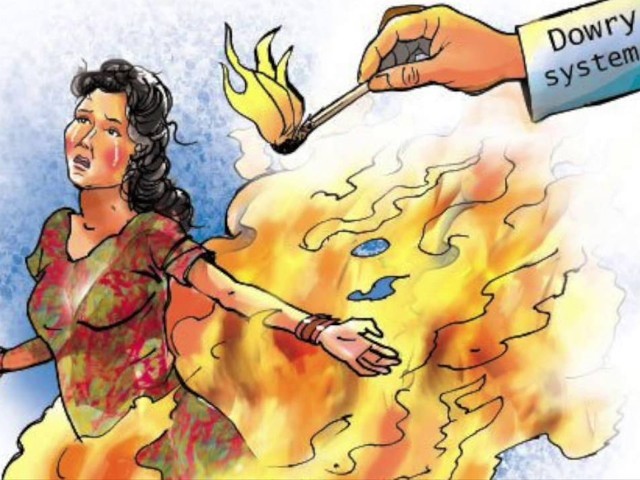 We seem to forget that we’re the once encouraging unfair demands. And when these demands are not met, the girls are set on fire. PHOTO: SCREENSHOT

The notion of dowry has always been rampant in Pakistani society. Ironically, it’s been adapted from Indian culture. Living together in the subcontinent encouraged us to adopt each other’s customs, and eventually, they became a part of ours. Now, we are so deep into this mixed culture that we have forgotten there’s a fine line between culture and religion. We fail to realise that dowry is not approbated by Islam.

When given the factual argument that Islam sets no example of dowry, the dowry mongers are left with no other argument. All they have to say is,

(When it comes to other things you don’t remember religion).

People refuse to support the idea of eradicating and uprooting this disease. You will hear all sorts of nasty comments and face personal attacks. But one must not give up on saving our society from this plague. We have to make them understand what ‘dowry’ actually is and the harm it causes.

While combating against the menace of dowry all my life, I too had to undergo an unfortunate incident of being approached for dowry myself.

It was around a year ago when I received a marriage proposal from an ‘educated and affluent’ family. My family ended up accepting the proposal based on their social standing. When the time came to decide a date for the engagement, the boy’s family demanded that a nikkah and a formal engagement ceremony should take place at the same time.

My mother was taken aback by this. She felt it was too soon for a nikkah so she spoke to the boy’s family and requested not to rush things. She suggested the following,

“The groom-to- be should take a bit of time in order to become financially stable and have a house in his name where he can keep our daughter. I think he should be allowed enough time so that he can become independent and support her. Once he is settled, we will happily set the date for the nikkah.”

The proposition made by my mother was one that’s usually made by parents who have daughters. However the in-laws were not only repelled by her request, but offended and decided to demand a dowry.

My mother-in-law-to-be was infuriated and said,

“You being the girl’s parents are not in a position to demand things. How could you even think of saying such a thing? We, the groom’s family, are the ones who can put forward such demands as per society’s norm. Why does my son need to be settled and stand up on his own feet when your daughter is supposed to bring a house and the entire setup in her dowry?”

My mother returned home astonished and narrated the entire episode to me. It reminded me of a scene from the Indian movie 2 States (2014). I was furious. So the next day I went to meet my mother-in-law-to-be or now not-to-be (she is the principal of a renowned private institution) and told her politely that she can keep her son because I am unable to pay his price. I made it clear that I am the kind of woman that believes dowry is a curse.

While walking out of her lavish house that day, I felt extremely proud of myself and knew that the mother must have pitied me for letting go of her gem of a son and thinking that no one would marry a girl like me. But I didn’t care.

Dowry is in no way related to the bride’s price but rather the ‘groom’s price’, dare I say.

Why is it the groom’s price? Because it’s a transaction. They believe it’s their right to make such a demand, but they need to understand that,

(You’re not giving your girl. In fact, they’re selling their son).

Gentlemen, want to know how much you’re worth? Dowry is your price.

So all you ladies who bring jahaiz to your in-laws can now announce the ownership of your husband since you paid the price.

During one of my Urdu lessons in high school, I remember coming across a statement from a pre-partition story in which the character of phupho, a confident educated working woman, broke all stereotypes. She stood up for herself and announced that she was marrying a man of her own choice, that too, without any dowry. When she was questioned, she said,

This one statement had such an impact on me that even at that tender age – when I had almost no knowledge of what dowry is and how marriages work – I had decided I will never take dowry.

While growing up, I observed my surroundings and saw my sisters and cousins getting married and taking whatever their parents could arrange for them in the name of dowry. I made peace with the fact that dowry is not an entirely negative thing if given within reasonable means and is affordable for the girl’s family.

But just recently, I started questioning the very thought that had made me concede with the practice of giving dowry. And then I came across an online post by a friend. He had written,

(Dowry is a curse. My brother didn’t receive any when he got married).

(Is his wife beautiful?)

(She was. The poor girl died because the stove exploded and she was burnt to death).

We give dowry and justify the concept by calling it ‘bridal gifts.’ These gifts include gold ornaments and furniture. Some exceed the limit and even engage in sending off their daughters with truckloads of a complete home setup. But no matter how much we justify the concept of ‘dowry’ and call it gifts, the idea remains the same. Hence, it should never be validated. We seem to forget that we’re the ones encouraging unfair demands. And when these demands are not met, girls are set on fire.

A poor man spends all his life collecting jahaiz for his daughters. If he fails to do so, his daughter is either rejected or ends up a spinster. This tragic tale doesn’t end here. She also becomes a victim of vicious mocks and taunts.

How difficult is it to understand that equating two different social classes in terms of affordability portrays a very bleak picture? One party might be in a position to afford dowry in millions while the other may not even be able to cater to the guests attending the wedding.

Why not try breaking the trend for once? Try saying no to dowry because every dowry demand is a death threat. Let’s quash the practice of giving dowry. Let’s set healthier trends for the sake of our relationships.

The author has studied BS Mass Communication. She is a social activist and a photographer based in Islamabad. She is a constant traveller and an avid reader. She tweets as @ZubariaJan (twitter.com/ZubariaJan)

“They started beating Aapi. Then they burnt her, right in front of my eyes”