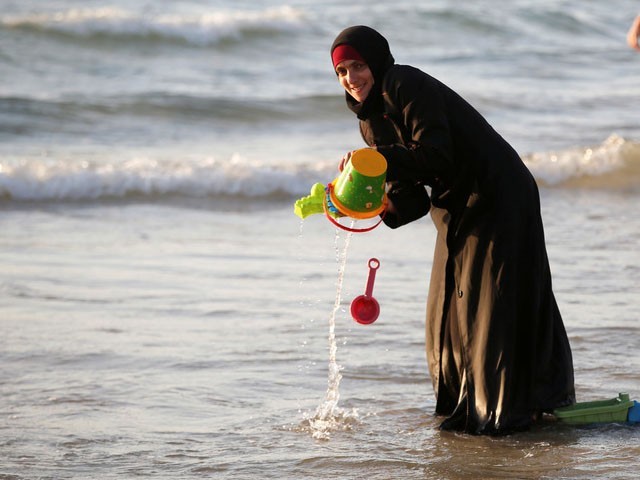 The garment is purely patriarchal, as much as we try to deny its origin. Yet, it is wrong to ban it. PHOTO: TWITTER

When I lived in Saudi Arabia, religious policing of women’s bodies was the norm. I remember a time when my mother and I were casually strolling down Suwaiket street – one of the most busiest and populated areas in downtown Al-Khobar – when we suddenly witnessed the religious police, most commonly referred to as ‘mutawa’ (or mutaween for plural) approach a young woman, and angrily demanded that she cover up, as she wore the abaya (full Islamic body covering), with the scarf resting loosely around her shoulders, her face and hair bare.

When the woman, who was too shocked to speak or didn’t comply right away, he proceeded to raise his cane, ready to strike her across the legs and lower back for not covering up. What happened next is unclear, as I was too young, and my parents made sure we cleared the scene as quickly as possible so that I wouldn’t be exposed to such vulgarity.

This wasn’t the first time I’d witnessed or heard from others about incidences where these mutaween approached women, sometimes striking them first before demanding that they cover up. The only time women were allowed to uncover was either at home or within the confines of the compounds that they lived in – a town within a town, where women were allowed certain freedoms and privileges to do and dress as they pleased.

However, this was two decades ago. And in these two decades I have come to realise that the policing of women’s bodies is not only limited to places like Saudi Arabia; a reality that I have finally come to terms with, as for the longest time I believed women in the west possessed full liberation and rights over pretty much everything, including their own bodies.

And while this is true for the most part, things haven’t been as affable for Muslim women within Europe, more specifically France, over the past decade. Thus, my vision of women’s liberation in the west was quickly shattered when I learned about the French ban on the wearing of ‘conspicuous religious symbols’ in 2004, and further in 2010 when the ban was decriminalised through the Senate of France to specifically include the Muslim face veil, commonly known as the niqab.

And just when we think that France will give this whole ‘banning’ business a rest, it decides to go ahead and ban something else: the “burkini” – or, to put it more precisely, disallowing women to wear swimsuits that pretty much resemble a wetsuit. As a matter of fact, to even call the suit a ‘burkini’ is highly erroneous, as it looks nothing like a burka, which is supposed to be loose and flowy.

If you’ve seen pictures of women wearing the burkini, you will realise that it is quite form fitting – an image that would most likely be deemed un-Islamic and unacceptable by many Muslim clerics. Yet, France seems to have a huge problem with this because it happens to be a garment that stems out of Islam – the very religion to which they’ve been the recent targets of terrorist attacks.

What the French don’t realise, however, is that this so-called burkini has no correlation to those attacks, nor should all Muslims be painted as raging terrorists, ready to blow themselves up in the name of Islam. This is anti-Muslim bigotry at its worst, and it is not only a vilification of human rights, but is also extremely undemocratic; especially when democracy is a value that the country seems to proudly uphold.

Yet, how can France consider itself a democracy when just a few days ago, on a crowded beach in the city of Nice, armed police forced a Muslim woman, wearing this so-called burkini, to strip it off. These policemen are no different than the mutaween who force women to cover their hair/face in places within Saudi Arabia. It is just as oppressive, demeaning, and an encroachment on the rights of women who want to dress as they please in clothes that they feel most comfortable in. And it may even perhaps be a choice; women may choose to wear the conservative swimsuit for many reasons that are not even religious in the first place.

Reasons may simply include safeguarding from the sun or not feeling comfortable showing their bodily ‘flaws.’ Or, it could be enforced. Whatever the reason, the wetsuit just makes it that much more easier for, and instils confidence in, women to get out of their homes and enjoy the outdoors.

Mind you, these are women who may not even be allowed to leave their homes without a male chaperone in the first place. These may be women who have been forced to wear the headscarf, of course by the males in their family, and going to the beach, despite being covered from head to toe, may serve as a sense of liberation and entitlement for them – a luxury that they rarely get a chance to indulge in.

So, why take this privilege away from these women? Why make an already seemingly oppressed woman even more oppressed? What good will it serve these women, when they should instead be praised for having the guts to partake in a public activity that they would otherwise never be allowed to partake in had the burkini never existed? I mean wasn’t this the reason why the burkini was invented in the first place, as Aheda Zanetti, the creator of the swimsuit says,

“When I invented the burkini in early 2004, it was to give women freedom, not to take it away.”

I admit, I personally am not an advocate of women’s garments that include wearing the veil and a headscarf, but I would certainly never ban a woman from wanting to wear it. I do not have the right to impose my beliefs on someone else. At the same time, I am not a fan of the burkini either – I actually wouldn’t even call it that, because to me it is clothing that stems out of oppressive forces. Most Muslim women wear this garment, because it covers their body, confirming their piousness and virtue in the eyes of the men who have enforced it on them.

The garment is purely patriarchal, as much as we try to deny its origin. Yet, it is wrong to ban it. French men have no right to tell Muslim women that they are being oppressed by wearing this specific garment, when they, too, are acting no different in their tyrannical approaches. It is oppression when men force women to veil. And it is also oppression when men force women to un-veil. Both times, patriarchy has taken full precedence and it’s time that men stayed out of women’s affairs, and just let them be.

At the same time – and, here I will be the devil’s advocate – I also feel that it is unfair that so much outrage is directed towards the burkini ban, when Muslim and foreign women alike, in ultra-orthodox Islamic nations like Saudi Arabia and Afghanistan, are forced, punished, and demeaned for showing their hair or uncovering parts of their body, i.e. arms and legs, that they are not supposed to reveal, in public. I wish we would raise our voices against this forced oppression as well, because it is oppression as much as we try to deny it. We need to condemn countries like Saudi Arabia for publicly hitting women, and humiliating them, just like I had witnessed all those years ago for not covering up. We need to raise our voices against enforcement of the headscarf/face veil on women, just like how we are condemning the French for being hypocritical and tyrannical in their enforcement of the ban.

Nevertheless, the most distressing thing about this whole ordeal is that France will respond to the outrage on the burkini ban, and even go as far as to overturn it. And the most recent news on the issue has revealed that France’s highest court has actually overturned it. Yet, chances of overturning the enforcement of the head covering/face veil will never see the light of day in the orthodox Islamic countries in the east. This is where the root of the problem lies. This is why anti-Muslim bigotry exists, and keeps flourishing – and this why women, and their bodies, will always be targeted and objectified time and time again.

Perhaps it’s time we directed our rage where it should have been directed a very, very long time ago. Because if we had, maybe, just maybe, we wouldn’t have to deal with outlandish issues such as the burkini ban in the first place. If we sincerely tackled the issues that our women are constantly suffering from on a daily basis, in places like Saudi Arabia, Afghanistan, Pakistan, etc perhaps things would have been very different for them in the west.

A woman’s clothing should never be banned, nor should any article of clothing ever be enforced on her. It’s time we realised this hypocrisy within us and find ways to rectify it. After all, change begins at home, doesn’t it?