Why are we allowing the murder of animals? 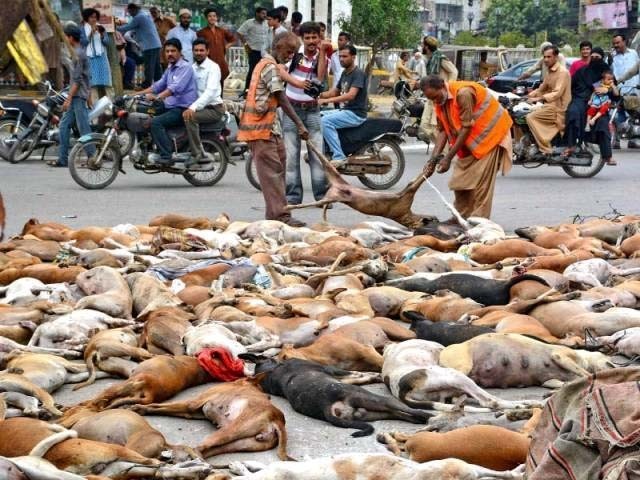 Around 800 stray dogs were poisoned by Karachi Metropolitan Corporation, which was criticised by animal rights activists and was termed as violation of animal rights. PHOTO:FILE

To anyone who grew up in Pakistan, such as myself, it has always been taken for granted that animals are inherently ‘lower on the food chain’, so to speak. They have never been given much importance, and in the grand scheme of things, no one thinks of their rights.

While humans have their own plights, as Pakistan can be a laborious and challenging place to reside in, animals go through the same, and often worse, struggles than we do. They do not have the capability to speak up for themselves, and so their circumstances are often not considered

One such animal, that I am sure most of you have heard about, is Kaavan, the 31-year-old elephant and his 28 year ordeal of being chained at the Karachi zoo. We can only hope that he will recover from his psychological and physical damage because of his traumatic experience.

Although this animal survived, there are millions more who fall victim to the harsh reality of Pakistan; the fact that not many care about animals and not all cases of animal cruelty are documented or addressed. Dogs, cats, cows, donkeys — animals that people abroad can only find in homes, shelters, petting zoos, or farms — are roaming the streets, some born there, some abandoned. Ordinarily they are seen with their ribs showing through their lank fur; their sad eyes and lolling tongues are commonplace in this city.

Donkeys, especially, suffer on a day-to-day basis. Although people do not usually pay these gentle, hardworking creatures any mind, I know I cannot be the only one who has noticed the cumbersome load they carry. Donkeys live and breathe just as much as anyone of us, and no creature was built to perpetually carry such heavy load. There have been numerous cases of donkeys dying on the spot. They face other dire circumstances.

It is sometimes a tradition to smear henna on the fur of donkeys. The harmful chemicals present in the henna are potentially fatal for animal skin, and can seep through the fur into their sensitive hide, thus poisoning them and taking their lives. I am also compelled to mention the similar use of coloured dye on chicks. The dyes are the reason those innocent chicks, that children buy excitedly from some street vendors, perish so abruptly. This reduces their already short lifespan, leaving them to expire within a few days.

Let me shed light on another situation which is truly barbaric. Just last year, Karachi University left out meat laced with poison around campus for the starving stray dogs that had taken residence there. Subsequently, about a hundred dogs died before the citizens of Karachi decided to take action and remove the strays from the grounds. It does not stop there, because 2015 was also the year KMC started the mass murder of every stray dog in the city. Yes, I will call it murder. Thousands of dogs were mercilessly shot, with their blood staining the streets. Dog owners such as myself, became afraid to let their dogs out of the house, for fear that they too might suffer this terrible fate.

The horrible reality is that it is still continuing — just last week hundreds of dogs were poisoned by the Karachi authorities. The authorities have claimed to be solving the issue of rabid dogs, but is this really the answer?

Even in our neighbouring countries, like Nepal and India, who have a population of strays as large as ours; they have set up sterilisation and immunisation centres for stray dogs. Why are dogs being killed for a disease they cannot control, while thieves, cold-blooded murderers, and rapists are given a few years of jail time at most for their intentional, premeditated atrocities? They should be treated, like all patients and victims of illnesses are.

Chickens, cows, and goats are cramped in small cages only to await their bitter fate at the hands of the very same man who is currently butchering their sibling. It really disgusts me how people feel that animals, just because they cannot speak, or because they do not have opposable thumbs, do not have feelings or thoughts. Anyone who believes that has clearly never heard a female dog cry for her dead child, or heard chicks creating a pandemonium after being taken away from their mothers, never looked into the sorrowful eyes of a goat as it watched its companion being slaughtered, or gazed at the genuine love in the eyes of a loyal pet or an attached stray.

Humans have no right to decide whose life is more important. We are not as important or indispensable as we think we are, and it is time to let go of our ego and show a bit of empathy.

The author is an A level student and an avid writer. She is passionate about animals, photography, and social issues.