Why should I live in Pakistan? 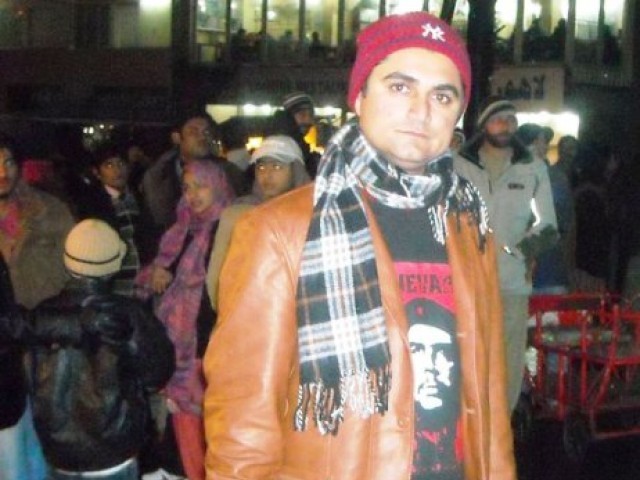 What Wali did wasn’t something extraordinarily brave.

It’s not okay when you switch on the TV to find out that someone you know has become a victim of target killing. It’s not okay to see that because it leaves you with a hundred unanswered questions about why you are still living in this country.

That’s how I felt yesterday when I heard the news that Wali Khan Babar, a fellow reporter and my senior in university, was shot dead in an incident of target killing.

As the news kept flashing images of him over and over again, I was reminded of him – clad in huge sunglasses and a red T-shirt – around the corridors of my department. It’s hard to know that someone I laughed with was killed in such a way.

Although I am not in a position to judge him professionally, I can say that he was definitely a funny and caring guy.

What he did wasn’t something extraordinarily brave – he had a normal job as a reasonable journalist. But what he received in return is what is extraordinary – death.

In my opinion, this country is not worth living in anymore because Wali’s death speaks volumes of how Pakistan has become an out-dated noun.

In international relations we learn that the basic unit of the whole system is a country which comprises nation and state.

Nation denotes a people who are believed to or deemed to share common customs, origins, and history; and state refers to the set of governing and supportive institutions that have sovereignty over a definite territory and population.

However, in Pakistan one gets killed for belonging to a certain ethnicity, for speaking your mind about religion, for being poor, for being honest, for being rational and with all that happening there is no writ of the government.

How can you live in a county when it’s not even a country anymore?

I chose to stay in Pakistan while my friends moved abroad. I made it my home because I have my people here.

But, I feel, that maybe I made the wrong choice. I ask myself, why I should stay here now, when the state cannot even guarantee the security of the people I know?