How can France assume the basis of our choices? 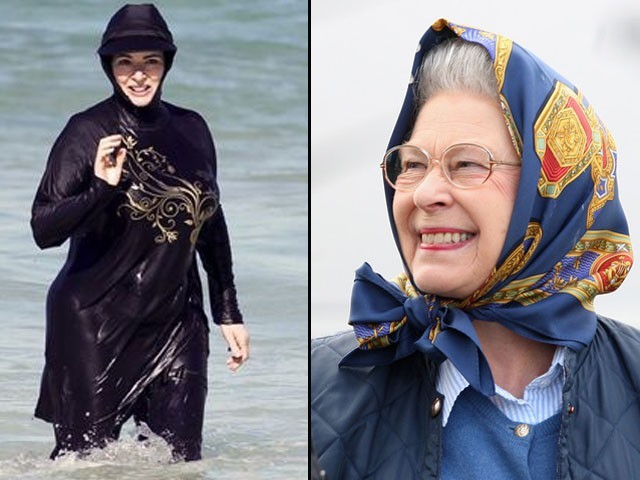 Would the French police insist she removes it lest the public view it as a declaration of her Muslim belief?

The dupatta has been around in our part of the world for thousands of years. The word itself is of Sanskrit origin, ‘du’ meaning ‘two’ and ‘patta’ referring to a strip of cloth. In ancient times it was worn as a symbol of modesty as part of an outfit that was comprised of three pieces and, as centuries passed, it became part of the cultural, religious norms in this region – not just for Muslims but also Hindus and Sikhs who cover their heads when walking into a religious building.

These days it is worn by many young girls as more of a decorative element than a religious requirement but it is still a piece of cloth that completes a shalwar kameez beautifully.

There is also a huge part of the female population that uses some variation of the dupatta to cover their heads for religious purposes. In the last few days, I have been more conscious than ever before of the different types of head coverings the women in Karachi wear, following the recent events in France banning the burkini.

Karachi is ethnically diverse with large groups of Muhajirs, Sindhis, Pakhtuns, Punjabis, Balochis, Bohris, Ismailis, etc. as well as thousands of Afghanis and Iranians. Yet all those that have settled here are considered Pakistani if they choose to be – and considering the form of covering can vary from a simple dupatta to a hijab, shayla, khimar, chadar, niqab or burka – many of these ladies may as well not bother applying for a French visit visa unless they plan on putting their beliefs aside in favour of climbing the Eiffel Tower.

The extension of the recent ban in certain French coastal cities on religious beachwear such as the burkini to women wearing long clothes and a headscarf makes me wonder: what if the next time the Queen of England walks onto a French beach in a long skirt and a Hermès headscarf? (Which she has been officially photographed wearing on many occasions). Would the French police insist she removes it lest the public view it as a declaration of her Muslim belief?

What if the next time the Queen of England walks onto a French beach in a long skirt and a Hermès headscarf?
Photo: Pinterest

Or when Nigella Lawson, Britain’s domestic goddess, next decides to go for a swim in the South of France wearing a burkini, will she be fined for slighting French nerves? Some of you might recall she wore a burkini whilst with Mr Saatchi a few years ago citing that he preferred women with fair, alabaster skin.

Some of you might recall she wore a burkini whilst with Mr Saatchi a few years ago citing that he preferred women with fair, alabaster skin.
www.matrixpictures.co.uk

Two years ago, I recall snorkelling in the Seychelles – not realising how strong the sun was and getting burnt quite badly. The severity of the burns meant that the Emirates Airline crew had to provide me with burn medication from the first aid kit to give me some modicum of comfort. I couldn’t lean back for the duration of the flight. I also clearly recall one of the crew members jokingly suggested I carry a burkini the next time considering I have such sensitive skin.

Clearly snorkelling in France is not an option for me now.

I think it’s safe to say that to most observers, Queen Elizabeth, Nigella Lawson and I would, on the face of it, seem quite capable of making our own decisions. Therefore, how can anyone assume that our choice of beach coverage is a pronouncement of our religious belief or for that matter, how can the public know what drives our choices? In any case, how is insisting that a woman cannot wear a certain item of clothing any less sexist than insisting that she must wear one? In my view both are equally bad.

I mean – how do you know the religion of beach ware? Is there an "extreme vetting" process for fabric?

They can't even swim with an outfit of their choosing. And that's in #France, land of purported "liberté, égalité, fraternité." #burkini

When armed police takes to a French beach to force a woman to disrobe, it makes you wonder what’s more barbaric; a policeman threatening to fine/beat/jail a woman because she is under clothed or, a policeman resorting to force to make a woman take some clothes off. I cannot understand why women can’t be left alone to decide what to wear. We don’t tell overweight men not to wear Speedos – although the assault on one’s eyes can be extremely offensive in certain cases!

Proposal: all the men calling a burkini a sectarian monster should be subjected to Brazil bikini waxes every week till the end of summer.

The recent spate of events following the burkini ban in coastal cities in France stems from the concept of Laïcité – a core concept in the French constitution, which formally states that France is a secular republic. This concept relies on the division between private life and the public sphere.

Laïcité has been around since 1905 and by and large, head scarves and head coverings were tolerated until approximately three decades ago when the female Muslim covering started to become a political issue, just around the time when certain events globally meant people started to assume Islam was synonymous with terror – which it most certainly is not.

“France does not lock away a woman’s body,” stated right wing leader Marine Le Pen. “This is the soul of France that is in question.”

Somehow I find it hard to believe that building a sandcastle with two strips of band aid covering your private parts is any more soul enhancing than building one wearing a scarf, long shirt and leggings.

The French banned the hijab and other ‘in your face’ religious items (for example the Jewish kippah and large Christian crosses) over a decade ago and the face veil in public a few years later. Now the burkini is out too.

There is a school of thought out there that believes that the French burkini ban is less about religion and more about what it means to be French. I’m certainly not qualified to comment on that but I’m sure it means more than being able eat and drink crazily without putting on weight or managing to look chic without any effort.

Social scientists believe that the French issue with the veil is no longer just about religious differences, but about France’s inability to accept that people not of French descent can also have a French identity. The French are now a multicultural people with different ‘traditions’ in play. Instead of imposing restrictions, wouldn’t a more relaxed definition of läicité be the more ‘chic’ approach?

The author is a Chartered Accountant and an International Mergers & Acquisitions specialist with experience of business that includes living and working in Europe, the Far East, the US and Dubai. Soon after becoming a Global Partner at PricewaterHouse Coopers a few years ago, she decided to change careers and use her experience to help people realise their potential by becoming an executive coach. She is a certified Evolved Life Coach, trained in neural and behavioural techniques such as neuro-linguistic programming, stress biofeedback, hypnosis and time paradigm techniques.

Please don’t let the world say ‘I told you so’, Britain!

It’s good to be back…