France had every right to ban the burkini – Their country, their rules 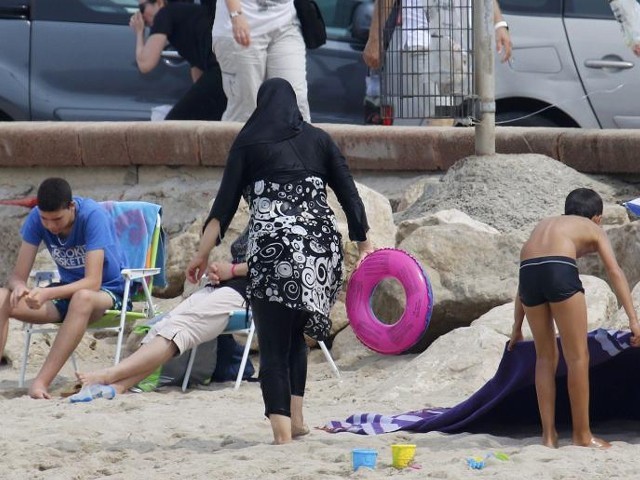 A Muslim woman wears a burkini, a swimsuit that leaves only the face, hands and feet exposed, on a beach in Marseille, France, August 17, 2016. PHOTO: REUTERS

Women and their clothing have long been a matter of contention in society. Men have always regarded the female body as a symbol of social honour and have sought to control the way women dress and the way they carry themselves.

In the modern era, it is only in the last half century or so that women have really been able to get some measure of control over their own choices, and that too only in some parts of the world. In most societies, the patriarchal order still dominates.

It has been a long and hard fought struggle for women to break free from the patriarchal stranglehold on their individuality and the west has done an excellent job of enfranchising its women.

Across the western world, women today are on an equal footing with men. Gender inequality and discrimination have steadily ebbed and women are able to be themselves, unhindered by the disapproving male glare.

This western model has also proved to be an inspiration to women in other countries and has laid the foundation for more women getting educated and employed and being able to make their voices heard.

France, with its secular and liberal values, has been at the forefront of propagating women’s liberation. The French hold these ideals dear and are determined to continue the progress they’ve made. There is a certain identity, a certain belief system that is associated with being French. Liberty, equality, and fraternity are enshrined in the French mind-set and are the founding values of the Republic.

France also has relatively more cultural unity. Unlike countries like the United States, Canada, or even India, France has a largely homogenous identity. It has traditionally not been a melting pot of cultures and influences. It is unapologetic about being French and wants to ensure that it remains that way.

Though France has opened itself to immigrants, it is also very clear that it expects immigrants to assimilate into the French way of life. It is perfectly fair for France to expect that from newcomers. France may have had its selfish reasons for accepting immigrants, but at least economic immigrants have the opportunity to become citizens and settle there permanently.

Many Middle Eastern countries use expatriate labour for their growth, but throw them out the moment their contracts get over. Isn’t it outrageous that people who toil their entire lives in the UAE have absolutely no chance to become Emiratis? The same is the story in Qatar, Saudi Arabia and many other countries. Forget about non-Muslims, but even Muslims from Pakistan or Bangladesh cannot ever dream of becoming nationals of these countries.

Why doesn’t that raise eyebrows?

You may argue that Dubai permits bikinis, alcohol, and pork, but remember it only accepts you as a visitor. Kissing in public can still land you in prison, as many westerners have found out. It is clearly not willing to compromise on its inherent character.

The fact that the French courts have overturned the ban also points to the evolved sense of personal liberty and tolerance that France possesses. All the outrage could be channelled through a judicial process that took a humanitarian view of the situation. The Dutch woman who was imprisoned for reporting her rape in Qatar had no recourse to a higher court to seek enlightened justice. The couple arrested for kissing in Dubai had no such luxury either. This clearly demonstrates how far ahead Europe is in matters of personal liberty and why left wing liberals ought to direct their outrage at the autocratic Gulf kingdoms instead.

If globalisation and the virtues of pluralism are the reasons why France is being urged to become an inclusive melting pot, then shouldn’t the same standards be applied to other countries as well?

Therefore, if the world is not pressing the rich Gulf kingdoms to materially open up their societies out of respect for their way of life, then the French also do not owe it to anybody to embrace unfettered multicultural practices or accept values that are alien to them. The fact that they have opened their country to outsiders and allow them to become French speaks volumes for their humanitarianism.

That’s the context through which France’s efforts to first curb the hijab, and more recently the burkini, must be viewed. In the French mindset, these garments have absolutely no place in their egalitarian and progressive society and are symbols of the regressive mind-set that they fought so hard to overcome.

It is ironic that the burkini wasn’t invented in a Muslim country. It was actually created in Australia, by a woman. It is sad that it wasn’t a Muslim man, in a Muslim country, who thought about making things a little more comfortable for his female compatriots. They have apparently been content watching their women lug around in inconvenient layers of clothes, even while at leisure.

The burkini is definitely a step up from the burqa and the niqab, but it is still anachronistic. It reduces the physical baggage that a woman is compelled to carry, but it in no way diminishes the ideological baggage that she must lug each time she visits the beach.

An important point to remember is that banning burkinis does not amount to mandating the wearing of bikinis. Women who are uncomfortable wearing bikinis would remain free to wear many other types of less revealing clothing to the beach. T-shirts, shorts, capris, sarongs that will remain perfectly legitimate beachwear.

While Muslim men have complete freedom to walk bare-chested wherever they choose, they impose severe restrictions on their women. From Malaysia to Morocco and beyond, men can enjoy the cool breeze on their skins, while every inch of the woman’s skin must be hidden under the oppressive fabric.

If a young woman is brought up to believe that her body is the repository of family and community honour, obviously she will grow up to be uncomfortable with the idea of not keeping it covered up at all times. As that woman steps out of the house, she may believe that wearing the hijab is her choice. However, that choice is merely an illusion. The reality is that she has been conditioned to believe that and her decision is really not autonomous.

This hypocrisy, discrimination and injustice should be unacceptable in this day and age. We must celebrate the fact that the French have had the courage to speak up against it and do something to change things, at least in their country.

Critics of the burkini ban say that that forcing women to shed their burkinis is as bad as forcing them to wear burqas. This is a disingenuous argument. It is important to remember that this ban isn’t directed at women. It is actually meant to strike a blow at the patriarchal oppression of women. France wants no part in this systematic inequality and is also wary of the influence that these orthodox attitudes can have in pushing their own society back in time. Thus it is asking Muslims in the country to reform. If they want to continue to be a part of the French society, then they must adopt more progressive and liberal values.

Many liberals who oppose this ban are unwittingly doing a great disservice to Muslim women all over the world. They are trotting out culture, heritage, tradition, and even biology as excuses for not trying to fight the status quo. These same arguments have been used to justify slavery, segregation, and many other social ills over the centuries. Mere lip service to women’s equality is not enough. Stern action must accompany the rhetoric.

Radical social reform can be painful. There is churn and resentment when a new movement starts and sometimes, hard-line measures are required to push that reform through. However, it is important to keep the long-term objective in mind when viewing the short-term impact. If the French can successfully relegate the burqa and the burkini to the dustbin of history within their country, imagine the precedent it would set for other societies to overcome the systemic and historic oppression of women.