I’d wear the burkini over a bikini any day 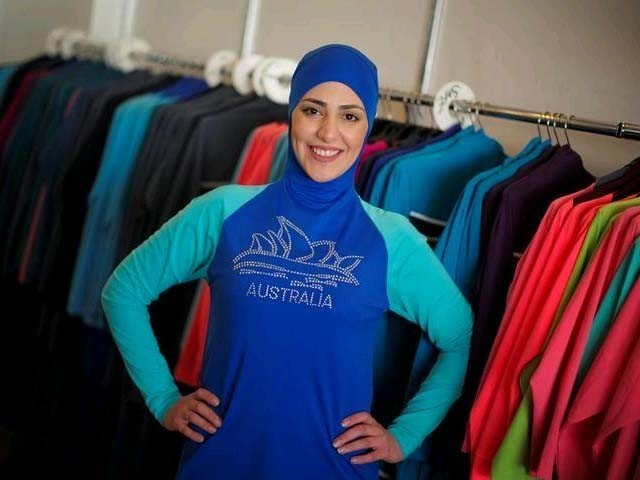 The women’s rights minister in France, Laurence Rossignol, thinks that burkinis are “profoundly archaic”. Who wouldn’t agree with me, if I said that she is no different than any rigidly religious person who criticises a woman for what she wears. It is a woman’s own choice and no one gets to make that decision for us.

I am a Muslim but perhaps not the ‘best’ practising Muslim. Religion usually doesn’t play a very big role in my decisions (fellow Muslims please don’t jump to conclusion for my statement, but I would rather be honest than be a hypocrite!). So anything that I say or do is from a fairly secular point of view. Here is the reason why I would rather wear a burkini than a bikini or bathing suit.

About 15 months ago we enrolled our six month old daughter for swimming lessons. I had to join her in the pool as well so I donned my bathing suit which covered half of my thighs but had a massive slit at the back. I wore that for a few months, mostly in the presence of female swimmers and even then I was always conscious about how I looked. Living in a Western country, skimpy clothing is not shocking for me. It’s not even that I dress conservatively, I usually don’t. It’s just that when a person dives in water everything becomes more explicit (if this wasn’t true, there won’t be any rain scenes in desi movies!)

Instead of enjoying the lessons to their fullest, I spent time worrying and thinking that I looked grotesque. I can only imagine how some women, who wouldn’t mind some attention from the opposite gender, and wear skimpy swimwear must feel when they are surrounded by men. I felt like I was on display and in a very bad way. I know for a fact that every woman is conscious about her looks, even the most beautiful ones.

I have a toddler and with that I have scars to remind me of my beautiful pregnancy. I don’t regret having these stretch marks but I don’t love them either. Several times I have thought of going for pricey procedures to get rid of these marks but each time I conclude that I would feel better if I spent my hard-earned money on my daughter or saved it for the future. I’m conscious about them and would try to hide these marks like any other women; hence a bikini won’t be of any help.

Also, as if it wasn’t difficult enough to make our faces look presentable, we are now expected to put our bodies on display. And it isn’t easy. It is time-consuming and sometimes expensive as well. I want to swim regularly, but I don’t want to worry about my body hair every day. I don’t even want to spend time on waxing and shaving and scrubbing my body parts before going on a holiday either.

Being a mother, I don’t have time for beauty treatments; I sometimes can’t even manage to comb my hair properly. I am sure all mothers can relate to this feeling of juggling several things at a time. So when we are preparing for holidays, we are mostly concerned about that one thing we will forget to pack and will be missed the most by our child. Looking good is not a priority at all. No one looks perfect all the time and no one has the time to worry about looking perfect all the time. The burkini, in my opinion, will hide a woman’s flaws (if one likes to think of these natural aspects as flaws). And contrary to popular belief, I think it will give me confidence to go into water without worrying about looking brash.

So thank you France for reminding me of this wonderful creation by the mankind. I had almost forgotten about it but the oh-so progressive country brought burkinis to the limelight again. Now all I need to do is to decide which one should I go for, can you all please help me decide?