The faults in PEMRA’s decisions 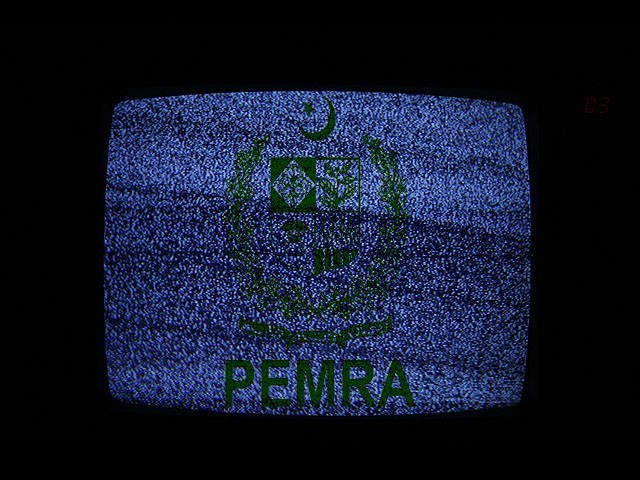 In the past year or so alone, PEMRA has managed to take fairly hare-brained decisions when it comes to issuing notices and banning programs.

Pakistan Electronic Media Regulation Authority – or PEMRA as we know it – is the body that aims to regulate and monitor content released in Pakistan on television and broadcasting networks.

This is their mandate:

1. Improve the standards of information, education and entertainment;

3. Facilitate the devolution of responsibility and power to the grass roots by improving the access of the people to mass media at the local and community level;

4. Ensure accountability, transparency and good governance by optimisation of the free flow of information.

Here’s what the problem is:

In the past year or so alone, PEMRA has managed to take fairly hare-brained decisions when it comes to issuing notices and banning programs. PEMRA’s inability speaks more about Pakistan’s institutions being weak in the face of religious fundamentalism and security establishment – rather than the regulation and standardisation of content in Pakistan. In a country where a cybercrime bill can have me arrested for this blog – it is a small wonder that PEMRA is issuing ridiculous show-cause notices to dramas like Udaari.

In a country that suffers from a population explosion and a severe lack of awareness about reproductive health – PEMRA banned a condom ad. It is pertinent to mention that the percentage of HIV/AIDS in Pakistan is rising by 11%. In the rest of the world, where proactive measures about reproductive health (such as awareness campaigns and supply of hormonal and barrier contraceptives) are being taken – Pakistan’s statistics are abysmal. The best and the easiest way to educate the Pakistani man and woman are via television ads and entertainment based mediums. Yet PEMRA banned the condom ad. I hope it will also take responsibility when the rate of HIV/AIDS rises even more next year.

In a country where child sexual abuse barely even has a separate and articulate clause under the Pakistan Penal Code, PEMRA issued a show-cause notice to Udaari, a Hum TV play that highlights such issues among others. Masterfully and realistically written, Udaari displayed the plight of a little girl who is sexually assualted by her stepfather and everyone in Pakistan who clings to false notions of honour and respect went into panic mode.

‘How could they show such a thing?’ they asked.

On TV? Oh the horror!

Just a few months ago, a child abuse scandal in Kasur was unearthed. In 2016, it was said that almost ten cases of child abuse are recorded every day in Pakistan.

Every day. Let that sink in.

Funnily enough, credible ‘journalists’ and ‘experts’ get away with saying all kinds of nonsense on prime time television without any question placed on their intentions or show-cause notices at all. Frivolous example as it may be, Mr Arif Nizami went into lengthy details about Reham Khan’s divorce with her first husband on a TV program. What I can only call slander was kosher for many experts and for torch-bearers of family values – the same people who were highly offended when Udaari wanted to highlight the issues of child sexual abuse in a fictional manner.

Similar patriots and religious rightists were also silent (or vehemently nodding their heads in agreement, rather) when a known religious figure was ranting absolutely pointlessly about a girl playing cricket. PEMRA found nothing wrong with his bizarre and fairly perverse way of objectifying a sportsperson. PEMRA also couldn’t find anything wrong with the same religious rightist calling to cull anyone who disagreed with him or his views – asking them to make their videos and share on social media so a mob could lynch them.

Another religious figure was given plenty of airtime by the media who heads a blacklisted group that is deemed a terrorist set up by the State Department of the United States. I’m not sure about you guys, but I think this qualifies as putting your foreign policy in serious jeopardy.

Actor Hamza Ali Abbasi was banned from hosting his Ramazan show when he wanted to ask a few controversial questions from religious scholars. A fairly grey decision, considering Abbasi was getting death threats from different factions of the religious right that he so often happily panders to himself – but it just goes to show you how upside down our sense of morality really is.

And no mention of Ramazan transmission is complete without Aamir Liaquat. And PEMRA was probably thinking the same thing when Amir Liaquat was banned for three days for something as silly as making funny faces when someone was singing. I still find it strange that Aamir Liaquat has said far more inflammatory statements for which he has received neither notices nor bans – but was banned for making a funny face. That turned into a viral meme that entertained many on social media.

Like most Pakistanis, I, too, am at a loss at the broad, broad spectrum of what PEMRA deems as worthy and unworthy. Slander against Reham Khan is okay. Objectifying women playing sports is okay. All kinds of ableism, body shaming, s***-shaming, sexist, racist, misogynist jokes on ‘current affairs’ programs are okay. But speaking out about sexual abuse is not.

Waging jihad in Kashmir is okay. Asking about different sects of Muslims is not.

Making fun of Taher Shah is okay. Forcing someone to eat mangoes is okay. Making a funny face is not.

Misogynistic, abuse-glorifying dramas where women are told that their entire self-worth is based on who they marry are okay. A woman who decides to move out of an abusive marriage for the safety of her child is not.

I’m confused, PEMRA is confused – perhaps Pakistan is confused. That is the only explanation I have for just how arbitrary and illogical PEMRA tends to be.