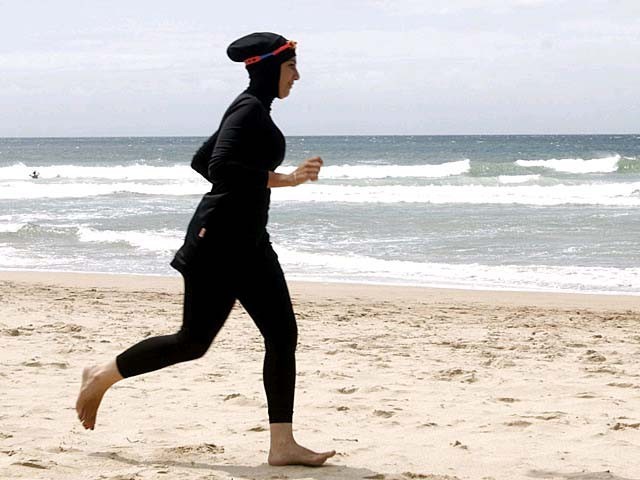 The burkini is struggling for acceptance within the well-defined framework of French secularism and gender equality. Banning the hybrid garment on several French beaches has rekindled a 27-year-old simmering debate in which the concerned parties have been broadcasting perceived victimisation on different wavelengths.

Since 2015, France has suffered 237 deaths in indiscriminate Islamist terrorist attacks, culminating in an 84-year-old priest’s throat being slit during a church service and recorded on video. The resulting shock and horror shook French Muslims out of their moral complacence and had their Imams forcefully dissociating their faith community from terrorists and terrorism. French Muslims were significantly present at Catholic memorial masses held for the slain priest. This reaction did not go un-appreciated by their fellow citizens.

Yet, good will has been trounced once again to ensure that the prevailing perception of bitterness receives its fodder. In the wake of Father Jacques Hamel’s assassination, there were expectations that French Muslims would keep a low profile and let everybody get on with their holidays.

Alas, the bid by Muslim ladies in burkinis to join their co-citizens on the beaches was either poorly timed or mischievously inspired. It has certainly succeeded in provoking a reaction which is liable to strengthen no-go areas and mind-sets.

Just four weeks after the Bastille Day truck massacre in Nice, the presence of Burkinis on its beaches was perceived as flaunting a faith community’s cultural exclusiveness and taunting France with its own liberalism while the nation was still in shock. So far, nine cities and towns have banned the burkini on their beaches, citing it as a threat to French secularism and public hygiene. Although any such interdiction may be democratically questionable, the emergence of the burkini is even more interesting.

After all, for around 1400 years since the birth of Islam, there was no burkini. Muslim women went to the seaside for a stroll, sometimes wading into the water fully clothed but never caused a raised eyebrow. They did wear the burqa, though.

Mostly worn by Muslim women, a burqa is full body coverage which may or may not hide the face. A bikini is a two piece swimsuit. Some Muslim women, unwilling to expose their bodies to public view, wear a shortened version of the burqa which is like a full-length wet-suit with a hood. It is called a burkini and can be bought on Amazon from approximately $31.49 dollars and up.

At the risk of digressing, this writer does feel compelled to express his surprise at the disproportionate modesty of bare-chested males in Bermuda shorts escorting their ladies in burkinis.

In 2009, in France, a Muslim woman was barred from entering a swimming pool in a burkini on hygienic grounds. It would have been wiser for a community leader to have approached the municipal authorities to present the case that Muslim women were unable to go to a swimming pool during mixed timings and ask for separate women’s hour. Needless to say, it would have been rejected on the grounds of gender segregation, but at least an eventual Supreme Court ruling would have ensured against any lingering resentment.

Instead, this year’s provocation — as it is perceived to be — has succeeded in further isolating French Muslims from their fellow citizens in a dangerous space.

It is always this isolated space that provides passive support to different stages and manifestations of political violence.

And it started 27 years ago with the hijab, known as l’affaire du foulard in France.

In 1989, citing a French law against ostentatious religious symbols in secular educational institutions, a high school principal in Creil, near Paris, expelled three schoolgirls for wearing the hijab. L’affaire du foulard caused furore for the next 15 years, from the streets, to liberal cafés to the Supreme Court. The media had a field day. During this period, the French felt their secularism brazenly violated by a minority faith community; whereas the latter felt they were being victimised for their choice of dress. Yet the question of what led these three schoolgirls to wear the hijab and the principal to expel them remains a dusty puzzle.

Finally, in 2004, the hijab headscarf was officially banned in all French schools.

But the damage had been done.

In 15 years, no bigot on either side had been able to see a non-confrontational way out of the deadlock. In response to the ban in schools, thousands of Muslim women chose to wear the hijab to proclaim a fundamental right. A community already struggling hard with integration found itself further alienated and ripe for the whispers that sought to keep it thus.

And after a year of horrific bloodletting, instead of dousing communal polemics by socialising on the beaches, the burkini has reignited communal polemics, obscuring the elegance of arguments in favour of the controversial garment. Artfully inserted as a test-case of applied liberalism, the controversial world-views at the heart of the issue remain sublimely self-righteous and, as such, non-negotiable.

While one side is now convinced of treason, the other cries discrimination.

The burkini on French beaches is viewed as an open challenge by the French.

The ban is interpreted by law-abiding Muslims as an institutional reprisal for the heinous acts of a few.

On this issue, the liberal argument has reached its watershed and liberals find themselves stuck between a rock and hard place.

With neither side willing to concede an inch, it’s a lose-lose situation for French citizens of all communities.