Series 6 Was I a threat? Part 1 “Please don’t dishonour us by going out all the time.” 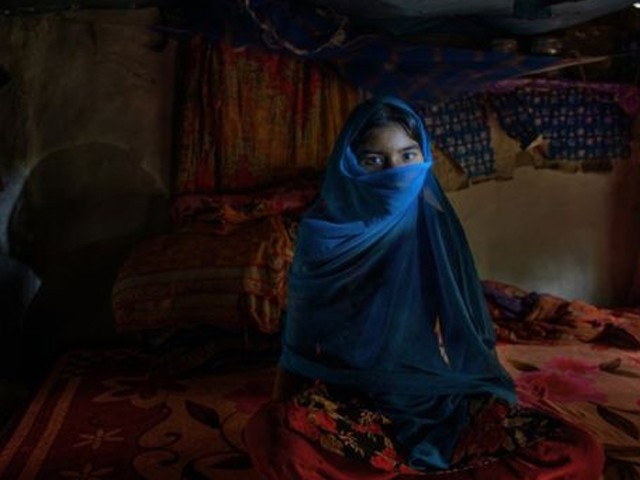 Nothing she learns in school is going to help her further in life. She has learnt to read, write, and count and that’s enough for a woman. PHOTO: SMITA SHARMA/REDUX

Life in a small town such as Mansehra is quiet and serene. The name it has been given is justified; it truly is paradise on earth. It is the beauty of the district and the simplicity of life that always attracted tourists to visit during it their vacations. But simplicity, even though it is quite pleasing, has some boundaries attached to it.

Saira, a young girl of the district, had lived in Mansehra all her life. She hadn’t been out to visit much either and all the contact she ever had had with the outer world was through television.

Girls in the village weren’t allowed much leisure. They were expected to stay  home and learn how to be good wives and mothers eventually. But Saira always dreamt of living in a world where nobody stopped her from doing anything, where girls had equal rights and opportunities as boys. However, she could only imagine a place like that in her mind, because in real life she wasn’t even allowed to go outside to play. And despite her dreams and wishes, she was not a rebel, just a young girl with dreams.

But the restrictions never stopped Saira. For instance, today she had escaped from right under her mother’s nose to go sit by the street and observe people for a while. She was thinking about how long she’d be allowed to sit and breathe the fresh air freely outside. And just like that, her mother called to her right at that moment.

“Saira, come inside this instant! I don’t want to hear any excuses now.”

To be fair, her mother had called out to her five times in the last 15 minutes. This time, Saira unwillingly dragged her feet inside, adjusting her dupatta on her head. It wasn’t even late, why wouldn’t her mother let her play outside for a while?

“How many times have I told you not to go outside? Girls are supposed to stay at home. Why is it so hard for you to understand?”

Her mother glared at her as if she had committed a crime.

“But why, Ma? Didn’t you see yesterday in that drama serial we were watching? How great and confident that girl looked, driving all by herself around the city.”

Saira’s eyes glinted with hope to live a life like that someday. But her rebellious ideas had never excited her mother, and they didn’t impress her today either.

“Ma, I have. And I am not being disrespectful, but I don’t understand why I can’t just go outside. I am not asking for much, am I? Why does everyone keep telling me that it’s not considered good? You, Abba, Dada, Taya Abba, you are all the same. Nobody states a reason for it.”

“You’re questioning our lifestyle? Saira, do you hear yourself? Where is this coming from? Do you hear what the TV has done to you? You’re questioning your elders. And then you tell me to allow you to go outside? You have been spoilt enough as it is. And now, it’s like you don’t even care what we tell you. You used to be such a good girl when you were a child, always obeying us without question. But more than any of us, you always respected and obeyed your Taya Abba. You always said he told you the right things. But now, it’s like you don’t even listen to what he says.”

“Ma, you’re not listening to me. You always guilt trip me into feeling bad about what I say. But today, I am going to say it all. I don’t like to stay at home all the time. I like to go out, take a walk, breath in the fresh air. And as far as Taya Abba’s concerned, I don’t think I believe what he says anymore.

Did you listen to what he was telling me last week? I don’t believe that. I don’t believe Allah created women to stay at home and care for their families only, that women are pure and innocent and their innocence would be ruined by the world outside. I think all individuals were made equal and if girls are supposed to stay inside then so should boys.”

Saira was fuming with anger. She had had enough of her parents’ and her Taya Abba’s illogical teachings.

“Saira! Don’t you dare say anything negative about your elders. We know better than you. It is all because of that cursed TV in our home. It’s turning you into a rebel and you do know that rebels are punished by Allah, as well as by society. Or do you not believe that anymore either?

Listen to me, clearly. You want to know why we stop you from roaming around town? The women who go out alone, they’re the ones who get kidnapped or even raped. They are the ones who surely have affairs, illegitimate relationships – even illegitimate children! Do you want that? Do you want to turn yourself into a girl like that? Do you want to be a disgrace to your family? Women who are always outside are exactly like that, going around walking all over town, putting themselves out to show to the world.”

Saira knew she had made her mother angry. She wanted answers to her question, but this talk was making her very uncomfortable. Affairs? Kids? Who said anything about that? She lowered her eyes to avoid her mother’s piercing stare.

Ma took a deep breath to calm herself and continued,

“Now look at me. Look at how I never go out of the house, even when I am sick and have to go to the doctor, your Abba always says I am pure and he is so happy with me. Your Taya Abba said I would go to jannat (heaven) for doing as Allah wanted me to. We want you to follow in my footsteps, so that we can be successful as parents in order for Allah to be happy with us.

My dear daughter, I tell you all this to guide you, not to scare you. I just want you to be pure, to protect our reputation. Please don’t dishonour us by going out all the time. I don’t want people to make wrong assumptions about you.”

Saira was not convinced, but she knew better than to continue this argument any further. She had so many questions. Did Allah really want women to stay inside and never go out? Are women really weaker than men? She knew she wasn’t. She could do anything her younger brother Afzal could. She even beat him in a race once. And what was all that about affairs and putting on a show? If that was true, then why did it only apply to girls? Boys go out all the time, why don’t they attract any assumptions?

But most importantly, the question that she could not shake off was, is it true that the honour of her family lies in her house-arrest? But all she wanted to do was to go out for a walk, to see all the people going about their work. Does looking at people bring dishonour? If it does, then why hasn’t their family already been dishonoured, as her Abba and Taya Abba sat out in the street in the evenings every day and stared at all the people?

Saira walked to her room thinking that maybe there was something that people misunderstood or didn’t know about honour. Whatever it was, it couldn’t be so weak and be ruined just by a woman walking out alone.

A month later, on Saira’s 13th birthday, her mother invited a few of their relatives over for dinner. Saira was so happy she was 13. It always seemed like a big number to her. She was extremely excited to finally call herself a teenager.

By nine o’ clock, almost everyone had left, except for her Taya Abba. But she knew he’d leave soon for Isha prayers.

She really liked him when she was younger. He used to bring candies for her and Afzal whenever he came over. But now, restrictions had replaced candies, and she didn’t like that at all. Whenever he came over, he put weird ideas about her in her parents’ head, the repercussions for which she paid later. And sure enough, this time wasn’t any different.

“I have to talk to both of you. It’s important.” He told her parents. Saira knew the drill. She pretended to leave the room, while she would actually hide under the window and listen.

“Saira is 13. You have to pull her out of school. It’s crucial that she no longer attends school, not even a day more.”

Taya Abba said in his guttural voice and Saira’s heart skipped a beat. The hours she spent in school were the best part of her day. She tucked her dupatta behind her ear to listen clearly.

“But… bhai sahab, she is still young. She needs to learn.”

Her mother tried to reason, but her father cut her off.

“Silly woman! You think you know more than bhai sahab? He must have his reasons for saying something like this.”

“I do.” Taya Abba continued.

“But I can’t tell you everything. What I can say is that she is growing up. Nothing she learns in school is going to help her further in her life. She has learnt to read, write, and count and that’s enough for a woman. I wanted her to drop out of school a lot earlier. The things that happen in this world to young women — if only you knew!”

Girls have no business going out every day. No good can ever come out of that. She just needs to learn the Holy Quran and house-work. She can learn all about house-work from her mother. And for the Holy Quran, she can come to me.”

The author is a young and ambitious writer who loves photography.

Series 6 Was I a threat? Part 3 The dead princess